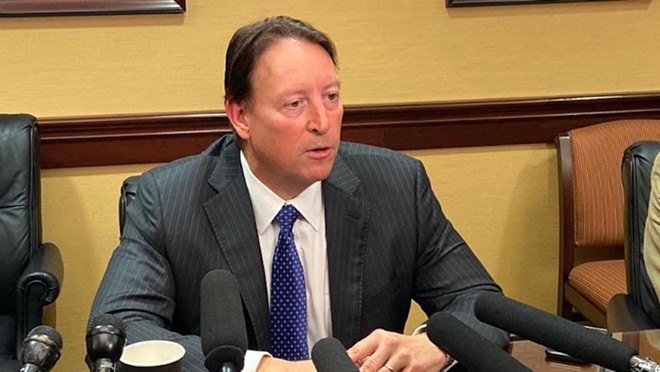 Photo via News Service Florida
Senate President Bill Galvano defended the need for Florida to market its tourism industry against negative images of hurricanes and polluted waters, as a battle is again shaping up with House leaders over the future of Visit Florida.

Addressing reporters Tuesday in his office, Galvano, R-Bradenton, said his House counterparts and other Visit Florida critics make valid points that regular tourism marketing can be handled by local governments and businesses. However, Galvano said Visit Florida, a tourism-marketing agency that receives public and private funding, is needed to offset negative media attention.

“There are certain things we do have to message and mitigate,” Galvano said. “For example, whether it’s Zika (an outbreak of the Zika virus in 2016) that cost our tourism industry millions, tens of millions of dollars. You have red tide issues. Algae. Hurricanes. Things that are important to re-message or explain. Just a straight up advertising, ‘Come to Florida,’ I would agree we have private business interests that can do a good job of that on their own.”

House Speaker Jose Oliva, a Miami Lakes Republican who has supported eliminating Visit Florida, reiterated in a newspaper column this month that tourists would still be drawn to Florida without the state taxpayer-paid promotional efforts.

“The Spanish built St. Augustine and they came. Henry Flagler built a railroad to nowhere and they came. And a man from Missouri named Walt built in the middle of Florida and they came by the millions,” Oliva, R-Miami Lakes, wrote. “Florida is the ‘it’ that people want to come see. And there are plenty of private and government marketing efforts underway every day.”

Oliva’s column pushed back against newspaper editorials and people supporting Gov. Ron DeSantis’ proposal to maintain $50 million in funding for Visit Florida next fiscal year and against bills (SB 362 and HB 213) that would keep the tourism-marketing agency operating through Oct. 1, 2028.

“Most people don’t know that nearly all of the 67 counties collect the ‘local option tourist tax’ and county agencies like Tourism Development Councils (TDCs) spend that money on tourism and marketing and other activities to draw visitors,” Oliva wrote. “In 2019, Florida’s counties collected over $1 billion in revenue. You read that right, that’s 1 billion with a B.”

Lawmakers this fiscal year cut Visit Florida’s funding from $76 million to $50 million. Visit Florida fired 44 of its 135 workers to carry out the funding cut.

House leaders in recent years questioned some of Visit Florida past contracts, including $1 million for rapper Pitbull to market the state, $1.25 million to sponsors of the British football club Fulham and $2.9 million to sponsor an IMSA racing team.

Galvano said the earlier criticism and funding cuts have forced the agency to become more “efficient and focused.”

Visit Florida President and CEO Dana Young, a former state lawmaker from Tampa, has argued that after Hurricane Michael, the agency undertook a $5 million marketing campaign needed to counteract an estimated $35 million in negative media coverage.

“I think we saw it today; (the media) can’t help but keep putting pictures of destruction rather than printing pictures of hope and rebuilding,” Young told lawmakers as the one-year anniversary of Michael approached in October.

Oliva has dismissed concerns that tourism would be hurt without Visit Florida’s promotional efforts, saying tourism growth in the state has stemmed from factors such as people having more disposable income.

Proponents of the agency have argued that 1 percent growth in tourism in the third quarter of this year, after the funding reduction went into effect, is a sign that tourism is slowing and that more marketing is needed.