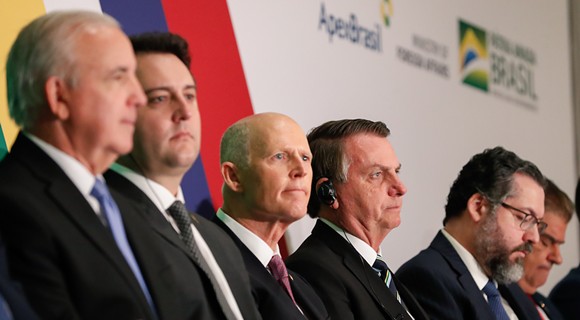 Photo via Rick Scott/Twitter
Scott spoke at the Brazil-US Business Relations Seminar on March 10
This afternoon, Florida Republican Senator Rick Scott announced that he is under a self-imposed quarantine after potentially making contact with a Brazilian delegate who has tested positive for the coronavirus.

Scott sent out the following statement on Tuesday afternoon:


“My office was alerted today by the Brazilian Embassy that a member of President Bolsonaro’s delegation tested positive for Coronavirus. On Monday, I met with the President in Miami, and while I do not believe I interacted with the infected person, that individual was in the same room as me. The Embassy said the person had no symptoms leading up to or the day of the conference. After consulting with the Senate’s attending physician and my personal doctor, I have been told that my risk is low, and I don’t need to take a test or quarantine. However, the health and safety of the American people is my focus and I have made the decision to self-quarantine in an abundance of caution. I am feeling healthy and not experiencing any symptoms at this time. I will still be working on my plan to combat Coronavirus and protect American families, and my offices in D.C. and throughout the state will still be fully operational to help Floridians.”

Photo via Instagram
Wajngarten (far right) tested positive for coronavirus days after this photo was taken at Mar-a-Lago.
According to the Washington Post, the Brazilian official, who has been identified as Fabio Wajngarten, communications secretary to Brazilian President Jair Bolsonaro, also met with Sen. Marco Rubio, President Donald Trump and Vice President Mike Pence while visiting Mar-A-Lago in Florida. The president has since said he “isn’t concerned.”

Earlier this week, a photo circulated showing Wajngarten alongside President Trump and Pence during his visit to Florida.

Wajngarten was reportedly in the United States as part of a presidential delegation to meet with U.S. officials, which apparently included Rick Scott.

The senator has since canceled a Thursday press conference, where he planned to outline plans to deal with the coronavirus outbreak.