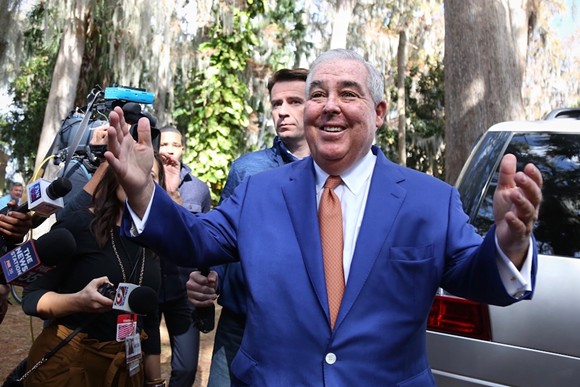 Photo by Joey Roulette
The Florida Restaurant and Lodging Association president is "deeply offended" by comments made by Orlando attorney and political advocate John Morgan, who referred to the state's minimum hourly pay rate as "slave wages."
Morgan made the comments at a Tiger Bay Club gathering in Tampa on Friday, where he noted the state's $8.46 minimum wage requires people to work two or three jobs just to stay afloat, often while collecting government relief such as housing subsidies and EBT food assistance.

Morgan told the gathering, “Years ago in the South, they said the economy will not work if we don’t have slaves," according to Florida Politics. "They were so adamant about it they went to war over it. They fought each other to own people.”

The attorney, who has drawn criticism for not paying his own employees a $15 minimum, also said he’s willing to go to war to end "slave wages."

In a statement Monday from the Florida Restaurant and Lodging Association, CEO and president Carol Dover expressed anger at Morgan's words.
“Mr. Morgan has made his position on minimum wage clear by leading the charge to get a constitutional amendment on the ballot next November. While I respectfully and vehemently oppose his position on this issue, I am deeply offended by his remarks on at the Tampa Tiger Bay Club on Friday. By referring to minimum wage as ‘slave labor,’ Mr. Morgan showed us all just how tone deaf he is and how utterly oblivious he is to a very real problem in our state," said Dover in the statement.
Morgan is funding a campaign to raise Florida’s minimum wage to $15 an hour, starting with $10 an hour starting Sept. 20, 2021, and then a $1-per-hour increase each year until 2026. His ballot initiative, called Florida for a Fair Wage, is only several thousand petition signatures short of the 766,200 needed to appear on 2020 ballots.

Dover condemned Morgan's comparison of current wages to slavery, one of America's deepest injustices with deep societal outcomes that persist today.
“His comments likening his fight for a $15/hour minimum wage to the fight of abolitionists who worked to end slavery are an affront to every man and woman who was jailed, beaten and branded for trying to protect the lives of their fellow humans," said Dover, who also said Morgan's comments overlook the issue of modern-day human trafficking.
“Furthermore, Mr. Morgan’s statements highlight his ignorance regarding the modern-day slavery we are actively working to stop, human trafficking. This heinous crime is real, and there are men, women and children in the United States who are literally enslaved because of human trafficking. Drawing comparisons between their plight and those who work for minimum wage is disgusting, cold-hearted and insulting to both groups."
Dover made no mention of the condition of workers who serve restaurant diners and clean hotels rooms in Florida, who are often paid the lowest wages, to the point of lowering wages overall in the area. According to local columnist Scott Maxwell, the result is that Central Florida has the lowest median income of any major metro in the U.S.
“Minimum wage is an important issue facing our state, and the debate should be robust and vigorous, not convoluted with inaccurate and insensitive comparisons to abhorrent crime,” Dover said.

The Florida Restaurant and Lodging Association vehemently opposes the minimum-wage increase, with 55 percent of minimum wage workers nationwide holding jobs in the restaurant and leisure industry, according to the Pew Research Center.