Florida Rep. Matt Gaetz says he would resign his seat to defend Donald Trump during impeachment trial if asked 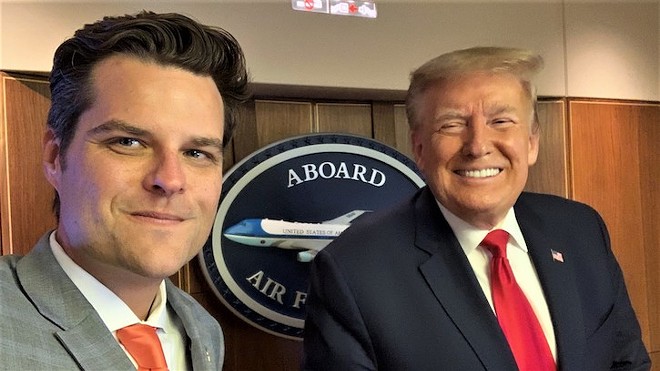 Photo courtesy Congressman Matt Gaetz/Facebook
As Donald Trump's second impeachment trial draws ever closer and the former president's legal team remains in a state of flux, Florida Rep. and Trump superfan Matt Gaetz on Wednesday expressed willingness to do anything to defend Trump. And that includes resigning his own seat in the House of Representatives.

In news that was surely music to the ears of a good percentage of Floridians, Gaetz, during an appearance on Steve Bannon's podcast "War Room Pandemic," let it be known that there are few limits to how far he'd go to stand up for Trump.

As reported by Talking Points Memo, Gaetz bemoaned Trump's current "low energy" defense team, and then said that he would "absolutely" resign his seat in Congress to join Trump's defense — if Trump asked — and that it would be "the top priority of my life."

Given that Gaetz was one of 13 Florida Republicans to vote to overturn the results of the 2020 presidential election, it goes without saying that this man stans Trump hard. And yet Gaetz did indeed say it. Poetically, even.

Listen to your heart, Mr. Gaetz. You know what you have to do.