The disgraced pol was also the sponsor of 'Don't Say Gay' bill. 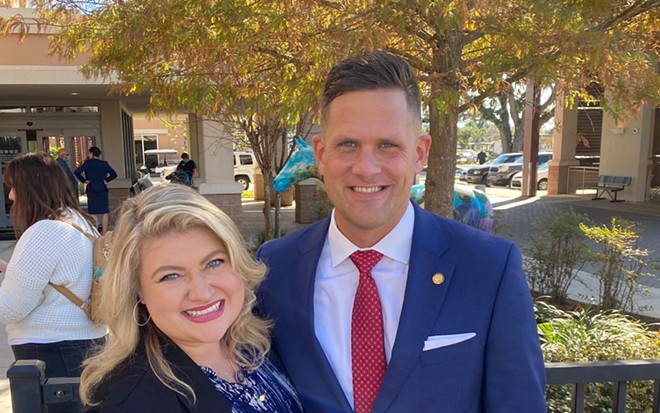 It took about 24 hours for state Rep. Joe Harding to resign from his House seat after news broke this week that the Ocala Republican had been charged with fraudulently obtaining coronavirus-related business loans.

The U.S. Attorney’s Office for the Northern District of Florida announced Wednesday that a grand jury indicted Harding on charges of wire fraud, money laundering and making false statements. The charges involve an alleged scheme to defraud the Small Business Association’s Economic Injury Disaster Loan program designed to help businesses recover from the pandemic’s effects on the economy.

Without commenting on details of the case, Harding contended in a prepared statement Thursday that he “repaid every penny” of the more than $150,000 that the 12-page indictment said Harding “obtained and attempted to obtain” through the alleged scheme.

“There will be a time when I can tell my story in detail, and I will,” Harding said in the statement. “For now, let me reassure my constituents and the taxpayers that I repaid every penny of the loan I obtained, and I have done my best to cooperate fully with all authorities.”

A financial-disclosure form filed with the state listed Harding’s net worth at $456,564 at the end of 2021.

Harding’s resignation garnered headlines throughout Florida and nationally, in large part because he sponsored a high-profile and controversial education measure that passed during the 2022 legislative session.

The measure, which in part prohibits classroom instruction about sexual orientation and gender identity in early grades, was formally named “Parental Rights in Education” by Harding and other supporters, but was disparagingly labeled “don’t say gay” by critics.

Gov. Ron DeSantis signed the measure in March, calling it a move toward “curriculum transparency.”

Harding referred to the controversy about the bill in his statement Thursday.

“During the 2022 legislative cycle, when I was under incredible heat regarding my defense of Florida’s parents and families, many were frustrated that I didn’t respond to every critic in the media. I didn’t respond to every critic because the critics were not my constituents,” he wrote. “Florida’s families were, and in this instance, they still are.”

Harding, 35, was first elected to the House in 2020. He ran unopposed this year in Marion County’s House District 24.

In his resignation letter to House Speaker Paul Renner, Harding wrote that the legal issues will “require my complete focus,” and that “now is the time to allow someone else to serve my district.”

Renner, R-Palm Coast, stripped Harding of his committee assignments after the indictment was announced Wednesday.

“After further consultation with Representative Harding, I understand and respect his decision to submit his resignation. Any questions about his case should be directed to his legal counsel,” Renner said. “The Florida House remains focused on next week’s all-important special session on property insurance, hurricane recovery and toll relief.”

Harding made an initial court appearance Wednesday and was released on a $10,000 bond, court records show. A trial is scheduled Jan. 11 in Gainesville.