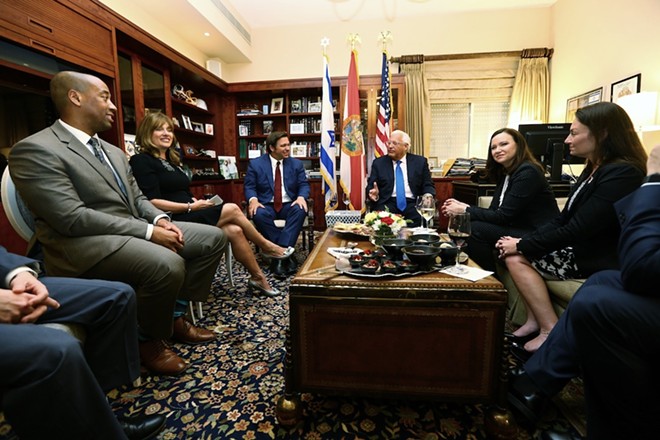 photos courtesy Office of the Governor
Gov. Ron DeSantis meets with the U.S. Ambassador to Israel, David Friedman
A Tallahassee judge on Tuesday dismissed a lawsuit brought against Gov. Ron DeSantis and the Florida Cabinet by open-government advocates, who made a last-ditch effort to stop a Cabinet meeting in Israel because they argue it will violate the state’s open-meeting laws.

The lawsuit, filed by the First Amendment Foundation and four major news organizations, accused the governor and Cabinet members of “willfully violating the law” for trying to hold a Cabinet meeting Wednesday at the U.S. embassy in Jerusalem, about 6,000 miles from the state Capitol.

“Holding a meeting at this distance in such a facility violates the constitutional and statutory rights of Florida citizens (and the news media) to personally observe the workings of, and for the public to offer comment to, their state’s highest officials,” the complaint said.

Hours after the suit was filed, though, Leon County Circuit Judge Angela Dempsey dismissed the case because the governor and Cabinet members had not been served, said Barbara Petersen, an attorney and president of the First Amendment Foundation. She said the plaintiffs were filing an emergency motion for reconsideration.

The governor’s office, through spokeswoman Helen Ferre, declined to comment due to the “pending litigation.” Lauren Schenone, a spokeswoman for Attorney General Ashley Moody, who is named in the suit, said in a statement the office was prepared to fight the allegations.


DeSantis first announced he would make an official trip to Israel on April 9, fulfilling a campaign promise of becoming “the most pro-Israel governor in America.”

“We fully intend to comply with the Sunshine Law and defend this lawsuit,” Schenone said in a statement.

The complaint alleges the governor and the Cabinet, made up of Moody, Agriculture Commissioner Nikki Fried and Chief Financial Officer Jimmy Patronis, have refused to make the meeting open to the public, including holding it at a time and place that provided a “reasonable opportunity to attend.”

The meeting is scheduled for 8:30 a.m. Eastern time Wednesday. In recent days, state officials have described the meeting as “ceremonial” and said it would be livestreamed by The Florida Channel, which provides televised coverage of government meetings.

DeSantis first announced he would make an official trip to Israel on April 9, fulfilling a campaign promise of becoming “the most pro-Israel governor in America.” He also indicated plans to hold the first-ever Florida Cabinet meeting in Israel, but details about the meeting’s agenda were released to the public last week, a few days before state officials were set to depart.

“The reason to challenge tomorrow’s meeting of the Florida Cabinet was not lightly made — it came after long deliberation and many discussions of both public policy and issues,” Petersen said.

Her organization was joined in the case by the Miami Herald, the Tampa Bay Times and the Gannett and GateHouse Media news organizations, to “make clear, there are legitimate concerns regarding the constitutionality of holding a Cabinet meeting that Floridians cannot attend,” Petersen added.

Under Florida’s Sunshine Law, the public must be given reasonable notice of the location, time and date as well as the issues that are set to be addressed and discussed at a public meeting.

The Sunshine Law also prohibits a public meeting from being held at a place that “operates in such a matter as to unreasonably restrict public access to such facility.” The lawsuit points to this provision to argue that last-minute guidelines issued by the U.S. embassy in Jerusalem limited reporters’ and the public’s ability to use laptops and cell phones out of “security concerns.”

The governor’s office shared those guidelines on Saturday, when reporters and members of the nearly 100-people delegation were set to fly overseas. Ferre, in a statement, apologized for the restrictions, according to a report by the Tallahassee Democrat newspaper.

“It is what it is, my sincerest apologies for the inconvenience, it is the only place and time this will occur during the trip unless there is an emergency,” Ferre said.

If Tuesday’s emergency motion for reconsideration is turned down and the meeting is held as scheduled, Petersen said the First Amendment Foundation and media organizations likely would amend their complaint to seek a declaratory judgment. She said that would involve “asking the court to say the Cabinet shouldn’t have done what it did and won’t do it again.”