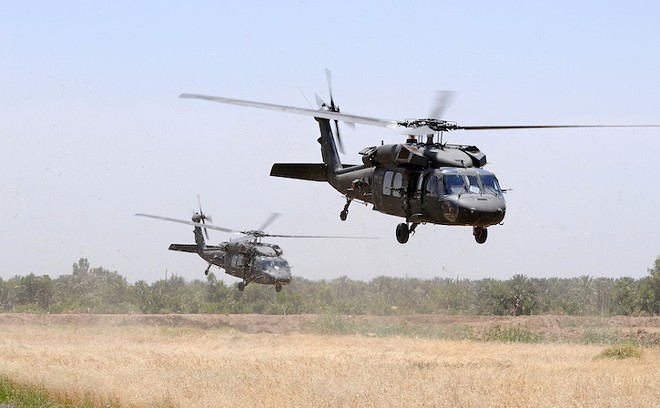 The thief, wearing camouflage gear and gloves, crept through the woods onto the Army base in southern Alabama where most of the U.S. military’s helicopter pilots train. His objective: Collecting sandbags he had filled with used 30 mm brass shell casings from the attack helicopters flying and firing over the base’s range during practice missions.

With the value of scrap brass rising – and each round of 30 mm ammunition longer than an adult’s outstretched hand – every haul of loaded sandbags could have been worth thousands of dollars. It had been harvested from an area on Fort Rucker off-limits to civilians. It’s the latest in a long string of thefts of increasingly valuable brass from American military bases across the country, a problem that has plagued the armed services since the early 2000s.

In this case, Army criminal investigators believe their suspect stole nearly $40,000 worth of ammunition brass over months but accidentally left behind clues to his identity pointing back to Florida: two Gatorade bottles with trace amounts of DNA.

Far from the wooded foot trails of Fort Rucker in Alabama, the mystery of the stolen ammunition brass may have been solved after months of work by Army scientists in a laboratory in Georgia – a plot worthy of a primetime crime drama.

In federal court records, a military detective said the DNA on the Gatorade bottles belonged to Eric Lee Culpepper Sr., 44, of Crestview in Florida’s Panhandle, about 80 miles southwest of Fort Rucker. The court documents were filed in U.S. District Court for the Northern District of Florida under a name and a case number with no obvious references to Culpepper, who was separately identified on sheriff’s arrest warrants as a former grave digger and construction framer.

Investigators said Culpepper pawned an estimated eight tons of ammunition brass at a scrap metal recycling company for $37,242 between February and October last year, court records said. The Army said it otherwise would have paid a vendor to collect the brass casings from the range for its own recycling.

Culpepper has not been charged in the ammunition brass thefts in Alabama, even though four months have passed since investigators collected fresh DNA from Culpepper to compare against the crime scene. It took roughly the same amount of time after investigators submitted the Gatorade bottles for the lab scientists to report a match to Culpepper’s DNA.

Culpepper, who turns 45 on Saturday, could not be reached for comment. He did not return phone calls and social media messages for over seven weeks. He also did not return messages left with his lawyer, ex-wife, former employers or his friends and connections on his social media accounts.

In Alabama, the ammunition brass thefts were uncovered in April after training rangers notified the Fort Rucker police station that they had found six sandbags of 30-millimeter brass shell ammunition casings alongside a trail in a wooded training area.

“The Apache is the Army’s gunship,” said Cummings. “So, when our Apaches fire during their training where they learn to engage charges from the helicopter, all these casings fall to the ground in the impact area.”

Those areas at Fort Rucker are off limits to the public and are secured by gates with signs warning that no one is allowed to enter by order of the base’s commanding officer, Cummings said.

In the same area as the sandbags full of spent casings, investigators also found a non-military grade camouflage backpack that contained a camouflage long-sleeve shirt, a pair of leather gloves and a pair of cloth gloves. Next to the backpack lay the two Gatorade bottles.

Scientists at an Army crime lab in Forest Park, Georgia, matched a DNA sample from those bottles to Culpepper in September 2021 using the Combined DNA Index System, or CODIS, according to an affidavit filed in federal court as part of a request for a search warrant. In November, detectives obtained a fresh DNA sample from Culpepper to use in the investigation.

Culpepper’s DNA was in the CODIS national database, run by the FBI, because of a more than 20-year criminal history, including two outstanding arrest warrants for contempt of court in a domestic violence case and failure to appear in court for a misdemeanor traffic infraction, according to Okaloosa County Sheriff’s Office and circuit court records.

Investigators have evidence that Culpepper drove the scrap metal from the base in Alabama to Florida. There, he visited a pawn shop, Renew Recycling, in Pensacola over 50 times from February to October 2021 to sell the casings, sometimes on consecutive days. The sales totaled $37,242, according to court records.

Pawnshops are required by state law to keep identification records for every customer. Renew Recycling had Culpepper’s ID and his thumbprint after at least one transaction, court records said.

Culpepper may have undertaken the numerous trips to the pawn shop, never making a sale of more than $2,000, in order to evade federal anti-money laundering rules that transactions of $10,000 or more must be reported by the business to the IRS.

The price of red brass in Florida is roughly $2.25 per pound. Each 30 mm ammunition casing is about one pound. It would take someone reselling more than 16,000 casings to amount to the $37,242 that Culpepper allegedly earned from his transactions.

The federal court records outlining the case against Culpepper were obtained by Fresh Take Florida, a news service at the University of Florida College of Journalism and Communications.

It wasn’t clear how or whether the federal investigation was progressing. It can take weeks or months for detectives to build a case for federal prosecutors, who also would be interested in identifying everyone who might have been involved in the caper.

The federal prosecutor listed on the court records, Walter Edward “Ward” Narramore II in Tallahassee, did not return phone messages or emails over six days asking to discuss the investigation.

The Okaloosa County Sheriff’s Office confirmed this week it also was looking to find Culpepper to arrest him after he failed to appear in circuit court in January for a misdemeanor case accusing him of violating a domestic violence protection order that had been in place since 2017. Court officials separately suspended his driver’s license in August over an unpaid $47.60 traffic violation.

In neighboring Santa Rosa County, Culpepper pleaded no contest earlier this month in an unrelated case to felony and misdemeanor drug and traffic charges, after a sheriff’s deputy said he found a small amount of methamphetamine and a syringe in his car during a traffic stop in December. Circuit Judge Darlene Fallon Dickey withheld adjudication on the felony drug charge and sentenced him to jail time he had already served of two months and 24 days, plus two years’ probation, court records showed.

Culpepper was in jail in that case during at least part of the time that deputies in the adjoining county were looking for him on two active warrants, and released earlier this month without giving them an opportunity to re-arrest him.

Despite the prevalence of cases like this across the country, Cummings said that they are not frequent at Fort Rucker. Only one other case like this occurred, in 2015. Investigators found that a group of people was regularly driving up from Florida to pick up brass during the night and return to the Sunshine State to sell the stolen goods as scrap metal, he said.

“We have great security here,” he said. “That’s not a routine thing.”

___
This story was produced by Fresh Take Florida, a news service of the University of Florida College of Journalism and Communications. The reporter can be reached at [email protected]