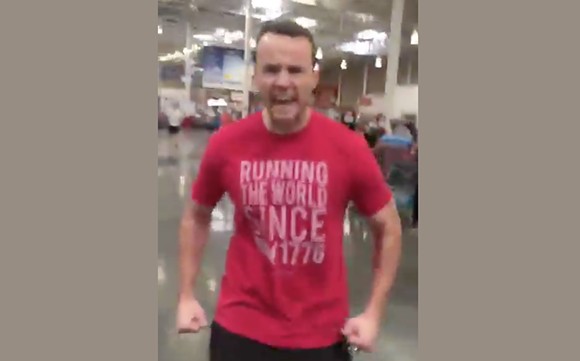 A video of a man yelling in a Lee County Costco resulted in him losing his job.

The viral video, which has been viewed over 11 million times, was posted on Twitter Monday, and shows Fort Myers resident Daniel Maples in flip-flops and a “Running the world since 1776” T-shirt, shouting “Back the f—- up, put your f——ing phone down.”

The video reportedly begins shortly after Maples was asked why he was not wearing a face mask. Face masks are required at all Costco locations and have been since May 4.

Florida man at Fort Myers Costco in "Running the World Since 1776" shirt flips out on elderly woman who asked him to wear a mask and man who defended her #BecauseFlorida (via @profjaffar) pic.twitter.com/PDOvi33qHK

Florida-based filmmaker Billy Corben, who initially posted the video, wrote in a tweet that one of the targeted customers said, "To give Costco the credit, they escorted him out and made me wait inside and monitored him until he left and then they send someone with me to the care to make sure I'm OK."

Within 48 hours Maples was identified, along with his place of work, Ted Todd Insurance.

On Tuesday Ted Todd Insurance confirmed Maples’ firing in a tweet reading, “Thank you to everyone for their comments and messages raising awareness about a former employee at Ted Todd Insurance. Their behavior in the video is in direct conflict with our company values and their employment has been terminated.”

Ted Todd Insurance CEO Charley Todd took to Twitter Tuesday as well to clear the air, writing, “He absolutely does not represent our values and no longer works at our agency. We are working with Allstate to release a statement shortly. Wear a mask.”

The company asked for any “further feedback” to be sent to its Human Resources email address, adding, “Threatening behavior and intimidation go against our core mission to be trusted advisors in our community. We are also committed to immediately reviewing our internal existing culture at TTI.”