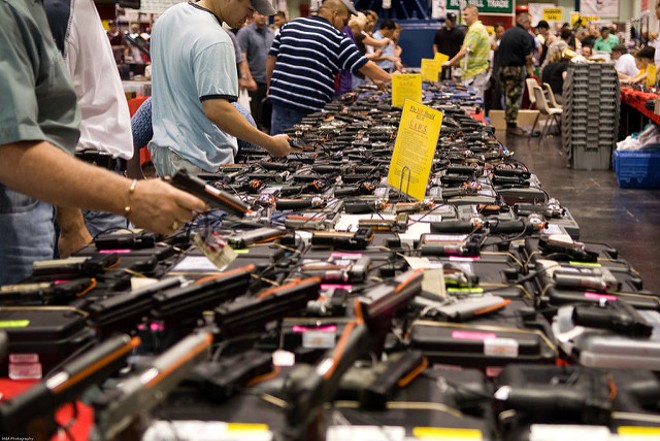 Photo by M&R Glasgow via Flickr
Floridians with concealed-weapons licenses would be able to carry firearms into areas now deemed "gun-free" under an array of measures that will be championed by Republican lawmakers during the first legislative session since mass killings at an Orlando nightclub and a Fort Lauderdale airport.

Proposals have been introduced to allow the more than 1.7 million people with concealed-carry licenses to bring guns to places such as college and university campuses, airport terminals and government meetings.

Gun-control advocates are also back in the Capitol opposing the expansion of concealed-carry laws or calling for limits on the kinds of guns and ammunition that can be sold. But after a couple of years in which groups such as the National Rifle Association and Florida Carry haven't gotten their big-ticket items to Gov. Rick Scott's desk, Second Amendment backers hope their targets are in sight for the annual legislative session that starts March 7.

"Why don't we just say in certain situations, let's try it. Let's just try something different for a while, let law-abiding citizens exercise their Second Amendment right," House Speaker Richard Corcoran, R-Land O' Lakes, said. "I support it all. Until someone can show me one stinking fact, statistic that says this is worse than the current situation, I absolutely am supportive of it."

Not everyone wants to "try it," and they intend to be loud and vocal, even if they know they remain politically outgunned at the GOP-dominated Capitol.

Florida was rocked in June by the shooting deaths of 49 people at the Pulse nightclub in Orlando, followed by the fatal shooting of five people in January at Fort Lauderdale-Hollywood International Airport,

Michelle Gajda, the Florida chapter leader for Moms Demand Action for Gun Sense in America, believes most Floridians, based on polling and reactions after the Orlando and Fort Lauderdale shootings, want some reasonable controls on the proliferation of guns.

"We don't expect to win every battle, but we will be at every battle, with our evidence and with our data," Gajda said. "We believe eventually we will prevail and common-sense gun reforms will begin to pass in Florida."

Gajda expects to oppose each pro-gun measure as it comes up in committee.

"We haven't ranked them in any particular order. It's kind of a cacophony of horrors, and so were focused on fighting them all," she added.

One of the first bills that the Senate could take up when the session begins would shift the burden of proof from defendants to prosecutors during pre-trial hearings in "stand your ground" self-defense cases (SB 128). The bill has made it through Senate committees.

Supporters say the measure strengthens the state's self-defense laws, but critics contend the measure will short-circuit cases before all the facts are revealed. The potential change died last year in the House, but this year's version of the proposal (HB 245) needs to only make it through one more committee before it can go to the full House.

Overall 39 bills, resolutions and resolution-like memorials have been filed so far that include language relating in some aspect to firearms and the Second Amendment.

Republicans account for 26 of the bills, including 10 by Sen. Greg Steube, a Sarasota Republican who chairs the Judiciary Committee, which is expected to be the first committee stop for many of the firearm proposals.

Senate President Joe Negron's appointment of Steube as chairman of the committee had added significance for many people involved in gun debates. Former Judiciary Chairman Miguel Diaz de la Portilla, R-Miami, was an impediment the past two years to some major pro-gun measures. Diaz de la Portilla was defeated in his re-election campaign last year.

Some of the proposals filed for the 2017 session are linked, for example, to issues such as a proposed constitutional amendment (SJR 910 and HJR 291) that would ask voters to exempt law-enforcement officers from a three-day waiting period for purchasing handguns.

The biggest legislative fights, however, likely will center on bills related to where people can carry guns.

Steube has said one of his top priorities is a bill (HB 6005) that would allow people with concealed-weapons licenses to carry firearms on college and university campuses. University-system leaders have vehemently opposed such proposals in the past.

Also, Steube has said a priority is a proposal (SB 618 and HB 6001) that would allow people to carry guns in airport terminals.

"Given what's happened at Fort Lauderdale airport, that's important to me," Steube said.

Negron, while noting he has strongly supported the bill about changing the burden of proof in "stand your ground" cases, said he's leaving other bills up to committee chairs to advance.

Democrats have also filed a number of measures seeking to counter the pro-gun bills. The proposals include such ideas as banning the sale of large-capacity ammunition magazines and expanding criminal-history checks on firearm buyers. However, the Democratic proposals aren't expected to move forward in the Republican-controlled Legislature.

It remains unclear how many pro-gun bills can gain enough support to pass during the session. But Florida Carry attorney Eric Friday pointed to increased support from leadership in both chambers, particularly on the Senate side, for people's right to self-defense.

"Senate President Joe Negron has always been very supportive of people's fundamental constitutional rights," Friday said. "The speech he gave in the Senate last year on the `burden of proof' bill showed he had strong belief in what we're trying to do here. … All of these issues are important. They all deal with the fundamental right that people have to protect their lives and their families."