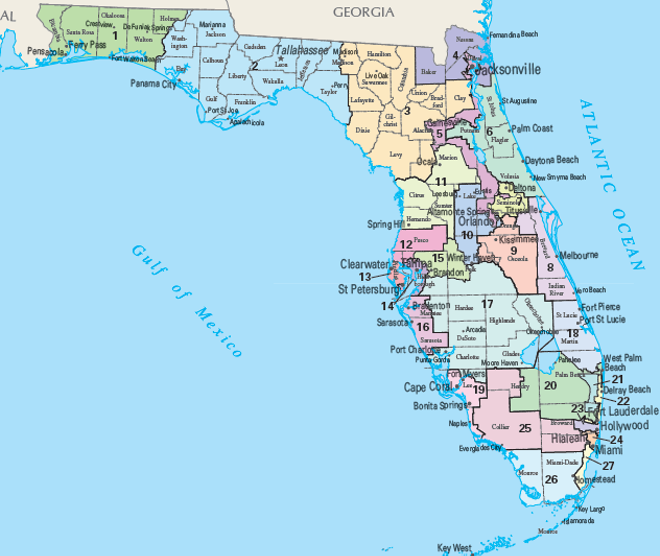 fec.gov
August will be back-to-Tallahassee time for state lawmakers.

Senate President Andy Gardiner and House Speaker Steve Crisafulli sent a joint memo to lawmakers Monday announcing that a court-ordered special session to redraw eight of the state's 27 congressional districts will begin Aug. 10 and run until Aug. 21 or until the completion of the new map.

Gardiner, R-Orlando, and Crisafulli R-Merritt Island, also directed staff from the new House Select Committee on Redistricting and the new Senate Committee on Reapportionment to work with legislative attorneys to initially draft a "base map" that complies with a July 9 ruling from the state Supreme Court.

"This map proposal will be drafted solely by staff in collaboration with counsel, without our participation or the participation of any other member, and will be provided simultaneously to all members and the public prior to the convening of the special session," Gardiner and Crisafulli wrote. "We believe that presenting a base map that follows the Supreme Court order to you and the public will make it easier to discuss all legislative actions in an open and transparent manner."

The court ruled that the districts first approved in 2012 as part of the once-a-decade redistricting process were corrupted by the efforts of Republican political consultants —- violating an anti-gerrymandering "Fair Districts" constitutional amendment voters approved in 2010.

Gardiner and Crisafulli added that they have instructed staff to avoid the political implications of the new lines, except where legally required to comply with state and federal minority voting-rights provisions, and to report any House and Senate members who make suggestions for the map that could benefit an incumbent or political party.

Brown, who has threatened to legally challenge the court ruling and who headed a group of Florida's congressional delegation members in a failed request last week for statewide hearings on the proposed lines, remains "opposed" to the call for a special session, spokesman David Simon said Monday.

Simon added that Brown continues to stand behind her July 9 comments, released after the court's ruling, in which she argued that the ruling "fails to take into consideration the rights of minority voters."

But voting-rights groups challenged the redrawn lines at the Supreme Court, which required the more-sweeping changes.

The staff-generated congressional "base map" is expected to be presented during a joint meeting of the two legislative committees on Aug. 11, the second day of the special session, according to the Gardiner and Crisafulli.

Sen. Rob Bradley, a Fleming Island Republican also tapped for the reapportionment committee, said it will follow the court ruling.

In the memo, Gardiner and Crisafulli advised lawmakers who intend to file their own redistricting bills, or even amendments to the map, to be prepared to detail every aspect of the map —- from the people involved and the criteria used by the map drawers to the impact on minorities.

This is the second time that state lawmakers will be trekking back to the Capitol since the regular legislative session ended in May.

In June, the Legislature had to reconvene for a special budget session sparked by a bitter fight within the GOP over how to handle health-care spending.