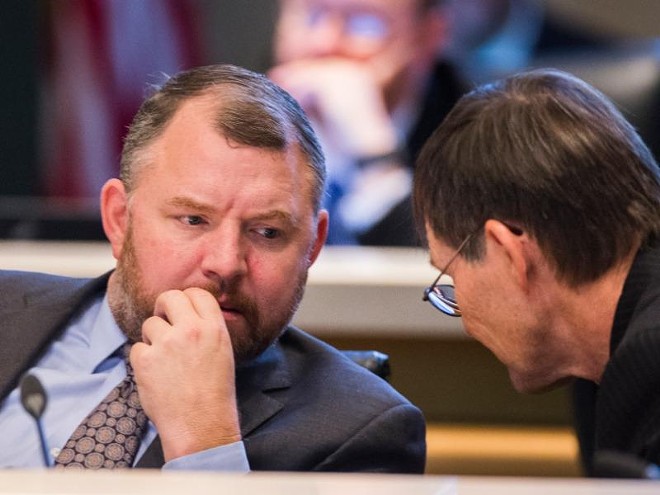 Photo via News Service of Florida
Despite a federal court ruling that Florida's clemency process is unconstitutional, state lawmakers refused Sunday to provide funding to address a backlog of former felons seeking to have voting rights restored.

The clemency review process, which is administered by the Florida Commission on Offender Review, had a backlog of 10,377 cases as of Oct. 1. Applications, under state policy, cannot be filed until five to seven years after a felon has served his or her sentence, including completing terms of probation and restitution.

Once an application is filed, it can take years for it to be processed, with one application, as of last October, pending for more than nine years.

Rouson has been a major proponent of finding more money for the Commission on Offender Review to hire temporary workers who could help speed up background investigations and allow more applications for clemency to be processed.

“This money would help get hearings and decisions for people and unlock and unjam the backlog,” Rouson said.

Sen. Audrey Gibson, D-Jacksonville, also urged legislative leaders to support some additional funding for the clemency reviews, saying it would “help people get their lives back to normal and being productive citizens in their communities.”

After agreeing with the House position, Bradley said the concerns raised by Rouson and Gibson will be taken “under advisement,” meaning it may ultimately be up to House Speaker Richard Corcoran, R-Land O’Lakes, and Senate President Joe Negron, R-Stuart, to settle the issue.

U.S. District Judge Mark Walker issued the ruling about the clemency process on Feb. 1, focusing on the arbitrariness of the system and saying it violated First Amendment rights and equal-protection rights under the U.S. Constitution’s 14th Amendment. Gov. Rick Scott’s administration, however, has defended the system, and it remains unclear how Walker might order the process to change.

House and Senate leaders are negotiating numerous budget issues as they try to finalize a spending plan in time to end the legislative session Friday. The budget will take effect July 1.

In another Sunday agreement, lawmakers agreed to spend $14.4 million in 2018-2019 on treating prisoners with hepatitis C, an infectious disease that may be impacting as many as one out of every five state prisoners.

Previously, lawmakers agreed to spend another $21 million this year fighting the disease in the prison system. Treatment can cost as much as $37,000 for a 12-week regimen.

The infectious-disease funding is one of several costly prison initiatives, which are expected to total roughly $100 million in the new budget, where state officials are responding to court settlements over the treatment of prisoners for mental health, diseases and disabilities.

On Sunday, the House backed off its opposition to spending $7.5 million on Vivitrol, a treatment that helps people in community-based programs deal with opioid and alcohol addictions. The money is part of the state court-system budget.

In addition, lawmakers agreed to spend $250,000 in the state courts’ budget on developing a texting system that would provide court-appearance alerts and other court-related information to people with court cases.

House and Senate members also continued the process of eliminating budget projects, which they predicted would happen as lawmakers scramble to find $400 million for a school-safety package, following the Feb. 14 mass shooting at a Parkland high school.

As a sign of the scope of the cuts, Trujillo and Bradley agreed to eliminate $400,000 for the renovation of the Gilchrist County jail, which is in Bradley’s sprawling North Florida district.

However, lawmakers agreed on spending $4.3 million on the Thomas Varnadoe Forensic Center for Research and Education, a forensic research and training facility in Pasco County. The project, which received more than $4 million last year as part of the Florida Department of Law Enforcement budget, is important to Corcoran, the House speaker, and Senate Majority Leader Wilton Simpson, a Trilby Republican who is in line to become Senate president after the 2020 elections.