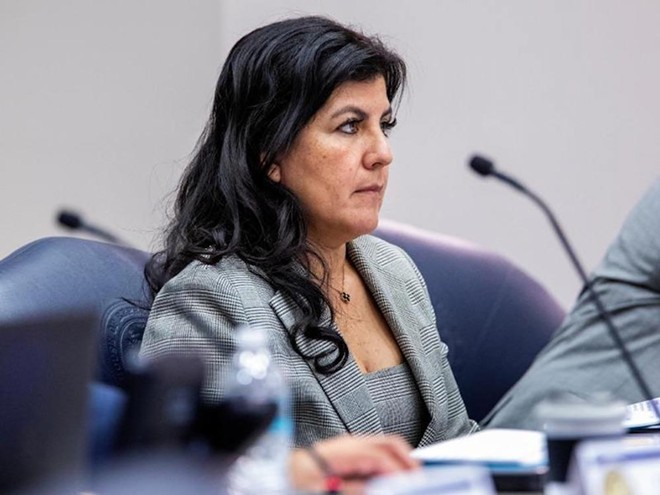 Photo by News Service Florida
House bill sponsor, state Rep. Jackie Toledo, R-Tampa
Vape shops would have to be permitted and regulated by the state, under a House effort to combat an “epidemic” of electronic-cigarette use by teens.

Under the proposal, the Department of Business and Professional Regulation, which oversees sales of tobacco products, would also have authority over retail establishments that sell e-cigarettes and other vape products. Vape shops in Florida currently are unregulated.

The House Health Market Reform Subcommittee on Wednesday overwhelmingly approved the measure (PCB HMR 20-04), despite the objections of the American Cancer Society, the American Heart Association and the American Lung Association. A group representing vape shops, however, supported the legislation.

The move to regulate vape shops comes less than a month after a federal law raising the age to purchase e-cigarettes from 18 to 21 went into effect. The effort coincides with other federal attempts to curb minors’ use of electronic cigarettes, produced by companies such as JUUL.

The move to regulate vape shops comes less than a month after a federal law raising the age to purchase e-cigarettes from 18 to 21 went into effect.

“It’s no secret that our county is facing a unique vaping epidemic that has infiltrated our halls in high schools and in middle schools,” House sponsor Jackie Toledo, R-Tampa, told the House panel Wednesday.

“The crisis was brought to the surface” following reports of lung injuries associated with e-cigarettes or vaping, she added.

According to the federal Centers for Disease Control and Prevention, there had been 2,668 reported patients with lung injuries stemming from e-cigarettes or vaping across the country as of Jan. 14. Sixty people in 27 states had died, including two people in Florida.

But representatives of the heart and cancer associations said they opposed the House plan because they do not believe it will solve the problem.

Mark Landreth, a lobbyist for the American Heart Association, pointed to ongoing disputes in Washington over the regulation of tobacco products and e-cigarettes.

He said his organization is in favor of regulating vape shops.

A better solution would be to expand the definition of “tobacco products” in Florida law to include e-cigarettes and similar products, suggested Heather Yeomans of the American Cancer Society Cancer Action Network. Such a move would mimic federal law.

The cancer society is opposed to regulating the vape shops “in this fashion,” Yeomans said.

“We do have concerns about setting up a duplicative regulatory process,” she said. “If we change the definition of a tobacco product, they (the Department of Business and Professional Regulation) are in a position to start the very next day to start enforcing the law.”

But committee Chairman Cary Pigman, a physician, said he was “absolutely shocked” that the representatives of the health-care organizations would attempt to “impede” Toledo’s measure.

“I hope everyone comes to realize the strategy behind this bill. We’re taking an unregulated business now and putting it within a regulating scheme that will stand up to any subsequent court challenge about what is meant by a word, because we recognize it as something different. She’s not providing a judgment. There’s not some evaluation here that is worse than or better than tobacco. It’s simply saying this exists and we’re attempting to regulate it,” Pigman, R-Avon Park, said.

The Senate does not have a similar plan. When asked about the House measure Wednesday, Senate President Bill Galvano said he prefers his chamber’s approach to dealing with the vaping issue.

The number of high school students using vape products nationally increased 800 percent between 2011 and 2014, according to Rep. Toledo.

“My first impression of it (the House plan) is that it’s duplicative. I like the approach that the Senate has taken, better,” Galvano, R-Bradenton, said.

The Senate proposal, sponsored by Senate Judiciary Chairman David Simmons, R-Altamonte Springs, would bring Florida in line with the federal law by raising the age to 21 to purchase e-cigarettes or vape products.

The Senate measure (SB 810) would also raise from 18 to 21 the age to purchase any tobacco products, including chew and cigarettes.

Rep. Bob Rommel said lifting the cap in lawsuits involving e-cigarettes or vape products was problematic. Florida law does not exempt any other products from the $500,000 cap, he pointed out.

“Down the road, this will this lead to, if you eat too many Doritos and you get diabetes, will we increase the punitive damages for Doritos?” Rommel, R-Naples, said before voting to support the bill.

Rep. Javier Fernández, who cast the sole vote against the measure, said he wanted to raise to 21 the age to purchase vape products to conform with the federal law.

“I am concerned about a dual regulatory framework that, frankly, tries to distinguish between two products that, frankly, have the same negative impacts on youth and children. We would be well-served to bring it into the current framework,” Fernández, D-South Miami, said.