Florida House Republicans are trying to merge three state universities, and we're all wondering why

This time he filed an amendment that, if passed, would consolidate Florida Polytechnic University and New College of Florida with the University of Florida.

The Florida House of Representatives is currently on the 52nd day of its 2020 legislative session, a 60-day period were state representatives gather in the Capitol to review and make laws.

You may remember this from the time Fine, almost exactly a year ago, actually suggested that UCF should be shut down for five to 10 years, over the school's misappropriation of federal funding.

Fine later clarified he was jk.

His bill, HB 7087, proposed on February, is up for a House vote this Friday. Originally, the bill proposed a merger but, on Wednesday, Fine quietly filed an amendment which would make it "a full acquisition" instead.

Fine said this amendment would prevent UF from needing re-accreditation after the merger. His bill rests entirely on a staff analysis report that claims the stipulation will ultimately save the state millions of dollars to use for administrative funding.

The way it would work, according to the analysis, is by matching the state's cost per degree at Polytech and New College to UF's, which is much lower.

The analysis further indicates that Polytech's administrative costs are estimated at 23 percent, and New College's at 27 percent. Advocates say that if costs were reduced to 9.8 percent instead, it would leave a combined $12.5 million available for "instructional or other expenditures."

The bill, which has the support of House Republicans like Speaker José Oliva and Senate President Bill Galvano, would require the Board of Trustees of all three institutions to submit applications for the merger. Upon approval, both Polytech and New College would become part of UF.

Oliva admitted he hasn't even read the analysis.

If this has you scratching your head, you're not alone. Florida TaxWatch released a briefing urging the Legislature to "pump the brakes" on this bill, questioning the validity of the claims.

The briefing lists each colleges honors and accolades, before listing a whole bunch more math, making the case that the analysis excludes certain costs, programs and other operational needs that were not taken into account.

In the end, it argues that the bill would eventually "do more harm than good" and that "regardless of any demonstrated or perceived merit, the manner in which HB 7087 was introduced constitutes 'bad civics,'" as it "blindsided" the institutions involved in the merger.

Oh, yes ... The proposed merger was drafted and submitted without so much as the consent of Florida Polytechnic University, the New College of Florida or the University of Florida. The whole plan was never discussed or even brought up to any of the affected universities, and the briefing goes so far as to say that they were "kept in the dark." 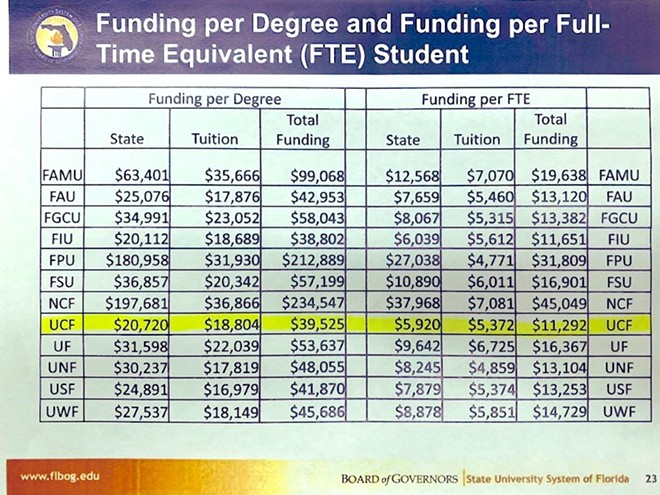 Smith said on Twitter that he doesn't want to see any universities consolidated, but he is questioning the integrity of the bill's intent to lower costs.

"That makes NO sense, and I call BS," Smith said.


Smith's amendment calls for Polytech and New College to merge into UCF instead.

He said that if they really wanted to save the state money, they would merge the two schools with UCF instead. UCF has a cost per degree of $20,720, considerably lower than UF's, and it's also geographically closer to both schools.

Smith posted on Twitter that the Higher Education Appropriations Subcommittee met for five months and never breathed a word about these plans to anyone.

"No one knows what’s going on," Smith said. "This bill is all chaos, so my amendment is just perfect."

Another Democrat challenging the bill is Rep. Margaret Good, who oversees the New College district. She is requesting that another study be conducted by January 2021 that would show the need for and potential impacts of such a merger.