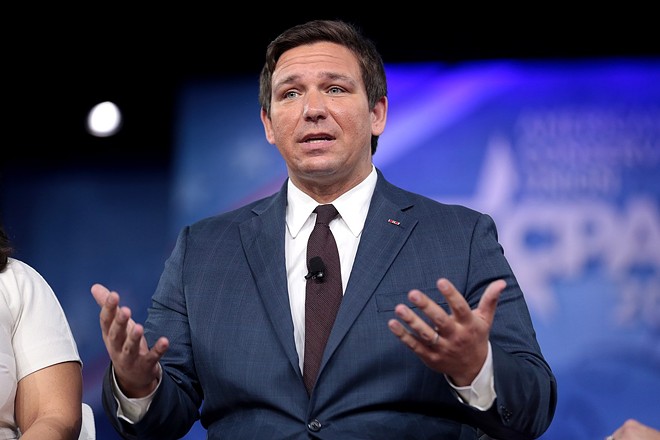 Photo by Gage Skidmore via Wikimedia Commons
Florida officials could soon finalize a deal to buy a business jet to fly Gov. Ron DeSantis, more than six months after he was a passenger in a state-operated aircraft that experienced a mechanical malfunction.

A negotiation team with the Florida Department of Law Enforcement on Tuesday recommended the state acquire a nine-passenger jet from Textron Aviation Inc. But the price tag on that plane was not immediately made public.

Members of the negotiating team did not discuss the plane’s cost during a public meeting at the state agency’s headquarters in Tallahassee. Agency spokeswoman Jessica Cary said she did not have a dollar amount when asked repeatedly after the meeting.

The airplane model state officials intend to buy is the Cessna Citation Latitude, which the company advertises on its website as having an “elegant and lean design” with an electronic door, touch-screen avionics, a large lavatory and a spacious cabin.

In a notice posted after the recommendation was made, the law-enforcement agency said it picked the Textron jet after determining it would provide “the best value to the state.” Lawmakers during this spring’s legislative session provided $3.8 million to the agency for a new aircraft, pilots and maintenance staff.

“The department reserves the right to hold additional negotiations with Textron Aviation Inc. in order to establish final contract terms and conditions,” the notice added.

When the state advertised to solicit proposals for the plane, it said vendors would need to provide the total bid price, which would include the cost to the state related to the “purchase and delivery of the aircraft, including but not limited to initial deposit, production, inspection(s), delivery costs, pilot training, broker fees and vendor legal fees.”

During the bidding process, an option to finance the plane was removed, Cary said. However, she said, “it is the intent of the state of Florida to secure a financing solution.”

In late June, four companies submitted bids to the state. However, the negotiation team said it was considering only two airplanes, the Citation Latitude model and a Legacy 450 from Embraer Executive Aircraft Inc. Negotiation panel members voted without explaining their positions.

Cary said the public notice on Tuesday starts a 72-hour period before a deal on the plane can be closed. Once an agreement is reached, it was not clear how soon the airplane would be made available to the governor.

The decision to buy a plane came after former Gov. Rick Scott, the wealthiest governor in state history and now a U.S. Senator, got rid of state planes and used his own private jet to travel the state.

That move left DeSantis flying in an aircraft the state bought from the federal government for $10,000 in 2016, according to records obtained by The News Service of Florida. Concerns about that plane arose after it experienced a mechanical malfunction, which required an emergency landing.

DeSantis, Attorney General Ashley Moody and DeSantis’ chief of staff, Shane Strum, were on board when the incident occurred, just days after the governor’s inauguration in January.