Florida GOP politicians still grappling with the wrath of Khan 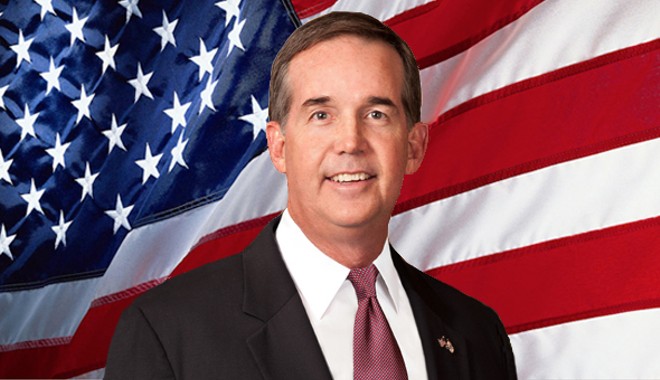 photo via Volusia County Republicans
Florida CFO Jeff Atwater says, "This is not exactly the superlatives-of-the-class character candidates."
By the time reporters asked him Tuesday about a new set of controversial comments by Republican presidential nominee Donald Trump, Florida Chief Financial Officer Jeff Atwater was familiar with the situation.

"We probably should just schedule the same conversation about every seven days, it appears," Atwater, who supports Trump, said regarding the nominee's comments about the parents of slain American soldier Humayun Khan. "Yes, I'm concerned."

What was already one of the most emotional moments of last week's Democratic National Convention – when Khizr Khan, the father of Humayun, blasted Trump for proposals to curtail Muslim immigration – took on a new dimension over the weekend when Trump continued the feud with the Khan family.

Trump noted to ABC's George Stephanopoulos that Ghazala Khan – the mother of Humayun, who died in Iraq in 2004 – was quiet, and that "maybe she wasn't allowed to have anything to say." Many interpreted that as a slap at the Khans' Muslim faith. Republicans in Florida and elsewhere largely scattered.

"Would I have ever said anything about his mother standing up there silent, not saying anything?" she continued. "Absolutely not. That's my position."

Pam Bondi told reporters "security reasons" kept her from saying whether she would appear at one of Trump's events Wednesday in Daytona Beach and Jacksonville. She spoke at both.

Atwater urged Trump to steer clear of the fight with the Khans and similar scraps that have become one of the unique aspects of the outsider businessman's presidential bid.

"I think if he would focus on public policy-making in his role as a [potential] commander-in-chief, and not about the quirks and the personalities, or the attire or the looks of somebody, I think he could be taken more seriously as a candidate," Atwater said.

Democrats used the comments to once again tee off on Trump, who visited Florida on Wednesday. In a conference call coordinated by the AFL-CIO, military veterans and union members blasted the remarks about the "Gold Star family" – a family that lost a member to war.

"When a father and mother have made the ultimate sacrifice for losing a son in the defense of his country, they have the right to say whatever they damn well please," said David Gates, a union member from Jacksonville who served in Korea and Vietnam.

Will Fischer, executive director of the AFL-CIO's Union Veterans Council, questioned why GOP politicians continue to back Trump even as they have to continually distance themselves from his statements.

"How much further does this man have to go, what else did he have to say, to lose your support?" said Fischer, who's based in Washington, D.C. "We're talking about, over the largest megaphone in this country, attacking Gold Star families – people who have already sacrificed so much, and more than many can even begin to comprehend."

For his part, Atwater said he believed a Trump presidency would produce better policies than an administration headed by former Secretary of State Hillary Clinton, the Democratic nominee.

"This is not exactly the superlatives-of-the-class character candidates," Atwater said.

Bondi told reporters Tuesday that she wouldn't talk politics at her post-Cabinet gaggle and said security reasons kept her from saying whether she would appear at one of Trump's events Wednesday in Daytona Beach and Jacksonville. She spoke at both.

TWEET OF THE WEEK: "Seen this movie before. My friends in Tallahassee all said I had to support @CharlieCrist for the GOP. He did lasting damage to the party." –State Rep. James Grant (@JamesGrantFL), on Wednesday, in an apparent reference to party unity arguments for Trump.