Fred and Jennifer Guttenberg seek to pursue a lawsuit against Smith & Wesson and Sunrise Tactical Supply.

A state appeals court Wednesday dealt a setback to the parents of a victim of the Parkland school shooting who have weighed filing a lawsuit against gun maker Smith & Wesson and a store that sold a semi-automatic rifle used in the 2018 attack.

A three-judge panel of the 4th District Court of Appeal upheld a circuit judge’s decision to dismiss an attempt to obtain what the court called an “advisory opinion” that could have helped Fred and Jennifer Guttenberg decide whether to pursue a lawsuit against Smith & Wesson and Sunrise Tactical Supply.

The Guttenbergs’ 14-year-old daughter, Jaime, was among 17 students and faculty members killed in the shooting at Parkland’s Marjory Stoneman Douglas High School. Former student Nikolas Cruz has been sentenced to life in prison in the shootings.

As a precursor to a potential lawsuit against Smith & Wesson and Sunrise Tactical Supply, the Guttenbergs sought a ruling about whether a state law shields gun makers and sellers from such lawsuits. That is particularly important, they have argued, because part of state law could force them to pay attorney fees and other costs if they pursue a lawsuit and ultimately find out that the gun businesses were shielded.

Broward County Circuit Judge Patti Englander Henning, however, dismissed the Guttenbergs’ request for such a ruling, known as a declaratory judgment. The appeals court agreed, saying that issuing what would amount to an advisory opinion “violates the requirement that a justiciable controversy exist.”

“There is a line between an acceptable claim for declaratory judgment and an unacceptable request for a court to provide an ‘advisory opinion,’” Judge Alan Forst wrote Wednesday in a 10-page decision joined by Judges Melanie May and Dorian Damoorgian. “That line is drawn without regard to the substantive merits of a potential cause of action. Here, the trial court concluded that appellants (the Guttenbergs) were requesting the latter.”

Also, part of state law says that if a court finds a defendant immune in such a lawsuit, “the court shall award the defendant all attorney’s fees, costs and compensation for loss of income, and expenses incurred as a result of such action.”

The Guttenbergs have sought to determine “the scope of the confusingly worded immunity provision” in the law, according to a brief filed by their attorney. The Guttenbergs interpreted the law as providing immunity to the gun businesses from lawsuits filed on behalf of cities, counties and other government agencies, rather than from lawsuits filed by individual plaintiffs.

If that interpretation is wrong, however, the Guttenbergs have contended they could face steep financial consequences for pursuing a lawsuit.

“No reasonable plaintiff would take that risk against a major company like Smith & Wesson, or even a smaller business like Sunrise Tactical Supply,” the brief said. “A declaration concerning the ambiguity in the statute is necessary before the tort claims can responsibly be asserted.”

But Smith & Weston attorneys argued that the circuit judge correctly concluded that the Guttenbergs wanted an improper advisory opinion. The gun maker’s attorneys said the immunity-related issues would need to be resolved in a full lawsuit that includes the Guttenbergs’ underlying allegations against the businesses.

“Plaintiffs’ declaratory-judgment action is a textbook request for an improper advisory opinion,” Smith & Wesson attorneys wrote in a brief. “The claims seek answers to hypothetical questions that may possibly arise only in the future. The trial court correctly recognized that plaintiffs are not entitled to a legal opinion preemptively depriving defendants of a potential affirmative defense before plaintiffs even file the claims to which the defense may or may not apply.”

A brief filed by the Guttenbergs’ attorney indicated they want to pursue a series of claims against the businesses, such as allegations of negligently “marketing military-style rifles to children and young adults in a manner that foreseeably led to the acquisition and misuse of such firearms by adolescents, including Nikolas Cruz, who are more likely to engage in risky and impulsive behavior.”

Florida Rep. Randy Fine tweets threatening message to President Biden after Tuesday’s school shooting in Texas: ‘Try to take our guns and you’ll learn why the 2nd Amendment was written in the first place’ 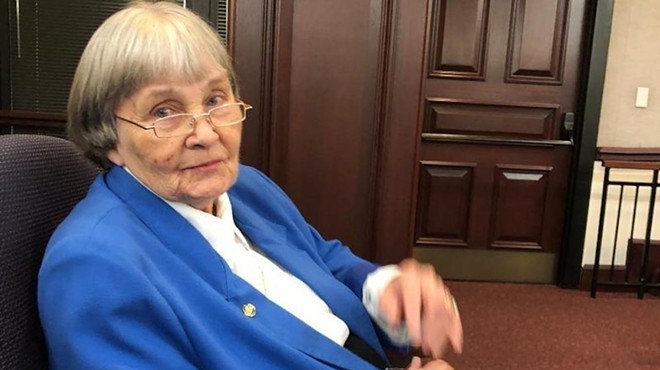