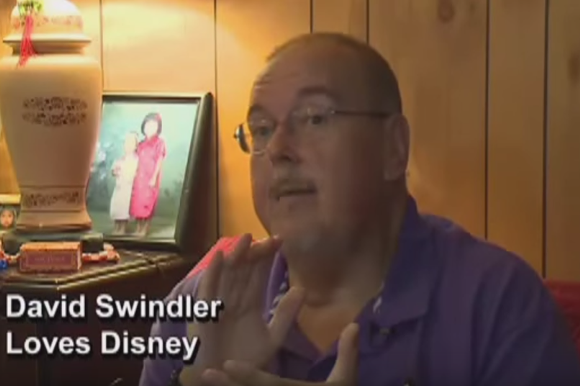 Photo via First Coast News
Over Labor Day weekend, David Swindler, a St. Augustine resident who loves Jesus, his family and Disney in that order, had his hotel room raided and was banned from Disney resorts for life because he made a bad joke about a meth lab.

According to First Coast News, while Swindler and his family were staying at the Pop Century resort, the vacationing dad grew impatient with a Disney cast member and joked that he could build a meth lab in his hotel room by the time he got some room service.

"My first and foremost love is Jesus Christ, then my family and then Disney," Swindler said to First Coast News, "I accept responsibility for saying that, don't know where it came from. Don't know why I said meth lab, I should have said, 'I was going to build an atomic bomb,' or something else. I didn't think anyone would take me seriously."'

Unfortunately for Swindler, his joke was taken literally and later that night his hotel room was raided by Disney security and Orange County Sheriff's deputies.

Even though authorities found zero traces of meth or meth-related equipment, his entire family was booted from the resort and now Swindler is banned for life.

Swindler has been told to file an appeal with Disney security, who has since issued him a trespassing warning for all properties, reports First Coast News.

"This has not taken away my love for Disney," said Swindler. "It was a figure of speech. I wish I could take it back."