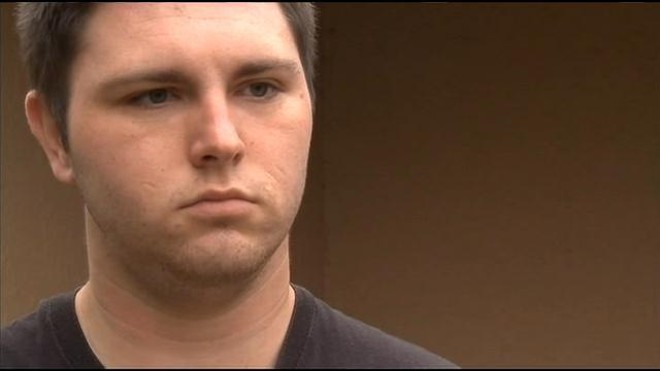 While waiting for a delicious calzone, 18-year-old Steven Conway of Eustis, Florida, found himself saving a woman's life after fighting off a sword-wielding attacker Sunday night.

According to Fox 35 Orlando, Conway and a friend entered a nearby Dollar General to grab a few sodas when they stumbled on the attacker, 26-year-old William Edward Cowan, in a fight with a store clerk. "I saw the woman, the man on top of the woman in front of the freezer sections, which are in the front of the store," he explained, "and I knew she had just, she just needed some help. So I pulled the guy off of her and thinking it was a fight at first," Conway told Fox 35.

The police affidavit states that Cowan, who has a tattooed face and dreadlocks, cut the clerk's face and stabbed her in the chest with a six-inch butterfly knife.

"When I pulled him off of her, he actually left the knife in her," said Conway.

Cowan immediately fled the scene but, because of his easily identifiable features, was picked up shortly after by police who then found out he was also packing two samurai swords.

According to Fox 35, the victim was airlifted to Orlando Regional Medical Center and "her injuries are not life-threatening."

Cowan is currently being held with $250,000 bond and is being charged with attempted murder.