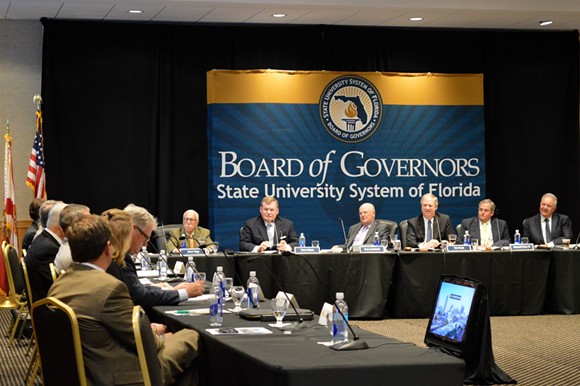 Photo by Monivette Cordeiro
Months of hard work and fundraising for the University of Central Florida’s downtown Orlando campus resulted in triumph Wednesday after the Florida Board of Governors approved the university's plans to a standing ovation.

“The Board of Governors and staff asked a lot of difficult questions, and it took us a year to get to where we are,” says board chair Tom Kuntz. “I’m pleased to be able to support this today.”

The state board, which governs Florida’s universities, gave its approval to the downtown campus plan contingent on UCF raising the rest of the $20 million it needs from community donors. So far, UCF has received $16 million from local private donors, the latest being Dr. Phillips Charities, which donated $3 million on Tuesday. UCF President John Hitt says there are several “irons in the fire” regarding possible additional funds.

“Today, UCF and our community asks you to support this transformative project,” Hitt says. “Today, we plant a seed in downtown Orlando that will benefit our students, community and state for decades to come.”

Orlando Mayor Buddy Dyer assures board members that the current residents and businesses of the historic African-American neighborhood of Parramore will not be displaced by the campus, but will in fact be helped by the additional education resources.

“The city has always envisioned Creative Village as being anchored by education, and of course that being UCF,” he says. “We believe this project will be transformational for the region and the city.”

Board member Norman Tripp says he was happy to see a presentation that addressed his concerns regarding the effect the campus would have on Parramore.

“So many times when minority communities are impacted by new things...a few years later we recognized the programs left them behind,” he says. “I want to make the record kind of clear that there is a long-term expectation that [Parramore] will benefit directly as well as the rest of the community from this opportunity. Whenever changes are being made, when you’re talking about what’s necessary in the education part of this project, that you remember first and foremost, we’re trying to lift a whole community as well as others who migrate from the outside.”

Dean Colson, one of two board members who voted against the project, says Florida should be skeptical of new “brick and mortar campuses” when there is the popular option of online programs, and despite the intense pressure on the board, “there comes a time we can’t afford every legacy project of our elected officials.”

“By placing this facility downtown in an area that has become incredibly exciting thanks to the great leadership of Mayor Dyer...we have the opportunity to retain that (student) talent,” she says. “Our region is working hard to diversify our economy, and keeping that talent by giving them the opportunity to fall in love with Orlando is just good economics.”