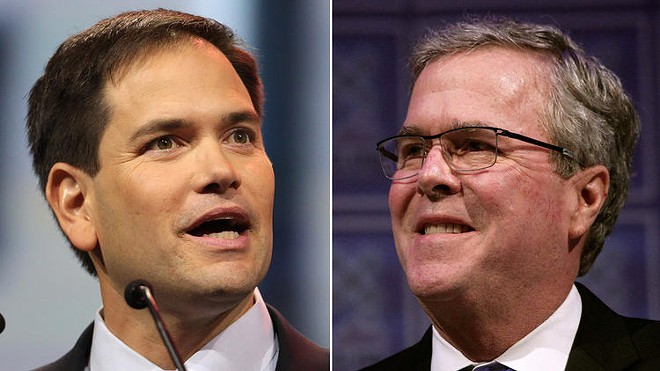 Photo via Sun Sentinel
Silver Airways is still holding out some hope Gov. Jeb Bush and U.S. Sen. Marco Rubio won't get crushed in the Iowa caucuses by presidential candidate Donald Trump on Feb. 1. The Fort Lauderdale airline is offering free flights in Florida if Bush or Rubio win the caucuses, according to a press release.

"You may think there’s only a snowball’s chance but if one of our Florida candidates – Marco or Jeb – pull off the win in the Iowa Caucus and don’t get ‘Trumped’, you’ll receive a free flight* between any of Silver Airways’ 10 Florida destinations," the company says. "Simply visit the Silver Airways ‘Triumph or Trump’ Sale at silverairways.com to vote for your Presidential candidate, register, and then sit back and relax until the February 1st Iowa Caucus results."

There are some terms, though. You have to register your email before Iowa's decision here. Obviously, if Jeb! or his ex-protégé don't win, we get diddly-squat. The ticket would be for a one-way, non-stop flight within Florida, and you have to use it between Feb. 9 and May. 24, according to the release.

The offer would be more exciting if Trump wasn't polling at 41 percent among Republican voters three days ago, according to CNN. Better luck next time, Jebio.