Even though vaping is totally awesome, it is extremely dangerous and could kill you 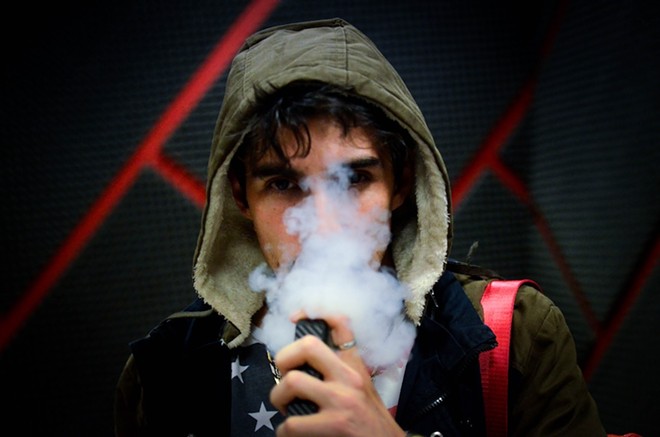 It’s an acronym for what health officials are calling “vaping associated pulmonary injury.”

It has potentially affected 450 people in 33 states, including Florida, and caused five deaths as of Friday, according to the federal Centers for Disease Control and Prevention.

The Bureau of Tobacco Free Florida told The News Service of Florida on Monday that state health officials have “received several potential reports of illness” and that the Department of Health and the Florida Poison Information Center Network are working with the Centers for Disease Control and Prevention on investigating a multistate outbreak of severe pulmonary disease.

The Department of Health declined to give the precise number of reported cases or disclose where the residents live.

“The consequence of that inaction has led to potential product manipulation and permitted tobacco companies to lure a new generation with (electronic cigarette) advertising and flavors directed at youth,” Jordan said in a statement to the News Service.  “It’s past time for the FDA to do its job and subject these products to a review in order to better understand their potential health impact.”


E-cigarette companies claim that their products are intended for adults, but skyrocketing rates among youth tell a different story. Learn more at https://t.co/tAnoeFiL2Z #eEPIDEMIC pic.twitter.com/1oeEgpBVZj

While manufacturing companies have said the devices and products are aimed at adults, data show that large numbers of youths are vaping. The Bureau of Tobacco Free Florida, which is part of the Department of Health, reported that in 2018, about 25 percent of Florida high school students reported they used vaping devices. That’s a 58 percent increase compared to the previous year.

Florida’s experience is mirrored in other parts of the nation. A 2016 U.S Surgeon General report showed that e-cigarette use among high school students grew 900 percent between 2011 and 2015.

To date, the Centers for Disease Control and Prevention investigation has not uncovered evidence that vaping-related illnesses are infectious. Symptoms include coughing, shortness of breath, chest pain, nausea, vomiting, diarrhea, fatigue, feve, and weight loss.

Patients have reported histories of e-cigarette use, which has led health officials to suspect the illnesses are being caused by a chemical exposure. On Friday, the CDC asked that consumers consider not using e-cigarette products during the investigation.

Thomas Berlin, director of pulmonology respiratory care at AdventHealth in Orlando and president of the Florida Society of Respiratory Care, told the News Service that the hospital in downtown Orlando has treated one patient who came to the facility with such a pulmonary illness.

The patient, Berlin said, was “critically ill,” not able to inhale enough oxygen and required the assistance of a breathing machine.

Though he was aware of one patient who’s been treated, Berlin pointed to the national data and said the issue is a widespread problem.

“This is an epidemic,” said Berlin, who has been a practicing respiratory therapist in Orlando for 35 years. “This is new. It’s not an increase in previously seen cases.”

Berlin isn’t alone in his use of the word “epidemic.”

American Medical Association President Patrice Harris issued a statement saying the “illnesses currently sweeping across the country reaffirm our belief that the use of e-cigarettes and vaping is an urgent public health epidemic that must be addressed.”

Meanwhile, the Food and Drug Administration on Monday sent a warning letter to Juul, the largest distributors of electronic cigarettes in the United States, accusing it of illegally touting nicotine pads used in e-cigarettes as less harmful than cigarettes.

The company, owned in part by Marlboro cigarette maker Altria, accounted for 76 percent of the electronic cigarette market in 2018.