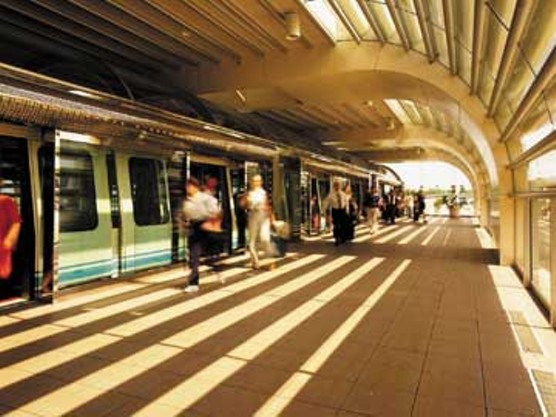 Editor's note: The original version of this piece included some unclear language that led people to believe the writer was making light of the fact that somebody died on this train. The writer was attempting to describe to people his feelings that the monorail at the airport felt unsafe and rickety to him, like a monorail from a cartoon. Since the intent was not to upset the family of the person who was killed in the accident (who was not named by authorities when the blog was written), we have removed the introduction to the post. We apologize for any pain we may have unintentionally caused the friends and family of the deceased.


IMMEDIATE: For Release May 8, 2015
TRAM INCIDENT UPDATE
INCIDENT: At approximately 5:48 this morning there was an incident on one of the automated people mover trams that connects the main terminal building at Orlando International Airport to airside 1.
Bombardier, which operates and maintains the train system, had an employee on the tram at the time. The tram, which is normally automated, was being operated manually during a routine inspection. The Bombardier employee along with a passenger were on the tram when it suddenly made an emergency stop. The passenger was ejected through the windshield of the tram falling from the elevated guide way.
Orlando International Airport Rescue Fire Fighters (ARFF) responded to the call and performed advanced life support services on the patient. The patient was transported to Florida Hospital East and were later pronounced deceased.
IMPACT ON AIRPORT OPERATIONS:
Operations at Orlando International Airport have been minimally impacted. The tram involved is out of service. However, there is a redundant train service to each airside so passenger service to the gates has not been interrupted.
ONGOING:
An evaluation of the incident is underway.
BASIC TRAM INFORMATION:
There are 8 trams at Orlando International with three cars each. The average roundtrip time per tram is 3 minutes.
The distance for each tram to the airsides is less than 2000 feet. Each train carries approximately 100,000 passengers per day.