Either Amy Coney Barrett understands why Trump picked her, or she doesn't – which is worse? 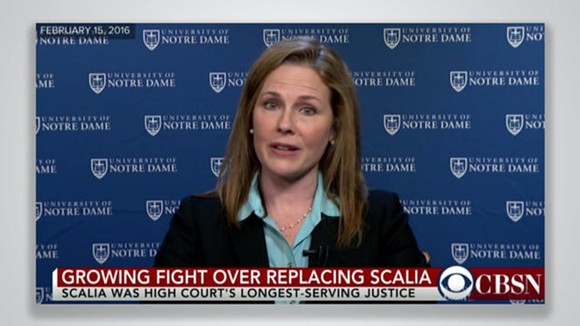 In 2016, Notre Dame law professor Amy Coney Barrett opined that it would be inappropriate for Merrick Garland to replace her mentor, Antonin Scalia, on the Supreme Court during an election year because doing so would “dramatically flip the balance of power.”

Trump #SCOTUS front-runner Amy Coney Barrett, when asked whether Obama should be able to appoint a Supreme Court justice in an election year, said it's inappropriate when it would “dramatically flip the balance of power." pic.twitter.com/loLMaLrsUm

On Saturday, the same Amy Coney Barrett accepted Donald Trump’s nomination to replace Ruth Bader Ginsburg on the Court. Her Senate confirmation, which seems all but certain, will not only alter the balance of power days before a presidential election. It will cement right-wing control of the judiciary for a generation.

With Barrett on the bench, Republicans believe they’ll have the votes to overturn Roe v. Wade, roll back environmental regulations, and block labor protections. If they can confirm her by November 10, she’ll hear arguments in a case that could overturn the Affordable Care Act. While nearly every reputable legal scholar has dismissed the underlying theory as preposterous, Barrett has made clear she’s no friend of the ACA, and she’s not that worried about precedent. As she wrote in a law review article (emphasis mine): “The Supreme Court’s constitutional mistakes are extremely difficult to correct; one can hope only for a change of heart, a change of personnel, or a change by constitutional amendment.”

For Trump, seating Barrett quickly is about something more important than undoing the ACA: him. He needs a ninth justice in place because – well, I’ll let him tell you: “I think this [election] will end up in the Supreme Court, and I think it’s very important that we have nine justices.”

His allies have been even more explicit. Senator Ted Cruz: “One of the biggest reason [sic] we will confirm the nominee BEFORE Election Day is to ensure a full 9-Justice majority to resolve any (inevitable) election disputes.” Senator Lindsey Graham: “A 4–4 Supreme Court is not a good deal for America. Now, we may have litigation about who won the election, but the court will decide.”

Astonishingly dumb idea. One of the biggest reason we will confirm the nominee BEFORE Election Day is to ensure a full 9-Justice majority to resolve any (inevitable) election disputes.

Never mind that having eight justices didn’t bother them in 2016. The important thing is that they’re talking about the Court deciding elections like it’s normal – something to expect rather than something that’s happened once in 58 presidential elections.

The math is simple: According to this weekend’s Washington Post/ABC News poll showed Joe Biden is winning voters who plan to vote early or absentee by 36 points, while Trump is up among Election Day voters by 19. So Trump has spent months raising doubts about mail-in voting. He’s amassed thousands of lawyers to contest absentee ballots in swing states where Trump is behind, while Republican apparatchiks lay the groundwork to turn an election Trump is likely to lose into a legal contest he can game.

Last week, the Department of Justice announced an active investigation – something it never does – into nine discarded military ballots in Pennsylvania, highlighting the fact that some contained Trump votes, thus fueling the president’s conspiracies. It turned out to be a temporary contractor’s administrative error. Meanwhile, Pennsylvania Republicans have refused to address the issue of so-called naked ballots, which election officials fear could disenfranchise 100,000 absentee voters on a technicality. At the same time, they’ve asked the Supreme Court to overrule the Pennsylvania Supreme Court’s decision to extend the state deadline for absentee ballots.

In Barrett, Trump found a justice he thinks will get in on the fix. Either she understands that, or she doesn’t. I’m not sure which is worse.

The Trump campaign previously challenged Nevada’s move to expand voting by mail. It lost, but Attorney General Bill Barr then claimed in an interview that Nevada’s change would lead to fraud: “Someone will say the President just won Nevada. ‘Oh, wait a minute! We just discovered 100,000 ballots! Every vote will be counted!’ Yeah, but we don’t know where these freaking votes came from.”

In Ohio, a judge ruled that the Republican secretary of state’s directive to allow each county only one absentee ballot drop box was unreasonable; the secretary of state plans to appeal. The Trump-aligned Honest Elections Project is suing to block absentee ballots that arrive soon after the election but lack postmarks from being counted in Minnesota.

Florida, which slapped an impossibly confusing poll tax on hundreds of thousands of ex-felons who were given the right to vote by a constitutional amendment, now wants the FBI to investigate Michael Bloomberg for paying $16 million toward 32,000 ex-felons’ fines and fees, almost as if restitution was never really the point.

BREAKING: Florida AG just sent this letter to the FBI and Florida Department of Law Enforcement asking them to look into "potential violations of election law."

Bloomberg's effort to pay off fines and fees of people w/ felony convictions is the target. pic.twitter.com/CT2pUhLPFu

Then there’s North Carolina, where the Trump campaign and state Republican leaders have sued to block changes that make it easier for absentee voters to correct ballot deficiencies – in other words, to have their votes counted. The lawsuit came after the two Republican members of the State Board of Elections resigned “in protest” of an agreement with voting rights advocates that they’d agreed to, then said they were misled about. (The meeting minutes showed they weren’t.)

The goal isn’t to win outright so much as muddy the waters. As one of Trump’s legal advisers told The Atlantic, “There will be a count on Election Night, that count will shift over time, and the results when the final count is given will be challenged as being inaccurate, fraudulent – pick your word.”

As Trump put it last week when he refused to promise a peaceful transfer of power, “Get rid of the ballots and you’ll have a very peaceful – there won’t be a transfer, frankly. There will be a continuation.”

The plan is to delegitimize vote counts, challenge ballots, and clog the courts with lawsuits. Sow enough chaos, and Republican legislatures might bypass voters and directly appoint electors to the Electoral College. As The Atlantic story makes clear, the Trump campaign is eyeing the possibility.

This much is unambiguous: Short of a blowout, the election is headed to court, which means the Supreme Court will have the final word. So is this: In Barrett, Trump found a justice he thinks will get in on the fix.

Either she understands that, or she doesn’t.

I’m not sure which is worse.