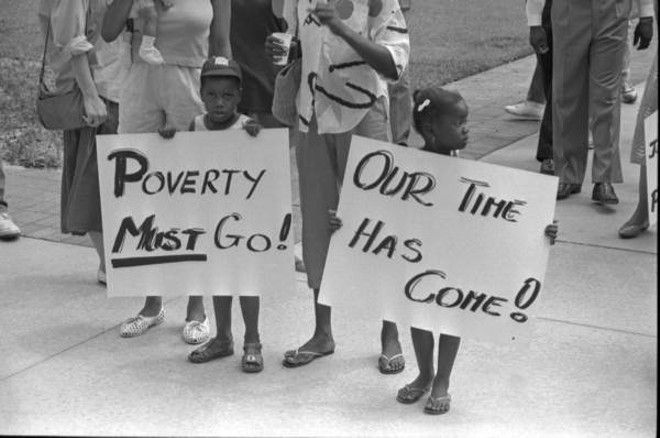 Photo by Deborah Thomas via Florida State Archive
Two children protest poverty in Tallahassee in 1987.
While some people may be traveling to the beach or out buying a cheaper mattress on Monday, a group of organizers will be protesting local poverty in downtown this Labor Day.

Although Orlando is the glittery center of tourism in the country and arguably, the world, it also has the lowest median pay among the top 50 American metropolitan areas, according to 2014 data from the U.S. Labor Department data. Earlier this year, the United Way reported that “nearly half of all households in Orange, Osceola and Seminole counties struggle to cover the basics of food, shelter, medical care and transportation,” the Orlando Sentinel reports. The same study found a little over 200,000 homes in Central Florida where workers earned over the federal poverty limit, but were one paycheck or crisis away from losing their home or being bankrupt.

Gray says the center is chronically always full as more and more impoverished people in the area come for help. But it came to a tipping point recently for Gray when he helped a mother and her small child load their groceries into a small car. Inside the car’s trunk, Gray saw two sleeping bags, a pile of toys and household items. The woman was embarrassed because she did not want him to know they were living out of their car.

“That was it for me,” he says. “I got together with two of my friends and we decided we needed to do something beyond the walls of our organizations. We need to dramatize this issue to move the needle on the situation. We may not be successful, but I’m tired of not trying.”

The protest is scheduled from 9 a.m. to 11 a.m., and starts at Wall Street Cantina. The group will march from the Orlando Sentinel to Orlando City Hall and back. Some protesters will be blindfolded to represent the city “being blind to the reality that we are the lowest wage economy in the country with the highest homeless population,” the group’s Facebook event page says.

Gray says this is his first foray into activism and has little protest experience, but the group will learn as they do more demonstrations.

“It could be 20 people that show up or 2,000,” he says. “No matter how many people are there, we’re enough. We have an obligation to do something about this.”