Do, me Orlando: Swimming with manatees at Plantation on Crystal River, Florida 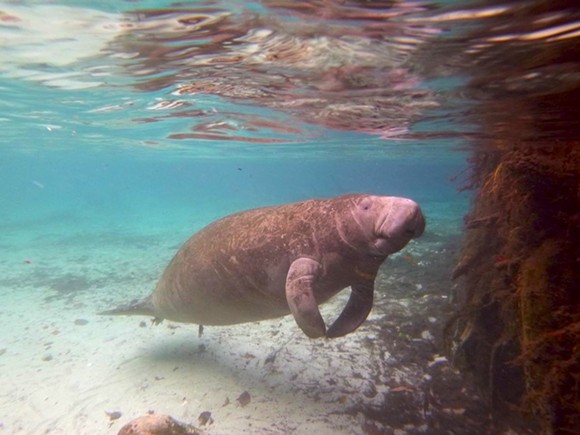 Orlando Weekly got an email a few months ago inviting someone from our Editorial team to come spend some time out at Crystal River’s newly renovated resort, Plantation on Crystal River. Oddly enough not many of us were chomping at the bit to drive out to the coast and take on a larger assignment right before our onslaught of holiday issues and vacation-induced short deadlines. Yet, when I saw the words “swim with manatees” I have to admit, I may have laughed girlishly and covered my face.


I’d heard of Crystal River before since a few of my friends had been there before to do some drunken scalloping. I’d lumped it in with the pile of uber-Floridian towns out to the West like Homosassa that made me giggle and hadn't really thought of it since. So I signed up.The hotel, totally looks like a plantation would. Big white columns jutting up in the front of the building and squarish-colonial windows. The place was decked out for the holidays Vegas-style with tons of holiday lights and poinsettias everywhere. I was gay-
geeking out just looking at it. Fabulous! Photo by Brendan O'Connor
The Plantation on Crystal River

After a quick meal of smoked salmon and locally brewed beer (holler at Crystal River’s Copp Winery) we made a quick b-line to bed so we could wake up in time for our 7:15 a.m. snorkeling date. Photo by Brendan O'Connor
Delicious dinner at the Plantation

Captain Ed, formerly of the U.S. Coast Guard, was our chaperone for the day. He taught us all about King’s Bay and “passive observation” which was the buzzword of the park. Crystal River is one of the best places in the country to see the Florida manatee because unlike everywhere else in the state, it’s legal to not only swim with this protected species but you can actually reach out and touch them. The Federal Government makes the tour companies teach tourists all about “passive observation,” which is kind of like going to Mall at Millenia to do some people-watching - you just sit back and let the manatees (Brazilian tourists) do what they’re doing. If they bump into you, as they most likely will (Brazilian tourists), it’s totally their fault and not yours. In reality manatees are kind of like cats, in that they will approach you on their own if you are calm and not too aggressive or noisy. I have to say, I thought I would be a touch more graceful than I was when hitting the water, but I was a bit of a mess.

The wetsuit made my breathing really labored as it constricted my diaphragm and my mask was leaking because I hadn't shaved - not to self: shave my goddamned face next time I snorkel. So when I spotted my first momma-tee and her baby my first reaction was to choke on some water and flail my arms around like some drowning spazz. There were fish everywhere. Of all sizes. Captain Ed had rhymed off a few but the only one I could remember was “Mangrove Snapper,” which will be the name of a beach-town strip joint I open when I’m a retired old queen.

Art by Brendan O'Connor
The only fish name I could remember was "Mangrove Snapper" and I kept giggling into my snorkel. I'm sure everyone thought I was choking.
It took one overly-friendly encounter with Barnacle Betty to make me feel more comfortable with the whole thing. A passing Fish and Wildlife volunteer on a kayak told us that she’d just come into the Bay after a year at sea where she got all encrusted with barnacles from living the Salt Life. Now that she was back home for the holidays the barnies would fall off eventually but she liked to rub up against snorkelers to knock them off and expedite the process. She felt like a wet, magical basketball and I fell in love with her crusty ass.

Art by Brendan O'Connor
Barnacle Betty was such a ham. She was begging for attention. We assumed it was because we smelled nice or something but it was totally because she wanted to use us to knock the barnacles off of her back. She had an itch that we could scratch.
We made three stops; the first one they called the “Key Hole” which was basically a cul-de-sac that intruded into a manatee sanctuary (sanctuaries are just like the church in Hunchback of Notre Dame, it’s a no-go zone and you can’t bug the critters that are hanging out past the buoys) in the main channel, the second was in a residential canal where we saw about 12 manatees “logging” together (that means sleeping on and under the surface of the water … like logs) and the third was at Three Sisters Spring, which is one of the headwaters of the Crystal River proper. 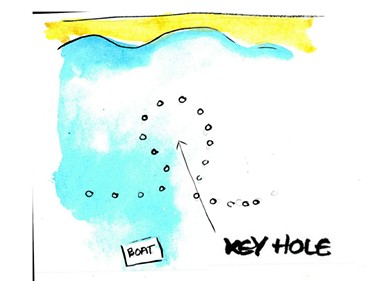 Art by Brendan O'Connor
The Keyhole! This was our first stop on the trip. Everything behind the buoys was off limits but the Fish and Wildlife people had created this handy little viewing-polyp that we could hang out in and watch the manatees swim by.
The day lasted about four hours in total and ended with a hot cocoa and a manatee-stoked pontoon ride back to the hotel. The whole thing was a highlight of my nine years of Orlando living. I’d actually like to go out on record and say you really shouldn't be able to call yourself a Floridian until you've been blessed to take a little dip with this beautiful, endangered species, that I used to think of as just fat dolphins. 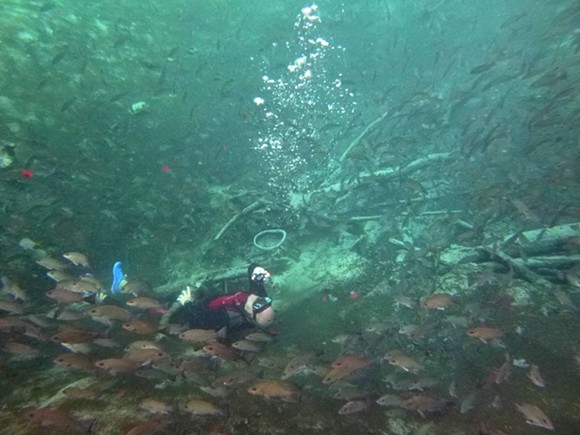