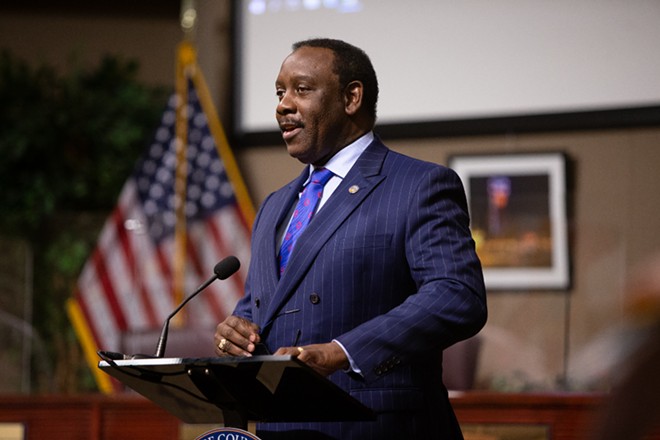 Photo via Twitter/Jerry Demings
Orange County Mayor Jerry Demings that the county's budget would be thrown into disarray if Disney's special district is dissolved.

The Orange County mayor said that dissolving Disney's special district would be catastrophic to the county's budget at an economic summit Thursday.

Mayor Jerry Demings does not believe members of the Florida Legislature have thought about the consequences. He shared his concerns while speaking to a crowd at  Full Sail University.

“I believe they have not adequately contemplated the ramifications of what they have proposed at this point," he said. “It’s obvious this is political retribution that is at play here.”

The Florida Senate passed a bill on Wednesday that would dissolve a 55-year-old Disney government structure: the Reedy Creek Improvement District. The district in Lake Buena Vista provides water, sewer, electric power, fire protection and public safety and also oversees land use. It is entirely overseen by Disney and functions as a sort of private government for the theme parks.

This escalates the feud between the Legislature and the entertainment company after the latter showed opposition toward the "Don't Say Gay" law. This law prohibits discussions of gender identity and sexual orientation in kindergarten through third grade classrooms, effective July 1.

Demings said that he and his staff are sorting through this issue in anticipation of lawmakers passing the decision.

"If we had to take over the first response and public safety components for Reedy Creek with no new revenue, that would be catastrophic for our budget in Orange County," Demings said. "It would put an undue burden on the rest of the taxpayers in Orange County, to fill that gap." 
Orange County tax collector Scott Randolph told News 6 that if the district goes away, the county will potentially take on $1 billion to $2 billion in bond debt, which has to come from somewhere.