Dirty cops and Nunes memo madness: The right attacks the FBI as the left valorizes it 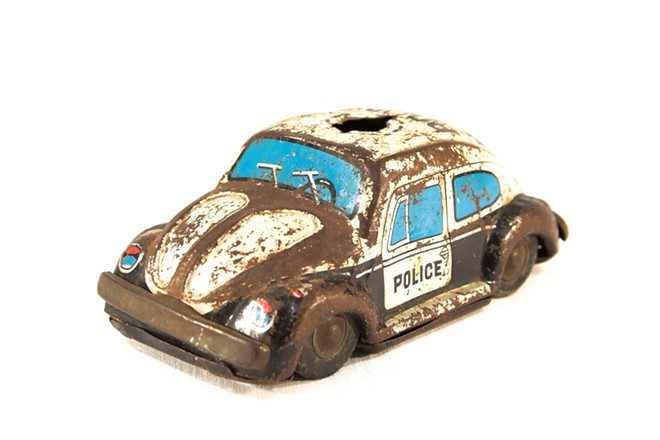 Last week, I got a text from my mom flipping out about The Memo. She's smart but not especially political, and her text made it clear that the #releasethememo movement that began as an alt-right rallying cry had now reached the mainstream. “As a teenager you ranted about the CIA (you were right),” she wrote. “Now the FBI. Can we trust any politician or any government office?”

It was a strange moment for me, because, at the same time every mainstream news network in the country was on “Memo Watch,” I was covering a woefully un-covered trial in Baltimore, where the FBI revealed a vast police corruption conspiracy after they traced some opioids that killed a young woman back to a drug gang and, upon tapping their phones, realized they were working with a Baltimore Police officer named Momodu Gondo. When they tapped his phone, they realized that he and other officers were regularly targeting citizens whom they thought had a lot of cash – to rob.

Over the last three weeks of a federal trial – six of the officers pleaded guilty, while two maintained innocence and stood trial – we have learned that, according to testimony, one officer executed a man point-blank in 2009 because he “didn’t feel like chasing him.” According to Gondo’s testimony, a deputy commissioner came out to the scene to coach everyone on what to say: The victim was about to run them over and he had to shoot. The deputy commissioner announced retirement immediately following the testimony.

We also learned that during the uprising following Freddie Gray’s death, officer Wayne Jenkins, the ringleader of the elite task force that was indicted, came to a bail bondsman with two big trash bags of pharmaceuticals stolen from pharmacies and told him to sell them.

The bail bondsman testified that Jenkins came to him with stolen drugs almost every night. Jenkins, who did not testify, has come across as something like a demon. Even officer Jemell Rayam, who shot the man to keep from chasing him, thought Jenkins was excessive. Most of the officers said they were scared of him. He is, in Trump’s language, “high-energy,” and is in many ways the perfect image of Trumpian law enforcement: If people are poor, or black, or immigrants – unprotected – then they are inherently criminal and nothing you can do to them is criminal.

The Trumpist attempt to undermine the FBI is part of what Steve Bannon called the “deconstruction of the administrative state” – an attempt to place lawmen (in whom the president sees himself) above the law.

Jenkins had been involved in this kind of activity since at least 2010, when he and Det. Sean Suiter – who was murdered in November, the day before he was supposed to testify to the grand jury in the case – chased a “target,” causing a fatal car crash, and then planted drugs in the car. And Jenkins, as many people testified, was protected by the local power structure.

But the plodding investigations by the FBI – and prosecutions of the U.S. Attorneys – brought down Jenkins’ long reign of terror.

This is similar to the story told by David Grann in last year’s Killers of the Flower Moon, which is about how the newly formed FBI was able to break through the white-power structure of 1920s Oklahoma law enforcement and expose local authorities' involvement in killing hundreds of Native Americans in order to steal their payments from oil on Osage-owned lands.

And yet, the national media – which covered every second of the burning CVS – was largely silent about the vast police misconduct revealed in the trial, even though they dovetailed in some uncomfortable ways with the Memo Watch hysteria.

The Memo, authored by Devin Nunes, who worked on Trump’s transition team and had a weird midnight Uber ride and secret White House lawn meeting a few months back, ultimately alleged that the Steele Dossier – source of the “pee tape” – was paid for by the DNC and used to get a FISA warrant on former Trump adviser Carter Page.

The Trump team has long alleged that Page, who has done some bragging about his Russian connections, was nothing more than a “coffee boy” – but now this was an attempt by the FBI to take Trump down.

Ultimately, The Memo was a dud – the Democrats are trying to get the president to allow the release of their counter-memo – but it does highlight the weird moment where the right is attacking law enforcement agencies and the left is valorizing them. It’s not hard to find countless examples of FBI malfeasance – the agency’s CoIntelPro is one of the worst incidents of law enforcement over-stepping in American history, as Hoover and his team plotted illegal Jenkins-esque ways to destroy the Black militant movement.

Likewise, the rather young and dashing dynamic duo of federal prosecutors in Baltimore – Leo Wise and Derek Hines – come across as champions of Baltimore’s most vulnerable citizens. But as they pulled out a big bag of black masks and clothes that Jenkins used for burglaries, I couldn’t help but think of their colleague Jennifer Kerkhoff, who, an hour down the road in Washington, D.C., is still trying to prosecute 59 people for wearing black clothes during Trump’s inauguration, following a protest where a few windows were broken.

But the Trumpist attempt to undermine the FBI can still be seen as an attempt to protect people like Wayne Jenkins – local law enforcement officers like the super-racist former Arizona sheriff Joe Arpaio, whom Trump pardoned – and give “local control” or “states’ rights.” It is part of what Steve Bannon called the “deconstruction of the administrative state.” An attempt to have lawmen – lawmen in whom the president sees himself – stand above the law.

Just as testimony in the Baltimore trial wrapped up, it came out that the Trump team was trying to plan a big military parade on Pennsylvania Avenue in Washington. Surely, that will elicit massive protests – and may be the best gift to the lagging and fractured protest movement – but I couldn’t help but imagine Wayne Jenkins with his grappling hooks and stolen drugs riding with Arpaio at the front of the whole thing as a perfect picture of Trumpian law enforcement.

But he better not wear his black burglary clothes – D.C. prosecutors might mistake him for an anarchist and charge him with another conspiracy.

Baynard Woods is a reporter for the Real News Network. Send tips to [email protected]; @baynardwoods on Twitter