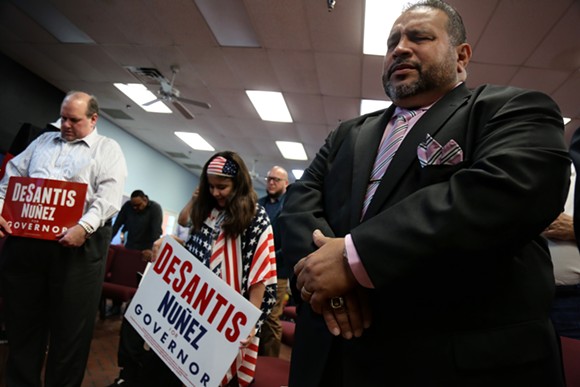 Photo by Joey Roulette
Election day is right around the corner, and with several months of campaigning behind him, Ron DeSantis has yet to unveil his healthcare platform.

The Republican gubernatorial nominee, who prevailed in a one-on-one primary under the aegis of President Trump's heavy endorsement, stopped at the Iglesia Nación de Fe in the heart of Kissimmee's motel strip on Saturday afternoon to entertain a small crowd of Hispanic church-goers. Many anticipated updates on the status of his healthcare platform.

But instead he delivered a 15-minute speech on his law school upbringing, laid out plans to expand a school voucher system in Florida and reasserted his firm support for the U.S. constitution — among other conservative topics on law enforcement and cutting taxes — before darting off to a closed-door GOP dinner at Disney's Grand Floridian.

"Our healthcare platform will be rolling out in, I would say, the next few days," State Rep. Jeanette Nuñez, who DeSantis chose as his running mate last month, told reporters at the end of Saturday's gaggle.

Nuñez's hint of a healthcare platform echoed what DeSantis was quoted as saying last week on an impending transportation agenda. "We'll be rolling out a transportation policy soon," the nominee said.

The ticket's definition of "soon" and "the next few days" is oddly vague, and marks a trend of instability for the Republican campaign as DeSantis lags behind his firebrand contenders Andrew Gillum and running mate Chris King.

A late-September Quinnipiac poll of 888 likely Floridan voters showed Gillum beating DeSantis outside of the margin of error for the first time with a 9-point lead. A Sept. 20 NBC News/Marist poll of 600 likely voters indicated a 5-point lead for Gillum.

The Democratic nominee has laid out his support for Medicare for All and vowed to bolster state-wide public transportation, which includes the high-speed rail plans between Tampa and Orlando that Governor Rick Scott axed in 2011.

Photo by Joey Roulette
State Rep. Jeanette Nuñez speaks with reporters after a Ron DeSantis rally on Saturday.
The DeSantis team is nonetheless armed and ready to hash out scathing political attacks on any issue, including healthcare. Nuñez walloped Gillum's running mate Chris King for criticizing DeSantis' comments to CNN on the issue.

Just before the rally, King held a street-side protest outside of the church, where he took aim at comments DeSantis made in 2017 that inferred cancer patients can seek treatment by going to the emergency room.

"There really is no lack of healthcare," DeSantis told CNN's Erin Burnett, responding to a question on his opposition to Medicaid expansion under Obamacare. "If people really need it, they show up to the emergency room, they do get care, it just gets passed on."

And then there's State Rep. Amy Mercado, who joined King at the rally protest to slam the campaign's silence on what she said is one of the most important issues for Florida.

"This is a healthcare state," Mercado exclaimed, "and he has zero plans for healthcare."

"He blames everybody else for it but it's his vote that's gutting it, so he wants to be governor for us here to do the same thing," she said. "So you're allowing people to die, because you don't have the strength and the goal of actually protecting them."

The glaring, politically dangerous absence of an official healthcare position comes amid changes in the campaign's leadership. Last week DeSantis announced that Susie Wiles, a GOP strategist who led Trump's successful Florida campaign, would take over as campaign chair.

Shortly after Saturday's awkward event, the internet taunted DeSantis for his rally's low turnout, serving as yet another emblem of a Republican campaign in survival mode as its Democratic contender barnstorms traditionally Republican regions.

The DeSantis event in Kissimmee starting a bit late. "The congressman will be here in a few seconds" pic.twitter.com/LR66G7iTUF