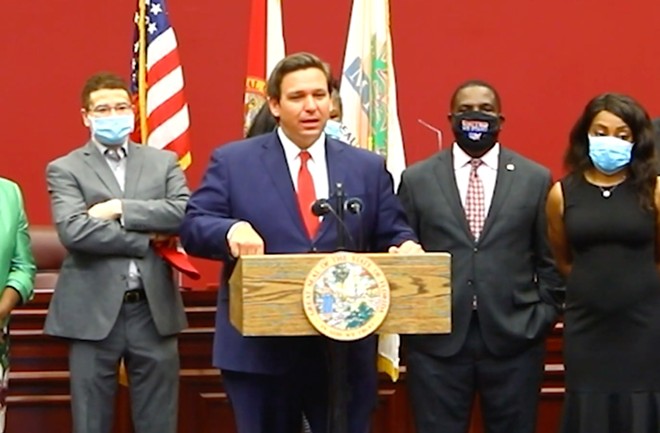 Screenshot via Florida Channel
Gov. Ron DeSantis on Wednesday doubled down on his selection of Palm Beach County Circuit Judge Renatha Francis to serve on the Florida Supreme Court, intensifying political pressure in support of Francis as a controversy over her qualifications continues to swell.

In an unusual move, the Republican governor held a news conference in Miramar, where he was flanked by Black elected officials and Francis, who would become the first Jamaican-American justice and the only woman and Black justice on the seven-member court.

“And yet, rather than celebrate this great achievement, we’re now facing a politically motivated lawsuit attempting to prevent Judge Francis from assuming office in just the next two weeks,” DeSantis told reporters.

State Rep. Geraldine Thompson, D-Windermere, filed a lawsuit in July challenging Francis’ appointment, alleging that she is ineligible to serve as a justice because she did not meet a legal requirement of being a member of The Florida Bar for 10 years.

Amid the governor’s accusations of political maneuvering, Thompson called DeSantis’ appointment of Francis and supporters’ defense of his selection “the worst form of racial tokenism.”

The Florida Supreme Court last month agreed that DeSantis “did exceed his authority” with Francis’ selection but refused to grant Thompson’s proposed remedy of forcing the governor to choose a justice from a new list of nominees. Instead, it said the proper fix would be to require DeSantis to appoint another nominee from a short list of candidates he received early this year.

"The problem I have in this case is this particular representative is somebody who’s been very vocal about wanting to have a Black justice on the Supreme Court."

Over DeSantis’ objections on Tuesday, justices cleared the way for Thompson to revise her legal challenge and gave the governor’s lawyers until Wednesday “to show cause why he should not be required immediately to fill the vacancy in office of justice of the Supreme Court by appointing a candidate who was on the JNC’s (Judicial Nominating Commission’s) certified list of Jan. 23, 2020, and is now constitutionally eligible for appointment.”

When DeSantis, a Harvard Law School graduate, appointed Francis in May, he said he didn’t plan on her assuming the post until Sept. 24, when she will meet the 10-year Bar membership requirement.

If the governor is forced to choose from the list of nominees provided in January, the Supreme Court will lack a Black justice, DeSantis and his supporters stressed during Wednesday’s news conference.

“Look, I’m somebody that believes you stand for what you believe in. … I’m not going to begrudge anybody from taking some of these actions,” he told reporters. “The problem I have in this case is this particular representative is somebody who’s been very vocal about wanting to have a Black justice on the Supreme Court. Well, guess what? The petition she has filed right now would block a Black justice and then, if granted, force me to pick from the remaining names, who are all very good, but guess what? None of them are going to be a Black justice.”

But Thompson, a retired educator who is Black, said in a phone interview later Wednesday that DeSantis “has to shoulder that responsibility” because he and the nominating commission “contrived to recommend a person ineligible to serve” on the Supreme Court and eliminated other “highly qualified and eligible African-American” applicants for the post.

“He has the pigmentation, he has the melanin in his skin, but he has never supported causes that advance African-American people or civil rights or civil justice in this society,” she told The News Service of Florida.

The fight over the Black judge could play a factor in the November election in Florida, a battleground state with a history of close margins where DeSantis is trying to help his ally, President Donald Trump, secure a victory.

DeSantis’ accusations about Thompson’s “politically motivated” lawsuit came as the Republican Party of Florida took to social media encouraging supporters to “Stand with Gov. Ron DeSantis” and his appointee, using the hashtag #JusticeforFrancis in a series of tweets on Wednesday.

“The @FlaDems claim to support diversity and inclusion yet are waging a campaign against a minority justice-designate. Judge Renatha Francis would be the only woman and black jurist to serve on the @flcourts, and she’s committed to upholding the rule of law. #JusticeforFrancis,” the GOP tweeted in one message.

The support for DeSantis on Wednesday was bipartisan, with a number of Black Democrats —- including Miramar Mayor Wayne Messam, Broward County Mayor Dale Holness, and state Rep. Dotie Joseph, D-North Miami —- joining him at the press conference to plead with Thompson to drop the legal challenge.

Joseph, a lawyer who was born in Haiti, acknowledged that some Black appointees are what she called “sell-outs,” but she defended Francis, a member of the conservative Federalist Society legal organization.

“She is not a Clarence Thomas,” she said.

Holness called it “foolhardy” for Thompson to proceed with her lawsuit while “recognizing there will be no Black person on this Supreme Court of the state of Florida.”

“It would be wrong for us to be in that place,” he said.

But Thompson said it is racist to rationalize that Francis should be placed on the court because she is Black.

“It is the worst form of racial tokenism that I’ve ever seen. To suggest that those of us who asked for an African-American on the Florida Supreme Court. … Here’s one for you. Great. Ineligible, unqualified, paper-thin resume, but this is what you all deserve. This is what you want. No,” she said.

Speaking to reporters with DeSantis earlier Wednesday, Francis said she worked her way through law school with “no hand-outs, no hand-ups,” after emigrating to the U.S. from Jamaica.

“I said it before and I want to reiterate that I’m truly the epitome of the American dream,” Francis said, adding that she wants to be an inspiration “to all people, but especially young women, working moms and minorities.”

“I am you,” she said. “An everyday girl that gets up every morning, provides for her family, and tries to make a difference.”