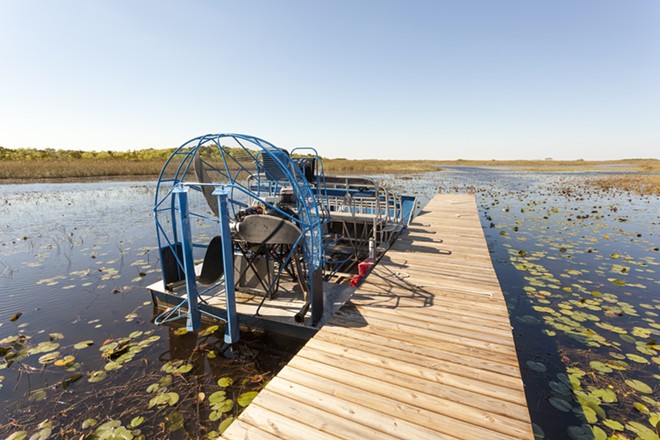 Photo by Philip Lange via Shutterstock
Commercial airboat operators would have to complete a state-approved course before taking on passengers under a measure —- named for a 22-year-old woman killed last year —- that started moving through the Senate on Monday.

But support from members of the Senate Environmental Preservation and Conservation Committee came after the proposal (SB 1612) was watered down so violators wouldn’t face jail time.

Called “Ellie’s Law,” the proposal, in part, would require airboat operators to take a Florida Fish and Wildlife Conservation Commission course and complete a course in first aid that includes cardiopulmonary resuscitation.

Sen. Lauren Book, D-Plantation, said the proposal would ensure “the public safety while experiencing the beauty of Florida’s Everglades while on airboat rides.”

Book is co-sponsor of the measure with Sen. Kevin Rader, D-Delray Beach.

Before the vote, the committee amended a portion of the bill to make violations a noncriminal infraction carrying a fine up to $500. The original version of the bill would have carried a penalty of a second-degree misdemeanor, which has a maximum punishment of 60 days in jail or a $500 fine.

“One of the things we’ve been focused on in the Senate is not creating new crimes,” said Committee Chairman Rob Bradley, R-Fleming Island. “I think we’ve criminalized a lot of things in the world. And every year, whenever there is something that comes up, people will say, let’s create another crime. ... Jail is not the answer for every ill that our society faces.”

Alan Richard, an attorney and former marine patrol officer with the Florida Fish and Wildlife Conservation Commission, expressed concern that the change will result in tickets being issued only when crashes occur.

The measure is named after Elizabeth “Ellie” Goldenberg, who died last May after being thrown from an airboat on an Everglades tour.

Goldenberg was with her family celebrating her graduation from the University of Miami, where she was an honor student involved with the Ring Theater.

The operator “stopped abruptly” as another craft was blocking the waterway, tossing her and her family into the water.

The House version (HB 1211), sponsored by Rep. Joseph Abruzzo, D-Boynton Beach, has yet to be heard. It is assigned to the Careers and Competition Subcommittee, the Natural Resources and Public Lands Subcommittee and the Commerce Committee.