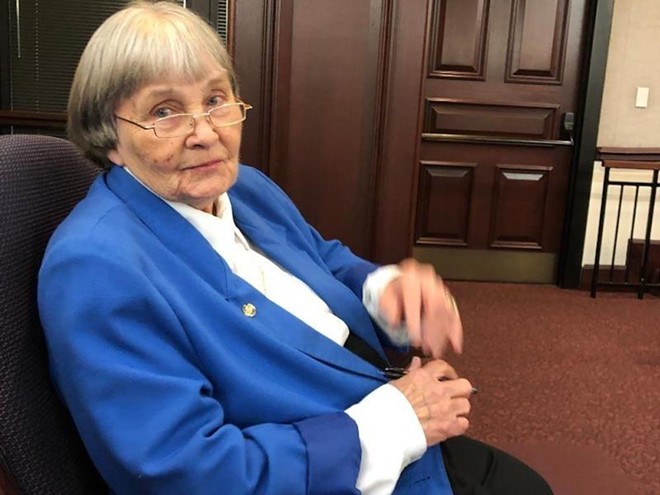 A three-judge panel of the 11th U.S. Circuit Court of Appeals upheld a district judge’s decision to dismiss Hammer’s lawsuit against attorney Lawrence Sorensen, who sent two emails to the lobbyist that included photos of gunshot wounds. Hammer raised a series of arguments in the case, including that Sorensen had violated Florida laws about cyberstalking, harassment and intentional infliction of emotional distress.

The appeals court, in a 14-page decision, said Hammer’s lawsuit did not allege “enough facts” to show that the laws were violated. As an example, the court said proving cyberstalking requires showing that the disputed communications served “no legitimate purpose.”

The court said Sorensen’s emails, which were “clearly intended to dissuade Hammer from continuing to support the availability of assault rifles,” had a legitimate purpose.

“No doubt the embedded photographs substantially turned up the volume on Sorensen’s message, but they did not negate his communications’ ‘legitimate purpose,’ as Florida law broadly construes that term, of trying to persuade Hammer that she should not continue to support the availability of assault rifles,” said the ruling by Chief Judge William Pryor and Judges Robin Rosenbaum and K. Michael Moore. “Because Hammer cannot show that Sorensen’s emails served ‘no legitimate purpose,’ she cannot prevail on her cyberstalking claim. This is true even if Hammer was startled, distressed, or disturbed by the receipt of Sorensen’s emails.”

The emails were "clearly intended to dissuade Hammer from continuing to support the availability of assault rifles," and had a legitimate purpose, the court ruled.

Similarly, in rejecting Hammer’s arguments about intentional infliction of emotional distress, the court pointed to part of state law that required her to show Sorensen’s conduct was “outrageous in that it is beyond all bounds of decency and utterly intolerable in a civilized community.”

“There is no doubt that the photographs are disturbing: they vividly show gruesome wounds,” the ruling said. “But we cannot say that they are ‘beyond all bounds of decency and utterly intolerable in a civilized community,’ particularly when considered in context. Images that are at least as graphic, if not ghastly, appear in many publicly released movies and sometimes appear in news footage, albeit with warnings. And here, Sorensen presented the images as part of his attempt to engage with Hammer in a debate on the damage that assault weapons can inflict on human beings. Debates on matters that are the subject of lobbying efforts are an aspect of living in a ‘civilized community.’ So whatever else may be said of the images Sorensen included in his emails, we cannot say they were ‘outrageous.’”

Hammer, a former national president of the NRA and a longtime influential lobbyist in Tallahassee, went to the Atlanta-based appeals court after U.S. District Judge Robert Hinkle in November 2018 dismissed her claims against Sorensen. Hinkle’s ruling came after Hammer filed a lawsuit against Sorensen and three other unrelated men because of emails she received. Hinkle’s dismissal was limited to Sorensen.

In his ruling, Hinkle acknowledged that Sorensen sending the emails “unsolicited to anyone, even a public figure who advocates gun rights, was inappropriate, indeed disgusting.” But the judge said Sorensen’s messages were protected by the First Amendment and that Hammer was not entitled to damages.

During arguments last month at the appeals court, Hammer’s lawyer, Kenneth Turkel, said Hinkle erred in finding that the messages were protected speech. He also argued that a series of previous court decisions have established that “you have a right to be let alone.”

“This was not public speech in a public place with numerous people engaged in some vigorous debate,” he said. “This was one private actor sending another private person gory pictures of mutilated bodies with no discussion about public issues.”

The appeals court focused on whether Hammer’s lawsuit could show violations of state laws and didn’t rule based on First Amendment issues. It also said her allegations didn’t meet the legal test to be considered an invasion of privacy.

“The facts Hammer avers do not establish that Sorensen intruded physically into a ‘place’ or ‘private quarter’ of Hammer’s where Hammer had a reasonable expectation of privacy, since Sorensen merely sent his two emails to the email address Hammer publicly lists in association with her lobbying activities for the NRA,” the ruling said. “To be clear, Hammer needed to plausibly allege an intentional intrusion into some private quarter. But Sorensen emailed the address Hammer publicly listed on the website for the Florida Association of Professional Lobbyists. And Hammer alleged no reason for Sorensen to have expected that this professional email address would have been associated with private quarters.”