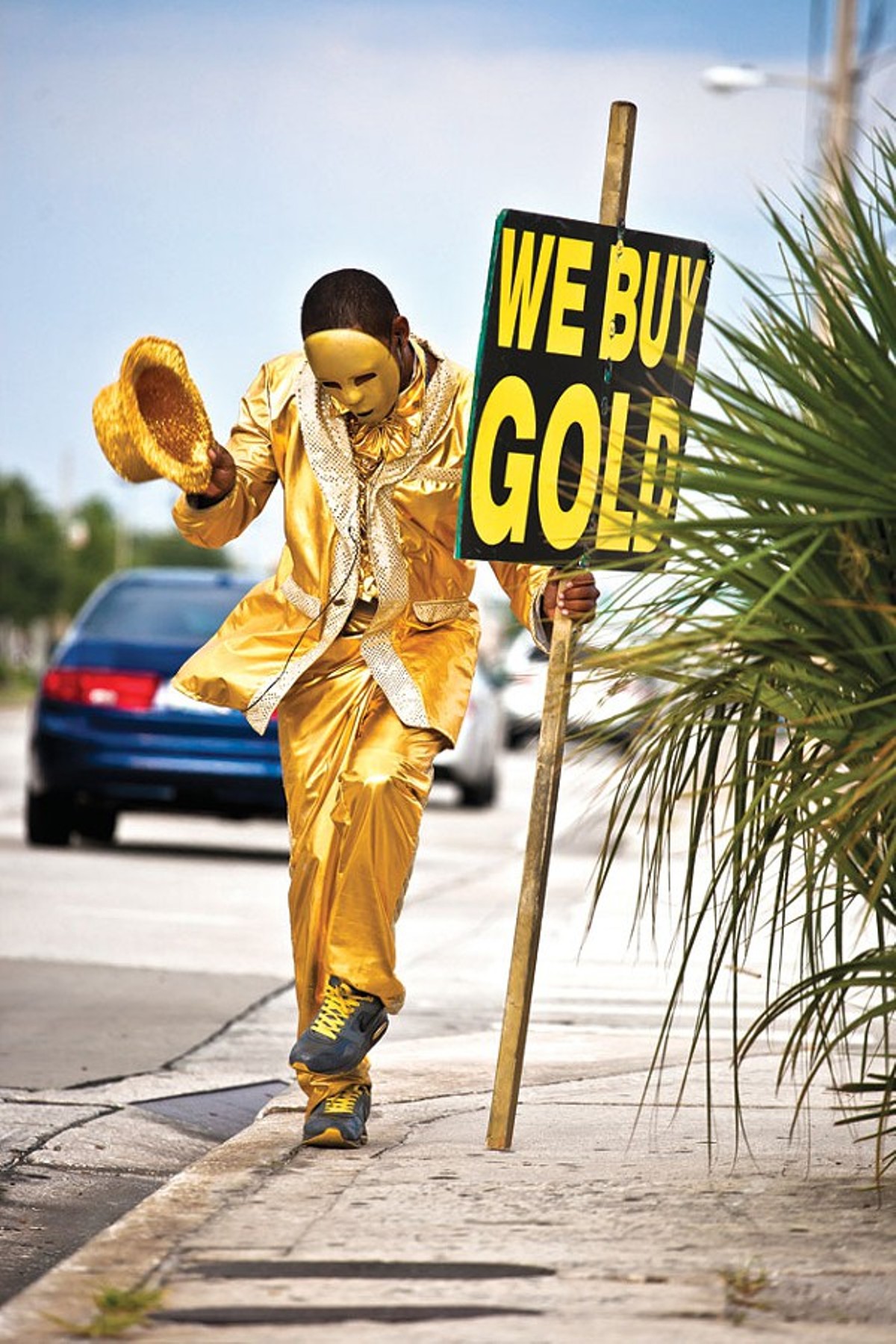 On most days, Mr. Gold was the brightest thing you could find on the stretch of Colonial Drive near Fashion Square Mall – both literally and figuratively. Dressed in a shiny gold lamé suit, a gold top hat and a shiny gold face mask, he was more than just another guy on the side of the road spinning a "Cash 4 Gold" sign. He was a hat-tipping, finger-pointing, happy-dancing sign of life on a sun-bleached stretch of Central Florida commercial strip that's groaning with traffic 24 hours a day. People smiled when they saw Mr. Gold, and even though they couldn't see his face through the mask he wore, they knew he was smiling back.

But over the past few weeks, Mr. Gold has rarely been spotted on his usual corner outside the Diamond Exchange at 3016 E. Colonial Drive. In his place, and on the other three corners across the street from his, are men holding signs that read "60 percent off – everything must go!"

That's because Diamond Exchange, the business for which Mr. Gold (aka Jose Melendez) had created the Mr. Gold name (even if it wasn't his real one) and persona, is closing its doors.

Business, says Diamond Exchange owner Virginia Ann Rodriguez, has slowed to a crawl. When she moved to this space from another location in 2010, she says, Diamond Exchange was a jewelry store, but before long, she found that customers weren't coming to buy gold from her – they wanted to sell it to her.

"I was like, 'No, this isn't how it works. You're supposed to come in here and buy from me!'" she says. "But then I realized, it's like, you know, survival. So I thought, how do I utilize this? Because, you know, I had to pay my bills."

So she hired a guy to stand outside wearing a gold suit and twirl a sign advertising that she did, like a lot of businesses along Colonial, pay cash for gold. She says she went through a couple of mediocre sign spinners before Melendez came along. "When he first came, I told him, you know, it's OK to move a little bit," she remembers. "I told him, 'You can be a character.' Then, I don't know how he came up with it, but he took off with this whole hat thing, tipping it and dancing."

And before long, Mr. Gold became a minor Orlando celebrity. In 2012, when we put Mr. Gold on the cover of our Best of Orlando issue, he told us that he took the job in 2010 out of desperation – he was an ex-felon, he says, and he had a hard time finding work until he got the job at the Diamond Exchange. But rather than looking at the job – hardly what most people would consider a cushy gig – as a slog, he saw it as a blessing.

"I don't like it, I love it," Melendez told us then. "One hundred percent. ... I don't call it routine. I call it praise and worship."

But for Rodriguez, there just isn't as much shine in the gold business as there used to be.

Unfortunately, she says, the economy in this area of Orlando is still sluggish and she's not sure what kind of business she could open in the space to make money. But she owns the building, and she says she's going to take some time to try to figure it out. "I'm tired," she says, "and it's sad. But I don't get a choice. Sink or swim and I refuse to sink."

So does Mr. Gold – Rodriguez says Melendez now has a new job and has only been working for her a couple of days a week while she clears out her inventory. "He's here today," she says, as Mr. Gold stands outside waving to passengers who honk their horns and wave back at him. "But it's sad. It's weird. It's kind of a goodbye." – Erin Sullivan