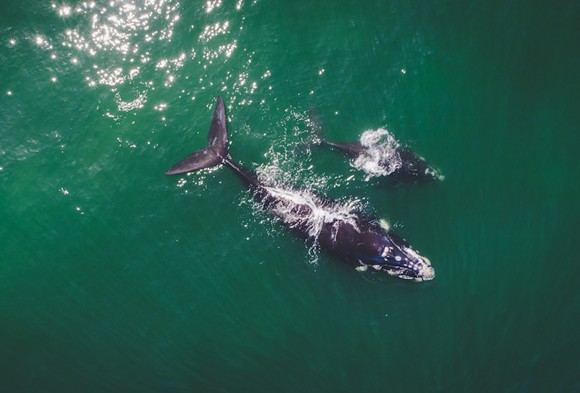 Right whale photo via Adobe Stock
Annual whale migration has just begun, boosting the odds of glimpsing the massive creatures near the Orlando area, and few ocean sights are as infrequent and glorious.

There are Central Florida beaches where whales have been spotted this migration season already, and we'll likely see more, offering local whale watchers a couple of fleeting outposts.

An endangered North Atlantic right whale mother and calf were seen off the coast of Ormond-by-the-Sea in Volusia County, reported the Daytona Beach News-Journal. Marine Resource Council officials are unsure if the mother and calf are the same spotted off Georgia or another pairing, so there could be two, or even four, endangered right whales cruising down the Volusia coast currently.

Since the New Year began, humpback whale sightings off the Flagler and Volusia county coasts have been reported daily to the Marine Resources Council, said whale sighting hotline coordinator Julie Albert to the News-Journal.

Ormond-by-the-Sea, which has been making out as a real whale hotspot to start the year, had humpbacks seen on consecutive days. A humpback was seen off of Flagler Beach on Wednesday.