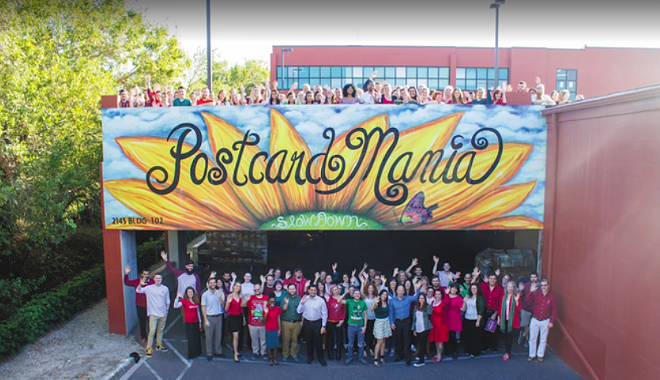 On Monday, a Clearwater company asked employees to work at the office during Hurricane Ian as the storm gathered strength in the Gulf Of Mexico.

PostcardMania, a marketing company run by CEO Joy Gendusa, told employees they’d be working during the storm, which is currently hitting Florida as a borderline Category 5 hurricane.

“We are not closing. We are working,” a message from Gendusa read. “We’ll make it super fun for the kids!”

Employees were advised by Gendusa, a devout Scientologist, that they could bring their families, including children and pets into the office so they could work during the hurricane.

In her text to employees, Gendusa dismissed reports about the dangerousness of the hurricane.

“There’s always more hype in the media than any storm that has ever hit here. PostcardMania is the best place to be - its super strong,” Gendusa said, referring to the company’s headquarters that is over 60,000 square feet.

Reports say that during a Zoom call the same day that the texts were sent, Gendusa made it clear that she didn’t want Ian to stand in the way of production.

“Obviously you feeling safe and comfortable is of the utmost importance, but I honestly want to continue to deliver and I want to have a good end of quarter,” Gendusa said.
“And when [Hurricane Ian] turns into nothing, I don’t want it to be like, ‘Great, we all stopped producing because of the media and the maybe that it was going to be terrible.’”

The messages and Zoom call notes were first made public yesterday by Labor Notes journalist Jonah Furman and have since gained national attention in VICE News.

PostcardMania has not yet responded to a request for comment from Creative Loafing Tampa Bay, but the company did tell VICE that it was “not correct” that Gendusa was asking employees to work through the hurricane.

“Our office is closed Wednesday and Thursday,” the company told VICE. “We have some employees voluntarily working remote who are safely located in non-evacuation zones. Our building is open as a shelter during the hurricane for staff, friends, children and pets. We did this during Irma as well.”

A Wednesday phone call to the company confirmed that they are currently closed during the storm.

“We will reopen as soon as it is safe for our employees to return to the office,” the voicemail for PostcardMania said.

An anonymous employee told VICE that it was public pressure following Furman’s post about the company that made management decide to shut down for the hurricane.

“I was under the impression that we were expected to work, and if you had to work from home or an evacuation zone, log in on your laptop,” the employee said. “The messaging was ‘production will not slow down,’ consistently up until that post went viral.”

Employees who spoke to VICE said that workers were expected back in the office Friday, and that they still had to hit their 40 hours of work, even if that meant working through the weekend.

In a Wednesday morning email that was shared by the company with VICE after the news outlet published its story about the company, Gendusa apologized for the company’s messaging to employees.

“I know this has been a stressful time, and I want to apologize to anyone who received our text message on Monday and felt that it came across as insensitive,” Gendusa wrote. “That text did not accurately reflect how seriously we were taking this storm and everyone's safety, and I regret that it was sent without better judgment.”

In an interview with Scientology-owned “Freedom Magazine” Gendusa said that she moved to Clearwater to study Scientology more than 25 years ago.

She estimated that around a quarter of the employees at PostcardMania were Scientologists. The Tampa Bay Times once described the company as a workplace that “focuses on individual, respect for all.”

Freedom Magazine said that Gendusa is a high school dropout, and that all of her business acumen is self-taught.

Her source for gaining her business acumen is a 12-volume series containing a management methodology authored by Scientology Founder L. Ron Hubbard.

In addition to founding the religion, Hubbard wrote his thoughts on how organizations of any kind can operate successfully and prosper.

Gendusa told the magazine, “I studied a lot of Mr. Hubbard’s writings on administration and management, where I learned things and then applied them in practical ways to my life and, secularly, to my business.”

In the same article, PostcardMania’s Public Relations Director, Jessica Lalau, said that they follow Hubbard’s teachings to get their work done.

“We don’t play around with our marketing,” Lalau said.