Central Florida undocumented youth to Trump: 'No idea who you messed with' 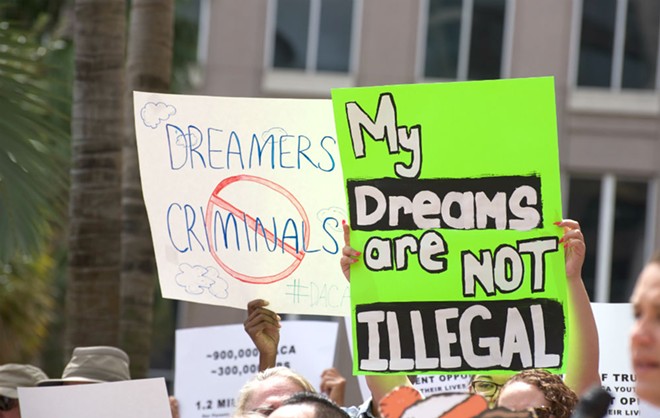 "You have no idea who you messed with," said Anallely, a Central Florida DACA recipient, to a crowd outside Orlando City Hall. "They better get ready for this fire."

More than 100 people gathered in Orlando on Tuesday after U.S. Attorney General Jeff Sessions announced the Trump administration would rescind DACA with a six-month delay to give Congress a chance to pass a bill to protect recipients. Sessions claimed DACA "denied jobs to hundreds of thousands of Americans by allowing those same jobs to go to illegal aliens." Trump, who called some Mexican immigrants rapists and criminals during his campaign, and his administration have been accused by critics of upholding white supremacy by rolling back DACA. The 2012 Obama-era policy gives undocumented youth who immigrated as children a work permit to get a job legally without fear of deportation. President Barack Obama instituted his executive order after members of Congress failed to pass the DREAM Act in 2010 that would have given undocumented youth a path to citizenship.

Photo by Monivette Cordeiro
Anallely, who asked to be identified by first name only, is one of nearly 33,000 DACA recipients who call Florida home. The legislation has allowed her to get a driver's license, attend a local college and even help her parents buy their first home. Losing DACA would be "disastrous" for her family, she says.

"I'm so exhausted of all the things I have to go through because of a paper," she says. "A paper does not define me. A paper does not define any of us. … We're going to be right here until the day you pass something that's going to actually give us a future and a path to citizenship, not just for us, but for our parents, because they were the original Dreamers."

Anallely says she wants the media to stop demonizing the parents of undocumented youth who brought their children to this country for a better life without the proper documentation.

"We're not criminals," she says. "We're not stealing jobs. We're just here like any other American, and we're here to fight."

Photo by Monivette Cordeiro
Undocumented young people and other immigration advocates are ramping up efforts to persuade Congress to pass a comprehensive immigration reform not only for themselves, but for the estimated 11 million undocumented immigrants who live in the U.S. In Orlando, advocates were also concerned with the end of Temporary Status Protections, also known as TPS, for immigrants from Haiti, Sudan, South Sudan, Honduras, Nicaragua and El Salvador. The Trump administration announced in May that it was extending protections for Haitians for another six months so that refugees could prepare to leave the country. Isabel Sousa-Rodriguez, an organizer with the Florida Immigrant Coalition, says since the Trump administration came into office, the rhetoric has been hateful and divisive.

"We don't stand for it," Sousa-Rodriguez says. "They are saying that they will no longer issue any new renewals for any of the youth who have benefitted from it, nearly 900,000 young people who have received temporary work permits and have been able to buy homes, buy cars, get jobs, pay taxes and contribute billions of dollars into our U.S. economy."

United We Dream, an immigrant youth organization, says DACA paperwork and work permits are valid for recipients until their expiration dates. If your DACA filing expires between now and March 5, 2018, you have until October 5, 2017 to file for a two-year renewal. The Trump administration has indicated no new DACA applications will be accepted in these six months. United We Dream adds that the Department of Homeland Security will no longer allow DACA recipients permission to travel abroad.

Photo by Monivette Cordeiro
Eli Garcia, of the Hope CommUnity Center in Apopka, had tears in her eyes as she thought about telling her mom the program they had all benefitted from would be ending.

Garcia, who has been living in this country for 17 years, says local governments like Orange County and the City of Orlando need to make it clear that their communities are safe for undocumented people. On Tuesday, Orlando Mayor Buddy Dyer released a statement saying DACA recipients are an "important part of our inclusive community" and urging Congress to "give our Dreamers protection, hope and peace of mind."

Garcia says the Trump administration decision to rescind DACA makes her angry, but it also gives her the energy to fight.

"We shouldn't give up," she told the crowd in Orlando. "These are times when Dreamers like myself need to be together to stand up, and allies need to build the bridges with us to continue fighting against this."