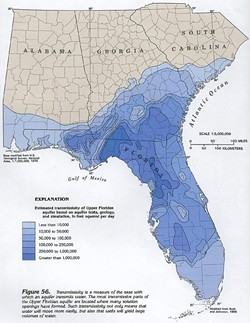 Here in Orlando, we love our Canadian snowbirds — mostly. Getting stuck behind one in traffic may cause you to tear your hair out, but they make up for it by pumping thousands of their loonies (and toonies!) into the local economy.

This week, though, the Canadian Broadcasting Corporation published this article, warning of potential "climate refugees" fleeing Florida in the coming years due to rising sea levels. Harold Wanless, the chair of the department of Geological Sciences at the University of Miami, calls much of South Florida "doomed."

As we've reported in the past, the combination of rising sea levels and a rapidly-draining Floridan aquifer poses a real threat to Florida's sustainability in the coming years. We took a good step this past election by passing Amendment 1, which allocates money from real estate sales to conservation efforts, but the state Legislature has yet to address our dwindling fresh water supply. Even scarier, efforts are underway to get fracking approved in the state, which would literally eat away at the aquifer. State Sens. Darren Soto, D-Orlando, and Dwight Bullard, D-Cutler Bay, are working on a bill that would ban fracking in the state, which will hopefully make its way to the floor for a vote next year.

But even Amendment 1 and a fracking ban may not be enough to alleviate the harmful consequences of rising sea levels and a lack of fresh water. Will we see a mass exodus of South Floridians in the next decade, similar to the migration of the Okies from the Dust Bowl in the 1930s, kind of a reverse snowbird migration? Only time will tell.