Burn Florida to the ground 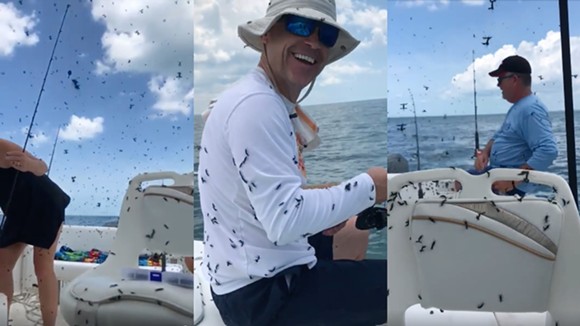 Photos via Dana Hayes Erickson/Facebook
You took it too far this time, Florida.


The terror in the video, which has over 2 million views, is obvious.

"We gotta get the hell out of here. We're taken over by bugs," a woman says. "This is fucked up."

"Look at that," another woman says, pointing to the seats crawling with interlocking black insects and letting out a cathartic scream as more of the randy turds have sex in her hat.

"They were everywhere," Erickson later told Bay News 9. "In the cabin of the boat. They were in our seats, under the seat mats, in our towels, in our shoes. Everywhere. My bathing suit."

Erickson told the TV station that they fled the lovebug attack at 40 miles an hour but that wasn't enough to get them off the boat. Two hours of power-washing finally cleaned off the gross corpses. The only trace left of those lovebugs is this disturbing video, which we will never be able to unsee.