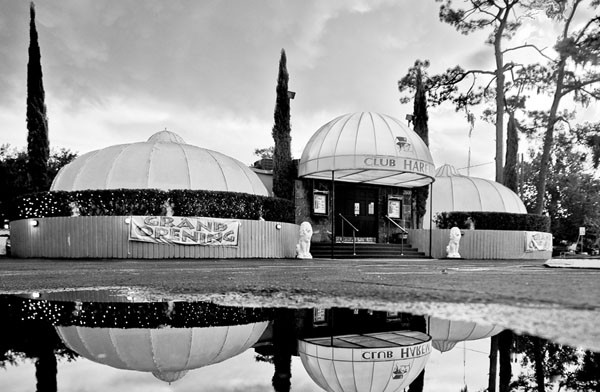 Photo by Jason Greene
NIPPLED IN THE BUD - Following years of investigation and harassment by Winter Park city government and police, the double-domed institution known as Club Harem finally gets paid off ... and told to shut up

It wasn't exactly the type of transparency that the Winter Park City Commission liked to get its feathers ruffled over in the public spotlight, so at its regularly scheduled meeting on May 9 - amid the standard municipal fanfare of bond issuance and building safety - the self-proclaimed City of Culture and Heritage excused itself for 10 quiet minutes of private deliberation at 7:50 p.m. The mayor, commissioners and legal staff then huddled together in room 200 to discuss an ongoing problem: the adult-themed thorn in the city's side known as Club Harem.

Perhaps unexpectedly, the "lawfully closed" discussion did not involve new zoning strategies to close the vaunted twin-domed Lee Road watering hole previously known as "The Booby Trap" (for obvious reasons), nor did it involve more talk of police intervention into whatever lifestyle issues - drugs, crime, nudity - the city's only strip club ostensibly brought along with its very existence. Instead, the discussion lasted just long enough for the city government to sign off on a $250,000 payout to Club Harem and its attorney, Steve Mason, to settle a federal lawsuit that was filed last year. It was a muted move more than five years in the making, one that gives the appearance that the city is finally giving in and accepting blame for its sloppy, if not illegal, handling of the once thriving adult entertainment club.

But there would be no apologies that didn't include dollar signs. Written into the settlement agreement was a little bit of damage control: "No party, including any employee, agent or attorney for a party hereto, shall make any statement disparaging the other party or disparaging any employee, agent or attorney of a party. In any public statement, the parties and their agents/attorneys shall state only that this case was amicably resolved and that neither party admitted liability."

Given the years of complaints filed against the city by Mason and other attorneys, given the spate of police personnel fired or demoted throughout numerous investigations, given that the end result - a quarter of a million dollars being handed over to a strip club by a city at the end of its financial tether - was, in fact, public record, that explanation remains hard to believe. The details are all still out there; the city just paid a hefty price to try to keep them quiet, or, more likely, to keep them from getting worse.

Mason filed his lawsuit on behalf of Club Harem's ownership, Hugh Johnson Enterprises Inc. - whose principals, Carol and Gerald Uranick, had been operating the business for more than a decade - in the U.S. District Court-Middle District of Florida on Sept. 20, 2010. The move came after a litany of perceived infractions by the city (many of which have been reported by the Orlando Weekly) - so many that Mason, a First-Amendment attorney, felt comfortable taking the city to task on the constitutionality of its various punitive actions.

Ever since Winter Park annexed the area that included Club Harem's stretch of Lee Road in 2004 - the city allegedly hoped to leap-frog the property to get to the stronger property and business tax base beyond it - the club came under unprecedented scrutiny by city officials and police.

"After aforesaid annexation, Winter Park fixated upon Club Harem and engaged in a systematic series of events designed not only to unlawfully harass the nightclub, but to cause financial damage and injury in the hope that the club could be closed permanently," Mason writes in the federal complaint. "The effect of Winter Park's design and actions not only injured the nightclub financially and hurts its business reputation and patronage, but the net result was to harass, frustrate and prohibit a constitutionally protected form of First Amendment expression, i.e., erotic/striptease dancing."

The trouble began in 2005 when Winter Park police, the Metropolitan Bureau of Investigation and the state Department of Alcoholic Beverages and Tobacco (DABT) combined forces during the summer to pin illegal activities on Club Harem. An email from a Winter Park detective was quoted in a Jan 5, 2006, BABT email saying that "Winter Park would like to have Club Harem's occupational license revoked at the end of this investigation, thus preventing them from doing any further business in Winter Park."

True to form, the agencies concocted enough evidence in what they called "Operation Double D's" to call out the local media and orchestrate a sting operation on Club Harem on March 17, 2006. In the process, they allegedly manhandled manager Misty Bell - who had already succeeded in having a Winter Park sergeant demoted for a previous harassment claim in January 2006 - and lured alleged drug dealer Timothy Thomas from a nearby K-Mart parking lot into Club Harem to give the appearance of a management willing to support an illegal narcotics trade, or at least tacitly accept it.

The cops had another go at the club in early 2008, assigning undercover officer Carlos Calderon to the strip-club detail. That operation produced 20 hours of thumping, muffled surveillance in an attempt to corner alleged drug dealer Shawn "Disco" Dawson with 16 felony counts for providing police with $850 worth of drugs and, again, implicate Club Harem for allowing such nefarious dealings to go on within the building. Trouble was that Calderon apparently formed a relationship with dancer Michelle Merry, something he denied under oath but other witnesses supported. Calderon was terminated soon after.

Throughout the process, Club Harem has gone through various stages of operation, occasionally closing down outright and at other times opening for limited periods. When it appeared that the club had been shuttered for good last February, Orlando Sentinel reporter Mary Shanklin noticed and mentioned it to the city. According to legal papers filed by Mason in April 2011, city officials tried to "cajole" the reporter into sitting on the story until Winter Park could pass tighter restrictions on unopened businesses with non-conforming use (or adult entertainment) licenses, cutting the allowed time of closure down from six months to three months. Shanklin ran with the story anyway, allowing the owners to consider a cat-and-mouse game of opening whenever they choose to remain within the legal limits.

In fact, patterns of behavior like the Shanklin incident - along with other instances of uncooperativeness by the city in numerous public records requests by Mason and others - may have been what finally convinced Winter Park to give up its battle. The April Rule 26 Disclosures - basically a list of witnesses intended to be called in for trial - filed by Mason, read like the beginnings of a potentially lurid municipal screenplay: former attorneys for the city, former mayors and other public officials, strippers, drug dealers, police officers and Shanklin are all included, each with a small biography of his or her part in the shambolic morality tale turned comically immoral.

But, now that Mason retrieved the $250,000 check from the city on May 25, you won't hear much about it from anyone. Mason, who is typically outspoken, will only allow for the scripted response: that the case was "amicably resolved" and "this running battle is finally over." City spokeswoman Clarissa Howard adds that "the city will not be commenting on the settlement."

In the end, the club keeps its liquor license and its adult-entertainment permit, while Winter Park maintains what's left of its fragile dignity and prudence, at least in the public eye. As for the future of adult entertainment, or even Club Harem, in Winter Park?