Breaking: Pam Bondi's volley for a stay on marriage has been denied by the Supreme Court 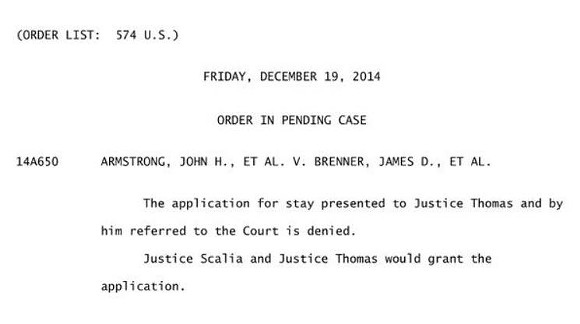 HOORAY! Ladies and ladies and gentlemen and gentlemen, we have something of (another) Christmas miracle here. Today, the U.S. Supreme Court has denied a stay filed by Attorney General Pam Bondi when she just couldn't get her way. You'll likely recall that Bondi filed a motion for the stay even after the U.S. Supreme Court said it wasn't interested in entertaining these ridiculous schemes anymore. Yesterday, the ACLU upped its ante filing a second complaint against the stay, but taking it a step further. According to the HRC Orlando Facebook site, we will likely, as we should, see marriage equality in Florida on Jan. 6. HAPPY NEW YEAR!!!!

Yesterday, we sat in on a tele-townhall with Equality Florida and attorneys who were not terribly certain things would go this way. Thankfully, that's not what we have to report today. More when we know it.

Update: More info on how, as you can read above, our friends and Justices Clarence Thomas and Antonin Scalia were the two sticks in the mud here. The only two. From the Advocate.

Update 2: Equality Florida has issued its official statement. Here it is below:

Today, the United States Supreme Court denied the State of Florida’s motion for a stay of an August federal court ruling that overturned the state’s ban on marriage for same-sex couples. The order means the stay expires at the end of the day on January 5. Same-sex couples will be free to marry in Florida once the stay in the ruling is lifted.

"We are thrilled the U.S. Supreme Court has denied the State's request to delay marriages in Florida,” said Nadine Smith, CEO of Equality Florida, the state’s largest advocacy organization for gay, lesbian, bisexual and transgender Floridians. “Every day of delay is another day of harm experienced by thousands of loving and committed same-sex couples in Florida. It's time to break out the wedding bells! We look forward to January 6th being a special day — Florida is ready for the freedom to marry."

On August 21, US District Court Judge Robert Hinkle ruled in favor of the freedom to marry and respect for marriages legally performed between same-sex couples in other states in the federal marriage cases, Brenner v. Scott and Grimsley and Albu v. Scott, brought by the ACLU of Florida, SAVE and private counsel.

Daniel Tilley of the ACLU of Florida emphasized that now clerks across the entire state have a duty to marry couples. “The Supreme Court has spoken, and we expect clerks to begin marrying couples who will finally get access to the protections their families deserve.”

The District Court placed a hold on the decision to allow time for an appeal, but the stay is scheduled to expire on January 5. On December 3, the U.S. Court of Appeals for the 11th Circuit denied the State of Florida’s request for an extension of that stay, allowing same-sex couples to marry, even as the appeal in the case proceeded.

Update 3: Pam Bondi has opined signaling that she'll abide by the ruling, but there are complications, namely the fear of certain county clerks being freaked out about possible misdemeanor charges. Meh. THAT WON'T HAPPEN, PEOPLE.

"Tonight, the United States Supreme Court denied the State’s request for a stay in the case before the 11th Circuit Court of Appeals. Regardless of the ruling it has always been our goal to have uniformity throughout Florida until the final resolution of the numerous challenges to the voter-approved constitutional amendment on marriage. Nonetheless, the Supreme Court has now spoken, and the stay will end on January 5.”