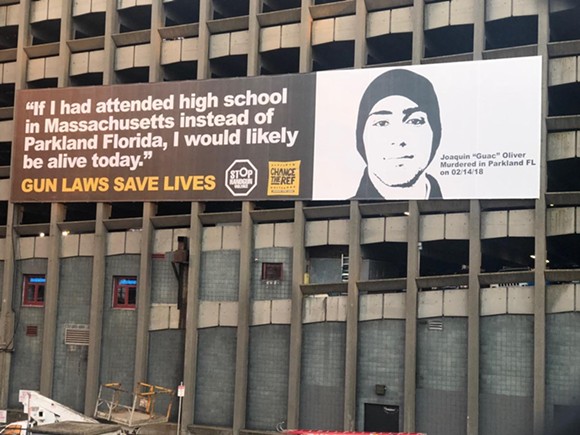 Photo via Stop Handgun Violence and Change the Ref
A billboard designed by the father of a Parkland high school shooting victim that takes aim at Florida's gun laws is debuting Thursday in Massachusetts.

The sign, hung outside a Boston parking garage, has a photo of 17-year-old Joaquin Oliver, one of the 17 students and teachers killed by a shooter earlier this year at Marjory Stoneman Douglas High School.

"If I had attended high school in Massachusetts instead of Parkland Florida, I would likely be alive today," the billboard reads. "GUN LAWS SAVE LIVES."

The billboard was created by Joaquin's father, Manuel Oliver, who started the gun reform organization Change the Ref with his wife Patricia Oliver after their son's murder. Most recently, Manuel Oliver made a 3D-printed sculpture of his son to protest 3D-printed guns.


For the billboard, Change the Ref partnered with Stop Handgun Violence to compare "effective gun laws in Massachusetts with the lax dangerous gun laws in Florida, particularly Florida’s lack of criminal background checks for private gun sales as well as unregulated and unrestricted access to assault weapons and high-capacity ammunition magazines," according to a press release.

Before the Parkland shooting, Florida was said to have "some of weakest gun laws in nation." After the shooting, Florida lawmakers passed the "Marjory Stoneman Douglas High School Public Safety Act," which raises the statewide minimum age to purchase a rifle to 21, bans bump stocks and requires a three-day waiting period for all purchases of rifles and other long guns. The new law also allows certain teachers to be armed at schools.

"When Joaquin was murdered with an assault weapon designed for war, we asked ourselves how this could happen in our town and in our state?" Manuel Oliver said in a statement. "We soon discovered that there were many common sense gun laws in Massachusetts and other states that could have prevented the senseless murder of our son if they were in place in Florida."

"This new billboard is a wrenching testament to the price we pay for politicians who are too afraid to stand up to the hard-line gun proponents at the helm of the NRA and demand change," Markey said in a statement. "In Massachusetts, we've found ways to make progress despite NRA opposition to sensible gun safety legislation. It's time to pass federal legislation that will ensure that all states have the same strong gun laws as the Commonwealth."