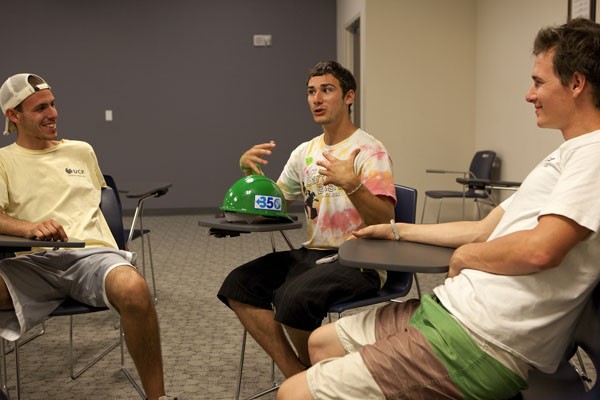 Hank Harding knows "Lake IDEAS" - a pond at the southwestern end of the east Orlando campus of the University of Central Florida - better than most anyone. Giving a tour to a reporter, Harding names the native plant species bordering the lake, and, further removed from the shore, the species that once thrived before he took a shovel to the ground. "That's an invasive," Harding says, gesturing at a felled camphor tree. "The major ingredient in Vicks VapoRub. I actually helped take that  one down."

In the spring of 2008, this lake was retention pond 3A, where water bottles, plastic bags and errant lacrosse balls from nearby athletic fields littered the shore. It was around that time when Harding, a newly declared environmental science major, met another new recruit to his field, Chris Castro, in his environmental sociology class. Inspired by the subject matter and the dearth of environmental action on campus, the two launched a group the following summer called Intellectual Decisions on Environmental Awareness Solutions (IDEAS). They started small, adopting pond 3A and recruiting a handful of friends to clean it up. But with a dose of scientific curiosity and youthful ambition, the group grew quickly.

IDEAS at UCF has convinced student government to not only recycle its paper but use recycled paper; introduced local school kids to the concepts of recycling, renewable energy and sustainability; spawned a lake-restoration company that turns a small profit; is currently developing a new prototype of "aquaponic" small-scale agriculture; and helped to create the U.S. Department of Energy's student ambassadors program, among many other things.

Aware of its own success, IDEAS created a 501(c)3 nonprofit organization with the same name that acts as a repository of information for like-minded students to launch similar hands-on campaigns at their campuses. Today, there are IDEAS chapters at 10 universities across the country, "professional" chapters in Atlanta and Washington, D.C., and even a chapter at a high school in Miami. At the end of this month, Viktor El-Saieh, former president of the Florida International University chapter of IDEAS, will be in Haiti, teaching children to "upcycle" plastic bottles by shaping them into sculptures and marketable goods.

The federal government knows about IDEAS - Castro interned for the Department of Energy in the summer of 2009 - and has praised the group's "Kill-a-Watt" energy savings campaign. In June, the Florida Wildlife Federation will name IDEAS the "conservation organization of the year."

"I think more and more people are seeing that these guys are action figures," says Linda Stewart, a former Orange County Commissioner who presented IDEAS with the county's Green Leaf Award for Environmental Excellence last December. "They're not just talking."

The group's name is not just a clever acronym, but an organizing model: students from various backgrounds propose their own environmental initiatives, and then sympathetic group members supply the manpower to make that person's idea a reality.

Take, for instance, the group's "ecosystem facilitation" projects. In early 2009, Zak Marimon, then an undergraduate studying environmental engineering, noticed that after herbicides were sprayed in the ponds at his condo complex in Waterford Lakes, the fish died off, and only weeks later, the excess algae that the copper-laden chemicals were supposed to combat had returned. Based on his research, Marimon came up with a more sustainable method: planting a diverse array of native plants around the shore, which would help breed microorganisms to control the lake's nutrient levels.

Marimon got the green light for his experiment from condo managers, as well as the St. John's River Water Management District, so he went to his friend, Hank Harding. Before long, a dozen people from IDEAS were wading in the two lakes near his home, pulling up weeds and planting duck potato, pickerelweed and softrush. The lake revitalization strategy was put in place at UCF's "Lake IDEAS" the following year, and before long, Marimon had created a small business venture called Agrarian Land and Pond LLC. "Without that help, I couldn't have gotten started," Marimon says. "I needed to prove that it worked."

Another successful initiative has been IDEAS for Education, led by Sebastian Church, the group's vice president. Church, an education minor, has orchestrated visits to Lake George Elementary, Discovery Middle and University High schools to discuss environmental issues with kids. Last semester, IDEAS members taught pre-schoolers at UCF's Creative School for Children about recycling with a hands-on demonstration on sorting paper, plastic and cans.

"The children really loved it," says Diahn Escue, a teacher at the school. "Now, [they] are constantly bringing in things to do recycled art projects."

Though IDEAS embraces scientific education, the group shies away from political discussion. "We're an active group, but we're not a group of activists," Church says.

For example, during the recent battle over the school's Arboretum - a patch of land that is home to a student-run vegetable garden on which the university has indicated it may build - IDEAS hasn't been involved in protests, though it endorsed the continued conservation of the area. "We're a very unbiased group," Castro says.

The group's membership is also diverse, as Castro will admit, and yields different opinions on the matter. "I think that in some cases we should take more of a stand in political issues," says Samantha Ruiz, IDEAS' president. "We are a group of people that want a better environment to live in, and right now, policy is the way to make that happen."

Ruiz' vision is already playing out, to some extent. Earlier this month, the group took a vegetable-oil-fueled school bus up to Power Shift, a politically charged conference of environmental organizers and activists in Washington, D.C. On April 20, the anniversary of the Gulf Oil spill disaster, IDEAS members visited BP stations and, harkening to the events of Sept. 11, 2001, advised drivers to "Never Forget." And during the most recent iteration of its Bikes Save Consequences rally, where students cycle, skate and jog around the UCF campus to promote alternative modes of transportation, students shouted "Don't be a fool! Ride your bike to school! Don't be an ass! Ride your bike to class!"

Group founders Castro and Harding both graduated from UCF last semester. Castro works for the school's Department of Sustainability and Energy Management, while Harding works for Sterling Central Apartments, the UCF area's first "green complex," according to the Central Florida Future student newspaper. Though both have jobs that relate to environmental stewardship, it's not enough to satisfy either of them. "We're kind of in this point of like: what we want to do in the world is not exactly available for us to do yet, for our career," Harding says. "We're so good at working without getting paid, that we don't know how to get money."

Castro and Harding are working to start an environmental consulting company that evaluates the energy efficiency of homes and businesses, then brings in companies to install energy-saving equipment. Castro predicts that by the time the business is operational, "we'd trickle in the companies that we've created through IDEAS," and therefore, take a cut of the profits.

As for the IDEAS members still in school, they also admit their enthusiasm for the group isn't entirely selfless.

"You always want to leave a legacy, you know?" Church says. "And especially at a school like this. Fifty-seven thousand kids, goddamn."

Alaina Bernard, land manager for the Landscape and Natural Resources Department at UCF and the faculty advisor to IDEAS, thinks the group is indeed leaving its mark on the university. "I think they come to the table with an incredible amount of passion, but the thing that makes them different is that they know how to put their passion into action," she says. "[What they do] results in tangible things."