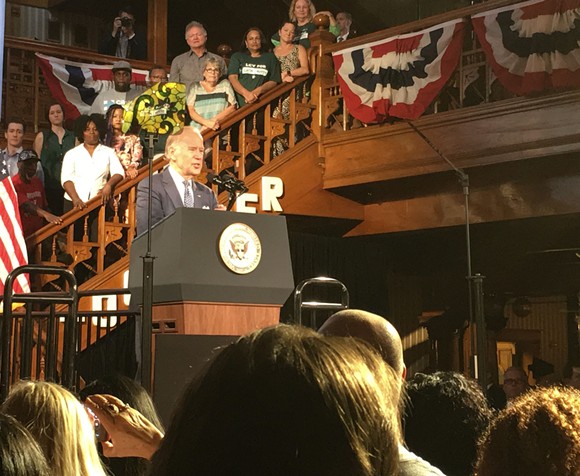 "I've never seen a candidate who knows so few facts," Biden told supporters of the Democratic nominee gathered inside the Cheyenne Saloon. "I, honest to God, don’t believe ever in the history of the United States of America has a major party candidate been less informed, dangerously uninformed, like he is. … The way he comports himself and the words he utters, and I mean this with every fiber of my being, are truly beneath the dignity of the office of the president of the United States."

Biden also mocked Trump for an early-morning Twitter tirade against former Miss Universe Alicia Machado, who says she was belittled by Trump and accused him of calling her "Miss Piggy."

"What kind of leader awakens at 3 o'clock in the morning and tweets Hillary helped 'disgusting Alicia M. become a U.S. citizen so she could use her in a debate'?" Biden asked. "This guy wants to be president of the United States of America."


Did Crooked Hillary help disgusting (check out sex tape and past) Alicia M become a U.S. citizen so she could use her in the debate?

Biden said Trump's statements have made many world leaders nervous about America's positions on foreign issues, especially in relation to Russia.

"His threat not to protect the Baltic states against a Russian invasion of a NATO ally required me to go from Australia to meet with all three Baltic presidents — Latvia, Estonia and Lithuania — to tell them, no that is not only not our administration view, it’s not the view of any Republican except Donald Trump," Biden says.

The vice president continued to make the case that the U.S. was in the best position for success in the future, citing jobs increases, economic gains and the quality of higher education.

"Hillary is the only candidate who has any notion of what the immense opportunities are," Biden said. "I’m so sick and tired of hearing America talked down. She needs you. We need you."