In the absence of state leadership, some Florida counties are reopening their beaches 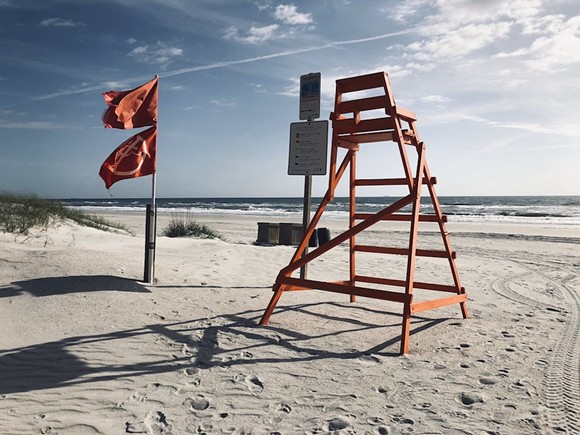 Photo via City of Jacksonville/Twitter
Ready to hit the beach? Jacksonville-area residents apparently are, and Mayor Lenny Curry says it's safe – as long as you keep the recommended distance from others while performing "essential activities."

The mayor made clear what activities are considered essential in a video statement released Thursday. No, you don't have to be providing medical care, delivering food or performing other community services. That's because almost all recreational activities are still considered "essential" in Florida.

That means "walking, biking, hiking, fishing, running, swimming, taking care of pets and surfing," are all essential, says Curry, "defined in Governor Ron DeSantis’ Executive Order." The order reopens all of Duval County beaches at 5 p.m. on Friday.
Curry cited the recent "flattening of the curve" in Florida as the reason to reopen the city's most crowded outdoor areas, meaning that even if residents pass the disease on to one another, there will likely be enough hospital beds and ventilators for patients who contract COVID-19.

So surf's up, dudes!

It's worth pointing out that the state's coronavirus cases have not leveled off. In the past 24 hours in Florida, cases are up 5 percent and deaths are up 8 percent. Florida reported 24,119 total positive cases on Friday, and the number of deaths increased to 699, up 53 from Thursday morning's numbers. Those figures, of course, don't include undercounted cases, those walking around without symptoms, and those who have been unable to get tested.

Curry, an accountant and financial advisor who was the chair of the Republican Party of Florida between 2011 and 2014, said, "This can be the beginning of the pathway back to normal life."

"Please respect and follow these limitations," he said. "Stay within the guidelines for your safety as well as for the safety of your neighbors."

Wth an estimated population exceeding 900,000, Jacksonville is by far the largest city in Florida, and the entire southeastern United States (Miami, by comparison, has an estimated 470,000 residents within city limits). The county itself has around 958,000 people, and with 794 cases of COVID-19 and 14 deaths, according to Johns Hopkins University, making Duval somewhat of a hotspot in Florida. 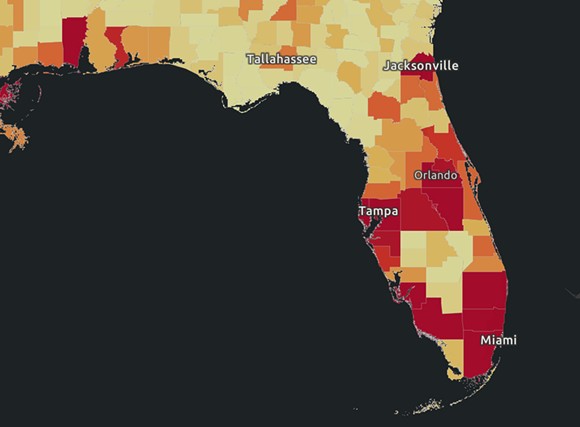 Screenshot via Johns Hopkins University
The city says limits on activities will be enforced by local police, and that beaches will open from 6 to 11 a.m. each morning, and again from 5 to 8 p.m. each evening. They will remain closed during all other time periods.

"Please be advised that you are swimming and surfing at your own risk," says the city's announcement. On Twitter, the city also clarified: "When Duval County beaches & parks open today from 5pm to 8pm it is for exercise only - No chairs, coolers, sunbathing, or towels/blankets laid out to sit on."

Parks and golf courses that are owned and operated by the city of Jacksonville will also resume normal hours starting at 5 p.m., but only for gatherings of fewer than 50 people, and all park and beach restroom facilities will remain closed, severely limiting the number of places for people to wash their hands.

"This move is so dumb that I had to make sure it wasn't fake news."

Following suit on Friday, St. Johns County announced it would also partially reopen its beaches to the public, from 6 a.m. to 12 noon, seven days a week, "for uses that include physical activity and motion." The county is just south of Duval and includes the cities of St. Augustine and St. Augustine Beach.

"Activities now permitted on St. Johns County Beaches include walking, running, exercise, surfing, biking, fishing, swimming, surfing, and other uses that require physical activity," said the city in a statement. "As lifeguards may not be on duty, all swimming is at done at your own risk."

The city council of Mexico Beach also voted Wednesday to reopen its beaches from 6 to 9 a.m., and from 5:30 to 7:30 p.m. daily for recreational activities.

Dixie County beaches have remained open the entire time, and Levy County's Cedar Key beaches are only open to residents and those with reservations. Monroe County's beaches have never been completely closed either, restricting access only to residents of the Florida Keys and limited workers.

Screenshot via City of Jacksonville/YouTube
Jacksonville Mayor Lenny Curry prepares for an April 17 interview with Neil Cavuto on Fox Business
Volusia County beaches opened up to recreational activities on Saturday, including walking, jogging, biking, fishing, surfing and swimming, and Brevard County has allowed unincorporated-area beaches to remain open to locals for walking, jogging, biking, fishing, surfing and swimming, but mayors in 16 municipalities have asked for county beaches there to close completely, according to Fox 35.

A "heat map" video of South Florida beaches made national news in March, as it showed Florida spring breakers moving rapidly to other places during the pandemic.

Meanwhile, we continue to see videos of beach runners and surfers in nearby parts of the world being chased away by cops, with one police officer in Costa Rica even firing a gun in the direction of professional surfer Noe Mar McGonagle while he ran away from the shore, before later arresting him.

Prematurely reopening Florida's beaches, especially for narrow windows of time each day, will only entice larger groups of people to hit the sand at once. While coronavirus cases have not stopped rising in Florida, the political will to maintain safety measures in public spaces is quickly falling.

In each instance, local officials are citing the governor's orders and guidelines, basing their lists of essential activities and allowable distances on Tallahassee's most recent decree. That means responsibility for this issue rests with one Florida Man, Gov. Ron DeSantis.

Only time will tell if the Sunshine State's beaches become the best new places to catch a little 'rona with your rays.

Today in Costa Rica. Surfing is not allowed. Shots are fired. Costa Rican pro @noemar_ got arrested. Please be safe out there and pay attention to any local laws, here and abroad.