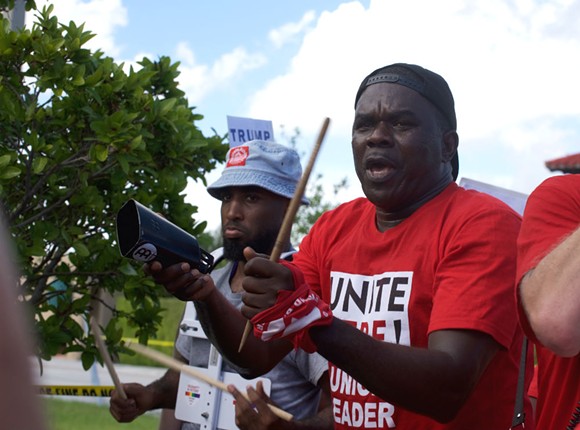 Photo by Monivette Cordeiro
Orlando workers piled onto buses for a three-hour drive to Palm Beach Tuesday to let President Donald Trump know they refuse to give up on the fight for immigration protections for Haitians.

On Monday, the Trump administration decided to terminate the Temporary Protected Status designation, known as TPS, for about 59,000 Haitians. The status that allowed Haitians to live and work in this country was granted after their island was devastated by an earthquake in 2010 that killed thousands and left more than a million homeless. The U.S. Department of Homeland Security says it will give Haitian TPS recipients 18 months to leave their homes or be deported by July 22, 2019. DHS also decided earlier in November to end similar protections for about 2,000 Nicaraguans in January 2019.

"Since the 2010 earthquake, the number of displaced people in Haiti has decreased by 97 percent," writes DHS Acting Secretary Elaine Duke in a letter announcing the decision. "Significant steps have been taken to improve the stability and quality of life for Haitian citizens, and Haiti is able to safely receive traditional levels of returned citizens. Haiti has also demonstrated a commitment to adequately prepare for when the country’s TPS designation is terminated."

Orlando hospitality workers with the UNITE HERE union joined hundreds of workers from Miami and Palm Beach to cross the bridge just in sight of Mar-a-Lago, Trump's oceanfront resort where he was spending Thanksgiving. Florida workers argue the Trump administration's decision would dramatically alter the lives of almost 33,000 Haitian TPS recipients who live in the state, along with their families. Deporting thousands would also be detrimental to the state's tourism industry, especially in Central Florida, where immigrants working low-wage jobs as cooks, janitors and maids make up the backbone of hotels and theme parks.

With cowbells, makeshift drums and songs, the hundreds of workers who gathered in front of the police protecting Mar-a-Lago chanted for a path to permanent residency. Cecilia Luis, a Disney housekeeper who makes about $300 a week, was among those protesting. With her small salary, Luis says in Spanish that she sends remittances back to Haiti that help keep her family alive.

"Sometimes, I don't eat or don't eat as well so that I can send money to my family so they can buy food," she says. "There's no work over there, so people can’t buy anything to eat. Haiti still hasn't recovered."

Luis has been living in this country for seven years since the earthquake. She makes the argument that aside from working, she pays rents, insurance and federal income taxes like any other contributing member of society – so she should be allowed to stay.

"If I have to go back, it’s not just my problem," Luis says in Spanish. "It would affect my children and my family because then I won’t be able to help them. The president has to listen to us. I think one day he will have to listen to us as human beings working in this country. I’m going to keep fighting for this. As long as you’re working and only doing good, not evil, there’s strength." 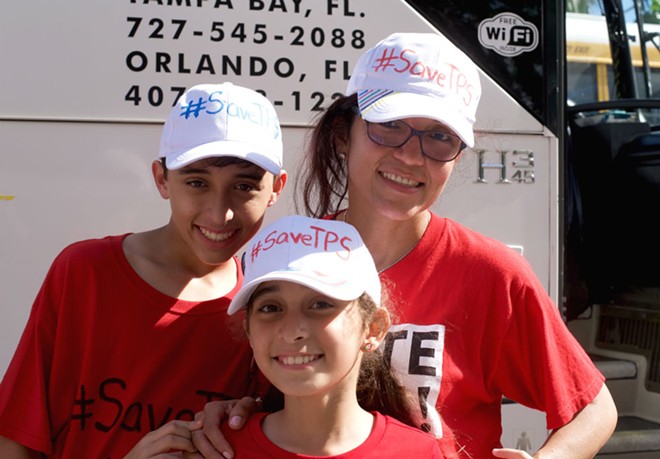 Photo by Monivette Cordeiro
Belinda Osorio and her two children
Belinda Osorio, a Honduran TPS recipient, also works as a Disney housekeeper earning $10.50. She lives in Clermont with her husband and two children at their suburban home. The Trump administration decided earlier this month it needed more time to decide the fate of about 57,000 Hondurans under special immigration protections. Osorio left Honduras in 1991, and the county’s gang-related violence has skyrocketed to unprecedented levels. If she’s forced to go back to Honduras, it will be without her family. She’s heard from family members that gangs often recruit young children into organized crime or kill them if they refuse to join. Her son is 14 and her daughter is 10.

"I want the Trump administration to know that this will not only affect me, but the rest of my family," she says in Spanish. "My husband is American, and if I leave, he would be alone to raise two kids. I refuse to take my children to live in Honduras."

In front of Trump’s so-called "winter White House," Osorio and her family wore handmade hats and T-shirts showing their support for the program that keeps them together.

"They gave Hondurans six months until they decide, and we’re going to use those six months to keep fighting," she says. "We have more support, more hope. We all came here today to support Haitians – Hondurans, Puerto Ricans, Americans citizens. We’re all here to support each other."