The phrase has been publicly displayed in Orlando before. 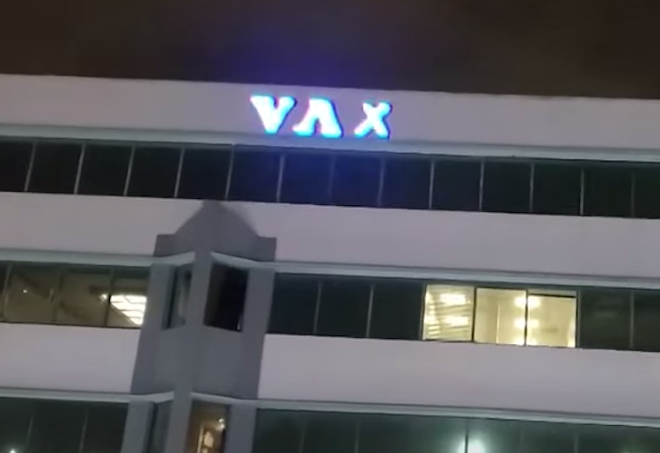 An anti-Semitic slogan was projected on the side of an office building in downtown Orlando on New Year's Eve, and no one has any answers as to who did it. Orlando police are currently investigating.

A cell phone video first obtained by Click Orlando shows the phrase "Vax the Jews" scrolling on the side of a building at the corner of Orange and Washington streets on Saturday night. Revelers crowded on the street below don't seem to notice or react to the message at all.

The grotesque slogan "Vax the Jews" has been used as a verbal cudgel by neo-Nazis before in Orlando. Late last January, a banner with those words was placed on an I-4 overpass between metro Orlando and Disney World alongside banners with swastikas, the phrase "Let's Go Branon" (sic) and the URL for hate group the Goyim Defense League. Not coincidentally, this happened on the same weekend as International Holocaust Remembrance Day.

That was an echo of an earlier incident of a sign bearing the same statement unfurled on a bridge in Austin, Texas, also by members of the Goyim Defense League, in October 2021.

Turning back locally, the NYE incident was just one of a rising number of racist, neo-Nazi and anti-Semitic incidents in Central Florida through the course of 2021.

“You continue to see this and you feel less safe,” said Keith Dvorchik, CEO of Shalom Orlando, to Click Orlando on Monday. “As someone who’s very publicly Jewish, I have concerns all the time, what if someone decides they want to target me.”

Orlando police have not issued a statement on this incident as of this writing.

Update: On Tuesday, Jan. 3, Mayor Buddy Dyer issued a statement via social media. "To the members of Orlando's Jewish community: we stand with you, united against antisemitism and hatred."


After learning about a recent display of antisemitism in our city, I want to clearly state that prejudice and hate aren't welcome in Orlando and should always be condemned. To the members of Orlando's Jewish community: we stand with you, united against antisemitism and hatred.