Amnesty for the devil: Obama gives big media a pass

Send a News Tip
Few seem to have noticed, but one of the usual suspects went unnamed at President Obama’s press conference yesterday.

The gun lobby took its deserved lumps. Congress got called out as usual. The mentally ill were addressed, as is so often the case, with something between concern and condemnation. The makers of video games even had an eyebrow cocked in their direction.

Conspicuously absent as all of this censure was being doled out: the producers of our movies and TV shows.

Remember them? They’re usually front and center when the national conversation turns to gun violence. The NRA sure loves to mention them. They even had a seat at the table last week when Vice President Biden was collating all of those opinions he was going to present to his boss. But when it came time to share the fruits of those deliberations with the nation, the non-gaming portion of the media was spared any embarrassment. One doesn’t have to be the hardest-core of cynics to wonder if all of those campaign donations paid off, and big-time. 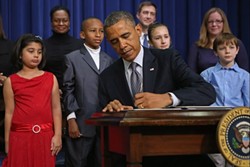 If we want to be generous about our definitions, movies and TV are alluded to, sorta, in the written text of Obama’s Presidential Order, in which he directs the Centers for Disease  Control and Prevention to study “the relationship between video games, media images, and violence” (emphasis added). So that’s one oblique reference within a series of executive actions that mostly dither about reinforcing existing laws and conducting academic studies while delegating all of the heavy lifting to a Congress that nobody (least of all our Barry) should expect to rise valiantly to the task.

Not even the politely vague “media images” language made it into the President’s remarks yesterday; a disapproving shout-out to “video games” was all we got. Maybe EA Games just didn’t pony up enough dosh in 2012?

It’s weird for a political progressive and booster of commercial entertainment like myself to be worrying that Hollywood isn’t taking enough blame for society’s ills. But drawing a line between first-person-shooter games and theatrical releases seems pretty arbitrary, especially in a world where Uwe Boll is allowed to exist. And anyway, my thoughts on the culpability of the media in real-world violence are – what’s the word I want to use here? – “evolving.” I still don’t believe that movies, TV shows or even the most violent video games are directly responsible for scenes like we saw in Aurora and Newtown: If somebody is far gone enough to even think of doing such a thing, a ham sandwich could set him off. What I’m coming to understand, though, is that media deserve scrutiny for their part in creating the culture of fear that puts all those guns out there in the first place.

Study after study has shown that popular entertainment consistently overstates the prevalence of violence in real life. An American who restricted his information-gathering to the watching of movies and TV would come away with the belief that two-thirds of the population are armed criminals just waiting to prey on the innocent. The remedy: buying as many guns as possible to fend off the “bad guys.” Making this mass delusion even worse, the outcome of that strategy is almost always depicted as a positive one. The hero dispatches his pursuers with perfectly aimed head and/or body shots, and they all fall down (often without a hint of blood to show for any of it). 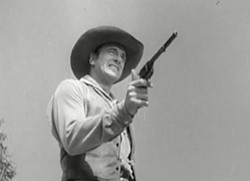 Well, you started by abandoning common sense and decency.

When was the last time a movie showed us a terrified homeowner shooting her spouse by accident in the middle of the night? Or an enraged ex-boyfriend downing six shots of whiskey and plugging the bitch that done him wrong? Or a toddler poking around in Daddy’s unlocked dresser drawer, to calamitous results? Or the mother of an inner-city youth weeping over the loss of her only son in a late-night “misunderstanding” between law enforcement and the local chapter of the hoodie brigade? Or good, well-meaning cops trying to put away a gun-toting assailant and injuring a bunch of innocent bystanders in the process? This is what gun violence is – yet we almost never see it in popular storytelling, which hews to a view of armed confrontation that’s barely more sophisticated than Gunsmoke.

The message thus conveyed is that owning firearms is absolutely necessary, and that using them carries no negative, unforeseen consequences for “the hero” (i.e., you). So given that daily barrage of highly dangerous disinformation – well, yes, I would like to see its purveyors made to think twice about what they’re doing. It might be neither fair nor productive to ask them to sweep their products of all violent content, in the hopes the real world will follow suit; you can’t whitewash your way to a peaceful world, any more than you can pray away the gay. But the alternative to a utopian fantasy is not a dystopian fantasy. Our writers, directors and actors need to start showing the world of guns as it really is. And I have nothing against the idea of the President of the United States leaning on them a little in public to get the ball rolling.

While we’re on the subject, I don’t think that pressure should stop at the communications sector we’ve defined traditionally as entertainment. Even in the run-up to yesterday’s White House non-announcement, nobody in the government was acknowledging that our so-called news sources are the biggest offenders when it comes to creating a hysterically violent national narrative. Witness the local nightly broadcast that leads with whatever bleeds (thus efficiently preying on the fears of older homeowners who just happen to spend a lot of time in front of the TV). And don’t forget supposedly liberal outfits like MSNBC, which on weekend evenings pauses momentarily from clucking its tongue over the GOP’s cops-’n-robbers mentality to become your HD home of Prisoners, Predators and Perverts.

Worst are the niche outlets that push the idea of armed resistance, often in frighteningly literal terms. How did an apparently sane individual like Nancy Lanza, who enjoyed a level of financial comfort higher than many of us will ever reach, become convinced that she needed a military-grade arsenal to protect her from a coming societal collapse in which roving bands of marauders would be coming after all her shit? The answer might be that shameless, soulless agent provocateurs like Glenn Beck spend all day telling their listeners just that. 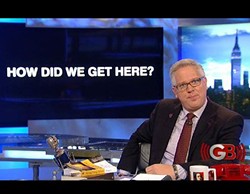 I know what you’re thinking: freedom of speech, baby with the bathwater, blah blah blah. And you’re right. No President, even one with a spine far steelier than this one’s, is going to risk looking like an enemy of the First Amendment by implicating the press in a mass shooting. But just as Obama is being canny in trying to rhetorically separate the leadership of the NRA from its membership, maybe we should also get a little bit stricter about what we as a people agree to classify as “news.” When it suits them, cowards like Beck and his former employers at Fox hide behind the canard that they’re providing entertainment, not news or even news analysis (just as World Wrestling Entertainment’s Linda McMahon once testified that pro wrestling was “entertainment” and not a sport, in order to spare her company from regulation). So perhaps a company or commentator that wants the benefits of being in the entertainment business needs to shoulder its risks as well. And that includes getting called out for pushing a counterproductive vigilante worldview when the charge is valid.

Sure, the identified parties will scream persecution. When don’t they? And if our government’s only response to a national epidemic is pitifully non-binding show trials like the one we saw yesterday, what’s the harm in naming all the right names? If we’re going to chase after paper tigers, we could at least include the ones with the sharpest teeth.