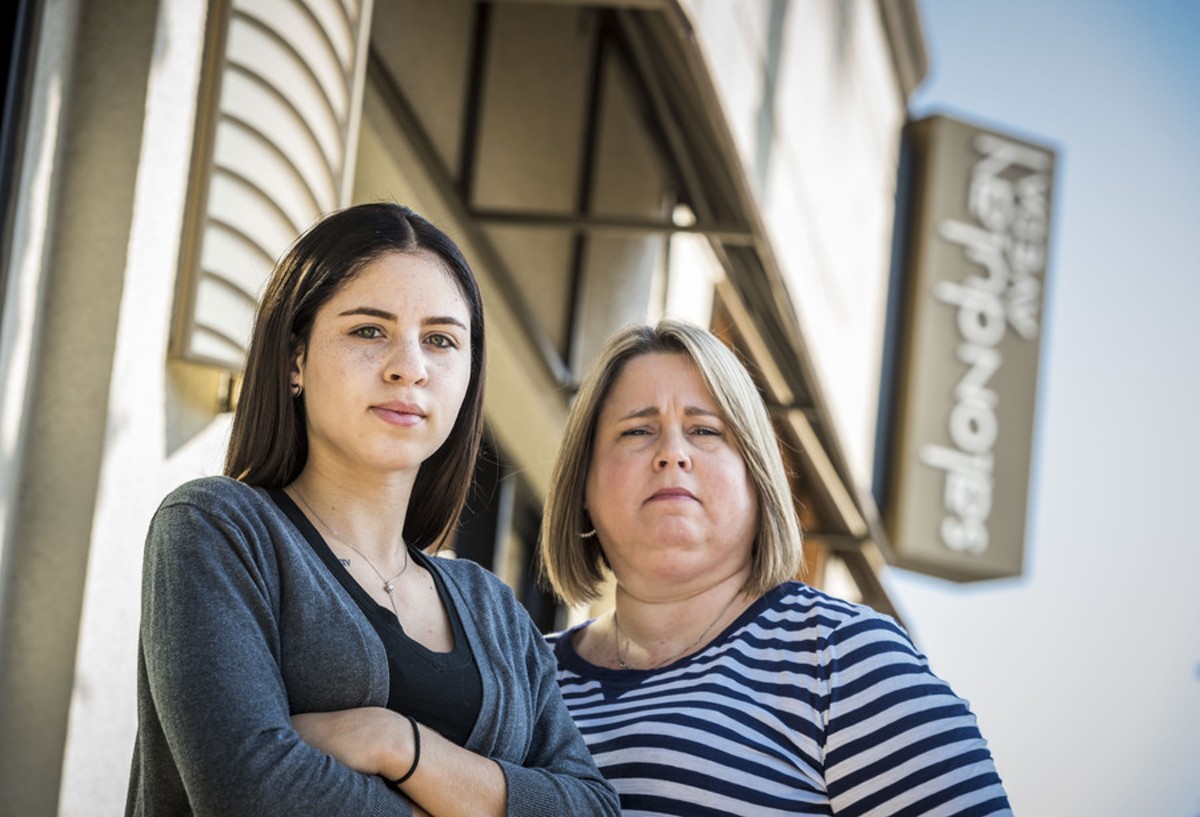 Jacquline Haas and her mother, Jennifer, in Windermere, Florida. Photo by Roberto Gonzalez for ProPublica

"A lot of kids drop out," said Sheals, the Sunshine student. Said Juslaine Touze, who also transferred to Sunshine from Evans High: "My dad didn't want me to come here. He thought this was a dropout school."

Though it claimed to have no dropouts, Sunshine reported that only 100 students graduated with standard diplomas and no special conditions from 2013 to 2015, state data shows. What happened to the hundreds of other students who exited? Based on Sunshine's reports to the state, a large number withdrew to pursue equivalency degrees.

Whitford-Narine said ALS schools will help students find GED programs if it looks like they are going to drop out. The schools also host career fairs where they bring in prospective employers and representatives of the military.

Most of the students who leave ALS schools for adult education programs have personal or family issues, worry that they will "age out" of public school at 21, or are frustrated with the time and effort it takes to earn a regular diploma, she said. "We can't save every student, we understand that," she said.

However, she wrote in an email, Sunshine reports that a student is enrolling in adult education based on what the student or parent says their plans are, rather than actual evidence of enrollment. The company does call students to urge them to come back in the months after they leave school, she said, but it does not keep a record of what adult programs, if any, students say they are enrolled in.

For the code to be used accurately, state education officials require that schools have evidence students either enrolled in an adult education class or passed the GED test, wrote spokeswoman Cheryl Etters in an email. A promise to enroll is not enough. The school district is responsible for making sure documentation in students' files backs up use of the code.

Whitford-Narine said in the statement that ALS would contact the state Department of Education for guidance and adjust its procedures if needed.

Three people who work in adult education programs in Orlando said that while they don't always know where students come from, they were unaware of a large influx from charter alternative schools like Sunshine.

"That would be well known," said Scott Weidl, an assistant director at Orange Technical College's Westside Campus, which is the closest of five adult education centers to Sunshine. "I've never seen that scenario." Joyce Whidden, who is director of a nonprofit called the Adult Literacy League of Orlando that has an adult education program, said she, too, had not heard of substantial numbers of students leaving charter alternative schools for adult education.

Even when it leads to a GED, adult education can severely limit students' options and is not viewed by the Orange County school district as a desirable outcome for students young enough to attend traditional schools. "It's not a planned path for a student," Border said.

When told Sunshine reports sending many students to adult education, Gagne, the former Olympia guidance counselor, said she was surprised.

"Oh gosh, so they don't finish Sunshine either," she said. "I assumed they were finishing getting their diploma and going on to whatever they wanted to do."

The Orange County School District is responsible for tracking whether the schools fulfill promises made in their charter contracts related to academics. District officials said they monitor ALS schools by checking metrics kept in "notebooks" at each school site during twice-annual visits.

For Sunshine, those measures include a "completion rate" that considers how many students either graduate or are continuing to work toward a regular diploma -- at Sunshine or any other school -- each year. The rate was just 42 percent of students in 2014, the school said, but rose to 59 percent in 2015 and 83 percent in 2016.

Whitford-Narine cited other statistics she said show students are benefiting from ALS schools. Her statement on company letterhead emphasized in boldface that 63 percent of students gain at least two grade levels in reading and 77 percent make grade-level growth in math after attending ALS schools for at least a semester.

When evaluating charters, the district also looks at their state ratings. For alternative schools like Sunshine, the state calculates those ratings based on gains in test scores.

Sunshine High's on-time graduation rate sunk to 3.5 percent in 2016. But it tested the bare minimum number of students required and their scores were just high enough for the school to avoid an "unsatisfactory" rating. Two ALS schools tested too few students to receive a rating at all.

Sunshine could see its contract terminated if it receives poor ratings for two out of four years -- or if it fails to test enough students for two of four years.

District officials said they have never sanctioned ALS or its schools for missing benchmarks.

"We have no records indicating these schools have had any compliance issues," a district spokeswoman said in an email.

Two years ago, the district renewed the charters of several ALS schools for 15-year terms -- which state law permits for charters with "exemplary academic programming and fiscal management." Sunshine'scontract is up for renewal in June.

Representatives from both ALS and the district said their relationship is strong.

"We have a great relationship with Orange County Schools," Whitford-Narine said. When she offered to show a ProPublica reporter around Aloma, she asked the reporter to let the school district's charter office know about the tour. The people running Aloma, the director of school choice services told the reporter, were "good people."

Back in 2014, when Olympia encouraged Jacquline Haas to transfer to Sunshine, her mother Jennifer was so fed up she wondered if she should simply pull her daughter out of Olympia and enroll her in GED classes. She fired off an angry email to school board members and Gov. Rick Scott's office threatening to do as much.

"I will be happy once my daughter is finally out of the school system and being productive and less stressed than she is now," Haas wrote.

That prospect would likely worry Olympia officials. Despite its size, Olympia sent fewer than 10 students to adult education in each of the 2013, 2014 and 2015 school years. While they aren't technically considered dropouts, they do bring down Olympia's lauded graduation rate.

After a tense meeting with Haas, Olympia developed a plan to salvage the teen's academic career. A supportive guidance counselor helped find teachers who could accommodate her learning disability, and worked to get her into the vocational classes she wanted. Jacquline took online classes after school to supplement her regular Olympia school courses.

With the extra support, she passed a mandatory standardized test and even raised her grade-point-average in her senior year to 3.49 on a 4.0 scale, lifting her four-year GPA over the 2.0 required to graduate. She graduated from Olympia in 2015. She's been cutting hair since but, for the first time, is now considering applying to college to pursue an interest in forensic science.

Haas wonders what high school might have been like for her daughter if she'd gotten help earlier. She thinks, too, about all the kids at Sunshine and other ALS schools who don't have strong advocates.

Jacquline, who was happy to finally find success, said her senior year proved her best.

"I still hated school," she said, "but I got through it."

This story was co-published with USA Today.

ProPublica is a Pulitzer Prize-winning investigative newsroom. Sign up for their newsletter.

Short on summer cash? The Orange County Clerk of Courts has over $250K in unclaimed checks

California Gov. Gavin Newsom urges Floridians to move to his state 'where we still believe in freedom'