After years of issues, Orange County looks to crack down on puppy mill-linked pet stores 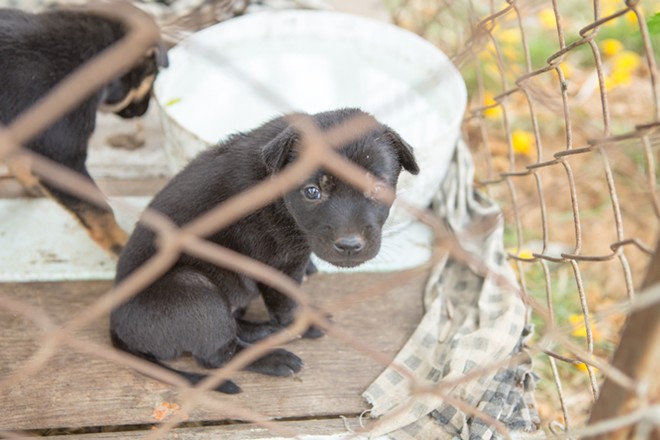 At the same time in 2019 that coronavirus was spreading across Wuhan, a bacterial infection was jumping from puppies to humans in Florida.

The Campylobacter outbreak would stretch across seventeen states. Fifty-six positive cases were found, with sixteen percent of the cases resulting in hospitalization. Campylobacter infections are a common cause of Guillain-Barré syndrome, a rare disorder where one's immune system attacks the body's nerves. The disorder can result in paralysis.

Now, Orange County Commissioners are reviewing a new proposal to ban the commercial sale of dogs from such breeders.

The county is considering two slightly different proposals. One would implement an outright ban on retail sales of commercial breed dogs and cats, while the other would grandfather in existing pet stores in the county. In April, the Orange County Animal Services Advisory Board voted in favor of the full ban without any grandfather clauses. The full ban would allow in-store adoptions to occur, with all proceeds going to adoption organizations and not the store. This is common with many larger pet stores.

The county has seen similar initiatives in the past. One such push in 2018 resulted in educational workshops for the commissioners, but the issue was dropped while the region faced an above-average hurricane season. The new proposal looks to address concerns raised in 2018 while also working to ensure it doesn’t meet the same defeat a similar City of Orlando proposal saw.
Orange County Mayor, Jerry Demings, expressed concerns with forcing a local business to shift its business plan. The county attorney pointed out a one-year grace period to allow existing pet stores to sell off their stock.

Orlando City Commissioner Patty Sheehan noted that pet stores in states with similar bans have shifted their focus to pet supplies. In California and Maryland, where similar bans have been put in place, stores adjusted to the new laws by increasing their focus on sales of food, toys, and medicine, a segment that results in higher long-term sales.

Currently, eight pet stores within Orange County sell puppies and kittens. Three are in the unincorporated county, while another three of within Orlando. The remaining two can be found in Apopka and Ocoee. The Board has already heard about the proposal twice this year.

A similar statewide bill was proposed, but it died in mid-March due to objections over language that would strip local governments from of the ability to enact stricter regulations.

Numerous other counties and municipalities in Florida have already passed similar regulations, including Seminole, Lake, Osceola, and Hillsborough. Across the state, twelve counties already have bans of some sort.

Hillsborough County first tried a grandfather clause similar to the Orange County is now considering, but after multiple issues at the existing pet stores where puppies were sold the county moved to an outright ban.
A study by The Humane Society of the United States (HSUS), one of the groups pushing for the ban, found four of the Orange County pet stores have obtained puppies from puppy mills infamous for their poor conditions.

Records from two other pet stores in the county were unable to be located despite rules in places requiring documents showing a puppy’s origin and interstate travel. Among the five stores with records, two had obtained puppies linked to puppy vendors at the heart of a Campylobacter outbreak in 2018 that saw more than one in five infections resulting in hospitalizations. Two Petland stores in Orlando were among the Florida pet stores linked to the outbreak, and the state saw the second-highest infection rates in the nation. At the time of the HSUS investigation, the county only had seven pet stores selling puppies.

Image via HSUS
A Missouri puppy mill linked to Orlando's Breeders Pick pet store.
Puppy mills in Missouri and Iowa fuel Central Florida’s for-profit puppy business. In 2018, Lee County Domestic Animal Services seized two dozen puppies as they were delivered to a Petland store in Fort Myers. Investigators found the holding pens in the delivery truck were covered in filth, and some documents for the dogs had been altered or missing. In addition, the delivery company admitted that the truck is not cleaned until it returns to Missouri, in spite of holding over a hundred dogs. According to public documents from the Missouri Department of Agriculture, that company has also provided puppies for the two Orange County Petland locations.

The HSUS investigation into Orange County pet stores found 69 percent of the puppies and kittens sold at area stores came from Missouri. Indiana and Ohio also fueled the local pipeline of puppy and kitten sales. In Iowa, a puppy mill linked to Ocoee's Chews a Puppy had a reported 319 dogs on the property. The same mill has also been cited for poor conditions of its dogs, including one that had not received veterinarian care despite having multiple wounds.

Advocates for the ban note there are multiple reasons to close the retail puppy stores. Beyond animal welfare and health concerns within the live-animal-market-style pet stores, many of them also rely on predatory lending practices that can result in some customers having to pay thousands of dollars even after their pets die prematurely. Some pet stores also offer leases for puppies, with customers mistakenly thinking they were buying the dogs.

On the website for the Petland in Waterford Lakes, a popup guaranteeing a $100 discount greets visitors. Within a Special Financing section of the puppy-focused website, the store pushes a Petland branded credit card and notes “we have additional financing options available” for those who may not qualify for a credit card. The website also guides interested customers to call the store and discuss financing options so Petland can “ensure you get the puppy you are looking for.” Commissioner Wilson brought up the predatory lending practices during the session stating documentation she acquired shows the lowest interest rate on a pet loan was 29 percent while the highest was 200 percent.

During the public comments section, multiple Petland employees shared stories of families connecting with puppies in the store and denied claims the stores were associated with puppy mills. A lobbyist, Michael L. Gonidakis, representing an association of pet stores that Petland is linked to, also spoke against the proposed ban.  Gonidakis said the source of objections were Yelp reviews and claimed if the county was going to use that metric to decide what stays open, then every restaurant would be forced to close.

The lobbying group has been waging war against the puppy sale ban. In 2017, they spent $9,000 on political donations in Georgia prior to state politicians voting to block local communities from enacting the prohibitions according to reporting done by the Atlanta Journal-Constitution. In Ohio, where Petland’s headquarters are, Gonidakis has pushed for numerous conservation efforts, most notably a successful campaign to enact restrictions on abortions within the state.

Gondakis noted his familiarity with animal welfare from his time serving as a Senior Deputy Attorney General in Ohio. During and around this time, Ohio saw multiple high-profile incidents involving exotic animals being sold as pets. The state ultimately moved to block the private keeping of exotic animals. The ban includes numerous exotic animals that had caused issues in the state before, including incidents with tigers,  and bears. In one 2007 incident, a lion terrorized a community as it attacked passing motorists.

Owners from pet stores in Orange County claimed such a ban would affect their employment numbers, with one local Petland store owner pointed to his nearly three dozen employees who may be affected by it.

Ultimately the show of force by Petland employees and an out-of-state lobbyist wasn’t enough to convince the Commissioners to go against a tide of citizens, some of which shared their own horror stories linked to local pet stores during the session. During a work session on Tuesday, a majority of the commissioners stated they are interested in passing the ban, with many seeking to expand it also to include bunnies, which are frequently subjected to conditions similar to those at puppy mills. Commissioner Christine Moore and Commissioner Victoria Siplin were the only two to speak in favor of the grandfathering clause, while the rest of the Board expressed interest in passing the full ban. Mayor Demings said he believes the majority of citizens favor the ban and, while he didn’t clarify his full position, he said his job is to listen to citizens.

Commissioner Emily Bonilla didn’t mince words calling the puppy mill-linked pet stores “disgusting” and chastised people who support them. During the session, Wilson stated she hadn’t seen comments from anyone opposed to the bill that didn’t have economic or other links to the existing pet stores.

Between February 10 and May 10, the day before the session, Mayor Demings reported receiving 996 emails in favor of the ban. Six hundred thirty-three of the emails were in favor of adding rabbits to the prohibition and reject the grandfathering of existing pet stores. In comparison, Demings reported to have received 43 emails against the ban, with “the overwhelming majority of them said that the ban is bad for pet store owners and/or their employees.” Continuing, he stated “the overwhelming majority of citizens” that had written were in favor of some type of pet store sales ban.

The next step in the process is a public hearing to allow for more public comments and adjust the proposal to include rabbits. No official timeline on when the proposal may pass has to be published. In the meantime, Mayor Demings and others point to improving federal regulations and enforcement regarding the industry.