Advocates for Medicare for All plan to uplift message of racial equity in healthcare during MLK Jr. parade in Orlando 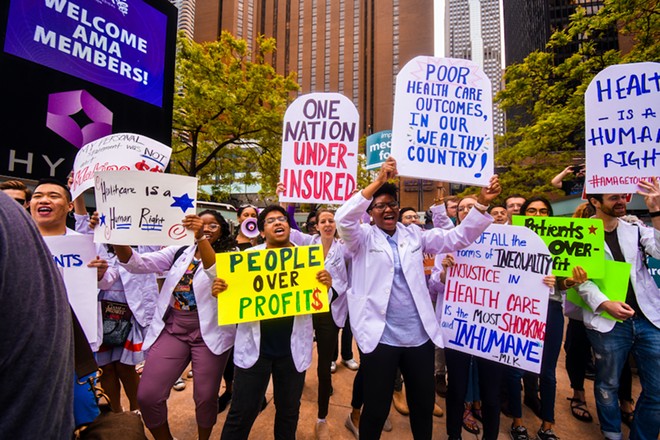 Shutterstock
Marchers at the first ever Medicare for All Rally, led by Bernie Sanders in downtown Chicago.

In his lifetime, advocates say Martin Luther King Jr. supported the idea of universal healthcare as a civil rights and racial justice policy, famously stating, "Of all the forms of inequality, injustice in health is the most shocking and inhuman because it often results in physical death."

Terri Falbo, a local advocate for Medicare for All, tells Orlando Weekly that King was "very adamant about the injustice of healthcare," as an issue that intersects with both civil and economic rights.

In recent years, advocates have emphasized racial equity as a cornerstone of Medicare for All, pointing out that uninsured rates among Americans are disproportionately high among racial minorities. According to U.S. Census data, 16.7% of Orlando residents under the age of 65 are uninsured.  Florida's also one of just 11 states nationwide that has not moved to expand Medicaid, a government healthcare program that serves low-income people. 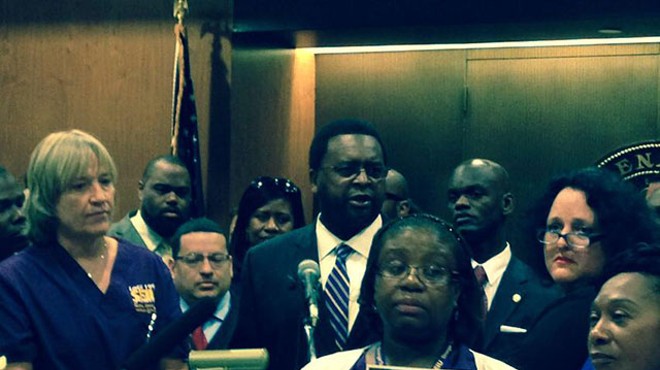 The perils of Florida’s refusal to expand Medicaid: Charlene Dill is one of an estimated 2,000 people who expected to face dire health issues due to lack of access to care


In 2019, a group of organizations advocating for racial justice, including the NAACP and A. Philip Randolph Institute, signed a letter urging Congress to advance Medicare for All legislation as a way to help reduce "long-standing biases and challenges" in the healthcare system that perpetuate racial inequity. The Movement for Black Lives has also explicitly called for universal healthcare as part of the coalition's policy platform for achieving racial justice.

In the Orlando area, U.S. House Rep. Maxwell Frost, the first Gen Z and Afro-Cuban elected to Congress, himself touted support for Medicare for All on the campaign trail.

"I've had asthma my whole life and my recent COVID has done some damage to my lungs," Frost wrote in a tweet last May. "Went to fill my prescriptions so I can breath and the total was $200. We need Medicare for All now."

I’ve had asthma my whole life and my recent COVID has done some damage to my lungs. Went to fill my prescriptions so I can breath and the total was $200. We need Medicare for All now.


U.S. House Rep. Darren Soto, based in the Kissimmee area, was one of just a handful of Florida Congress members who supported Medicare for All legislation back in 2016. But Soto has seemingly rescinded his support for the single-payer measure. He hasn't co-sponsored any single-payer legislation introduced since the 2016 bill, although advocates have called on him to renew.

[Added 11:45 a.m.: We reached out to Soto's office for comment, and received this response from his team: "Rep. Soto supports improving the Affordable Care Act, expanding Medicaid in Florida, and passing a public option to ensure access to healthcare for all Floridians. He remains open-minded to Medicare for All should a vote occur. Soto proudly voted for the Inflation Reduction Act which extends Obamacare subsidies for Floridians and believes we must make these and other reforms permanent. He is currently working with President Biden to help over one million Floridians retain health insurance as the pandemic-related Medicaid “continuous coverage” comes to an end on April 1.")

In August, advocates delivered 300 petition signatures in support of Medicare for All legislation to Soto's office, along with sign-on letters from 20 unions and other organizations.

"Our lives have been in the hands of for-profit health insurance and pharmaceutical companies for too long, and the damage this has caused to our families and communities cannot be undone. But a different future is possible with Improved Medicare for All," a petition from Medicare for All Florida, directed at Rep. Soto, reads.

In the state legislature, local Democrats like Reps. Anna Eskamani, Rita Harris, Victor Torres, newcomer Johanna Lopez, and former Rep. Carlos Guillermo Smith have also expressed support for single-payer, per Falbo. Former Rep. Smith was a co-sponsor of a bill in 2019 that would have created a state program for the purpose of "providing comprehensive universal single-payer health care coverage." A similar bill was filed by Torres in the state Senate. Both failed to reach their respective floors for a vote.

"In order for this to really happen in this country, we're really going to have to build a big movement that identifies that the big insurance companies and Big Pharma are kind of like what's holding us back," said Falbo.

In addition to Orlando, members and allies of Medicare for All Florida also plan to attend MLK Jr. events in Apopka, Ocoee and Eatonville to share information about single-payer and to pass out QR codes for their petitions in support of the policy.