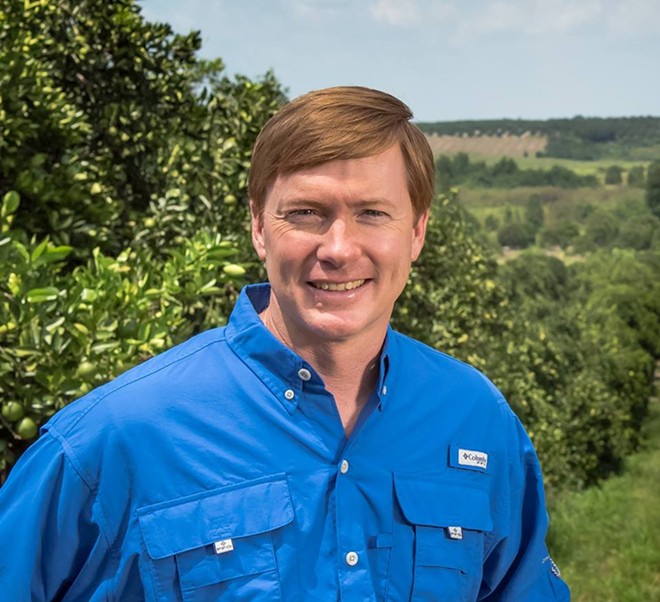 Photo via Adam Putnam
Standing in front of a huge Florida flag covering the stately pillars of a century-old county courthouse with orange crates on the steps, Republican Adam Putnam on Wednesday used a combination of small-town nostalgia, conservative politics and a deep knowledge of his home state to launch his gubernatorial campaign.

“I can't imagine a better place to announce I'm running for governor of the state of Florida,” Putnam said, with his former high-school principal and the Bartow High School “Yellow Jacket” band nearby and surrounded by family members and friends who grew up with him in the Polk County town of less than 20,000 people.

“We have to put Florida first so that we are more than a prize for a life well-lived someplace else,” Putnam said. “We can make Florida the launch pad for the American dream.”

Putnam, the state's agriculture commissioner and a fifth-generation Floridian, enters the 2018 race as the leading candidate to replace Gov. Rick Scott, who will leave office because of term limits and is expected to run for the U.S. Senate.

Putnam, 42, brings a wealth of political experience to the campaign. Beginning as a 22-year-old, he served in the Florida House and then moved to Congress, where he spent a decade and rose to the third-highest Republican leadership post in the U.S. House. He was elected to the state Cabinet in 2010 and will finish his second term as agriculture commissioner next year.

Robert Beattie, a 60-year-old Republican who worked nearly three decades in the phosphate industry as a welder, said he likes Putnam's experience.

“I appreciate that big time,” said Beattie. “His experience, his breadth and knowledge of what's going on in Florida.”

In his 16-minute speech, Putnam, dressed casually in a long-sleeved blue-checked shirt and khaki pants, emphasized his small-town roots, growing up in a citrus and cattle business that his family founded. He recalled the freezes of the 1980s that devastated the crops.

“I learned at an early age about riding groves late at night, checking pumps and checking temperatures and assessing the damage the next morning and moving forward,” he said.

He talked about raising his prized horned Hereford bull, named “Georgia Boy,” for a 4-H Club project in a pen that once existed a few blocks from the courthouse.

“Hard work. Responsibility. Perseverance. These are common values,” Putnam said. “But in our society today, they are all too rare.”

How well Putnam's agrarian roots resonate with Florida's urban voters remains to be seen. But talking to reporters after his speech, Putnam drew connections between Florida's diverse regions.

“As you know, Palm Beach is one of our top ag-producing counties in the state, and so is Miami-Dade. It's not us against them,” Putnam said. “We have an opportunity to diversify our economy and build on our pillars of agriculture, tourism and construction and create new opportunities so that young people who grow up in a town like Bartow don't have to leave to find good work.”

“His message is right in line with where Florida and the nation needs to be,” Stargel said. “We need to get back to the basics of who we are. We are about family, personal responsibility and less government. That's his message, and it's the right message.”

Polk County Sheriff Grady Judd reinforced Putnam's conservative credentials, calling him “honest and ethical” and praising him for making it easier to apply for concealed-weapons licenses.

“Because of Adam, today it is easier than ever to protect and defend your family and loved ones,” Judd said.

Putnam said he would “protect” the Second Amendment rights of Floridians. “In Florida, we take those seriously,” he said.

Putnam also said law enforcement officers and military veterans would be “recognized and honored” in his administration. Echoing a Scott policy, Putnam said he would make Florida the nation's “friendliest” state for military members and veterans.

With $7.7 million on hand in his “Florida Grown” political committee through March 31, Putnam already has a significant financial advantage in the race. But he could still face Republican challengers, including House Speaker Richard Corcoran, a Land O' Lakes Republican who said he is looking at the governor's race but will not make a decision until after the 2018 legislative session.

Putnam said he is prepared for a potential challenge.

“I'm a Bartow-raised farmer, and I am a conservative,” Putnam said. “Anyone who wants to run for governor is more than welcome to pack a lunch and come on.”

On Thursday, Putnam will begin a 10-day bus tour that will take him across the state from Miami to Pensacola, ending May 20 in Suwannee County.